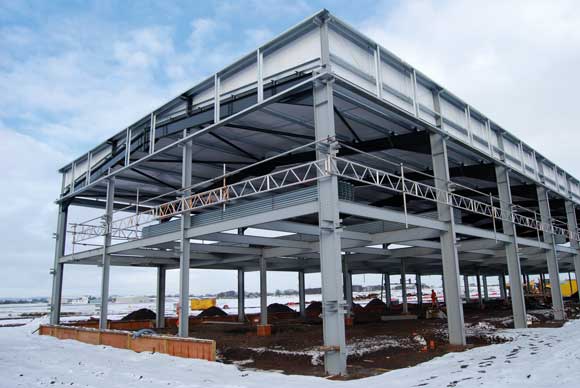 Inclement winter conditions did not prevent the steel completing on time

Carlisle Lake District Airport has received significant investment to build a new steel-framed terminal building, which will allow the facility to begin commercial flights this summer.

The Cumbria Local Enterprise Partnership (LEP) has provided the investment, which is being used to improve the runway and build a new terminal building.

The work has also proven to be the catalyst for the Stobart Group, which owns and operates Carlisle Lake District Airport, to announce that it plans to begin commercial flights to London Southend Airport, Belfast and Dublin from 4 June.

Cumbria Chamber of Commerce CEO and Board Member of Cumbria LEP Rob Johnston says: “Carlisle Lake District Airport is crucial to Cumbria’s growth ambitions. It is a key strategic asset for the county. Developing the airport’s passenger offer will play an important role in maximising Cumbria’s tourism potential, as well as allowing easier business travel to and from the county.” 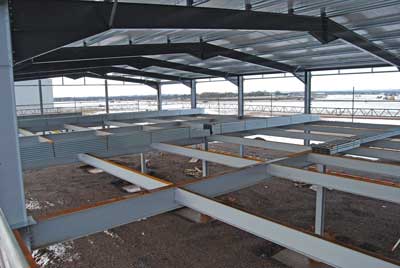 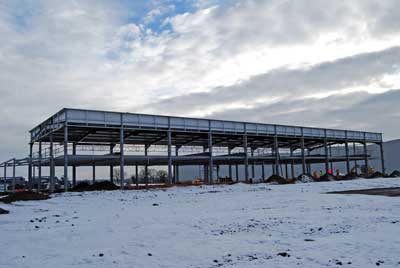 The terminal is 60m long and has two floors

It is also hoped the airport will aid wider economic growth, and reinforce the county’s position in the nuclear and renewable energy sectors, as the facility has the potential to become a regional logistics hub.

This is borne out by the fact that a 21-acre distribution scheme, known as Eden Park, has begun on a previously unused part of the airfield.

So far one Stobart-owned steel-framed air freight distribution centre has been completed, but several more, ranging in size from 1,400m² to 30,000m², are planned in the near future.

A new roundabout on the A689 and an access road have been completed to serve the initial distribution centre amenities, which will also link to the new terminal.

Construction work at the airport began towards the end of last year with completion set for the end of May. As well as resurfacing the 1,800m-long runway, the works consist of the construction of a new steel-framed terminal building along with associated aprons, taxiways, car parking and a new airport access road.

Located on a previously unused part of the airfield, the new two-storey terminal building will accommodate offices on the upper level, with the arrivals/departures lounge, baggage area and a cafe on the ground floor.

Sat on pad foundations, the terminal building was always going to be a steel structure according to Stobart Rail & Civils Project Manager Roy Hill.

“A steel portal design was the preferred method because of the project’s location and for the speed of construction.”

Border Steelwork Structures has been employed as the design and build contractor for the building, as well as the flooring, roofing and cladding installer.

Highlighting the speed and ease of the steel construction process, the entire frame was erected in less than two weeks and all of the beams and columns were transported to site from Border’s fabrication yard in Annan in just two truckloads.

The structural frame uses a composite design with steelwork supporting steel metal decking and a 150mm-deep concrete floor topping. The building’s 457UC perimeter columns are spaced at 6m centres and the overall dimensions of the structure are 60m-long x 18m wide.

The majority of the internal steelwork will be left exposed along with soffits and services – positioned below the first-floor slab – giving the facility an industrial look.

The upper floor has a clear 18m-span, offering column-free flexible modern office space, while the ground floor has a central row of internal columns positioned at mid-span, creating the most cost-efficient design for the building.

Once the composite steel frame, metal decking and roofing were installed, Border then created a full watertight envelope by cladding the elevations with Kingspan insulated wall panels.

“The panels are an anthracite colour and the cladding creates curved corners at each end of the building to form the desired modern crisp-looking structure,” explains Ashton Smith Associates Project Architect Rob Brown.

Summing up, Stobart Group Head of Corporate Projects Kate Willlard says: “We are working with our partners to develop packages and promotions to make sure that our air services match the needs of our visitor.

“We will then be able to attract more visitors to Cumbria and the surrounding area and support the local economy through the development of a sustainable airport.”

Carlisle Airport began life in 1941 as RAF Crosby-on-Eden, a base used to provide day training for Hawker Hurricane pilots.After the war it closed and the airfield was returned to Carlisle City Council.

After a refurbishment programme in the 1960s commercial flights were offered to London, the Channel Islands and Belfast.