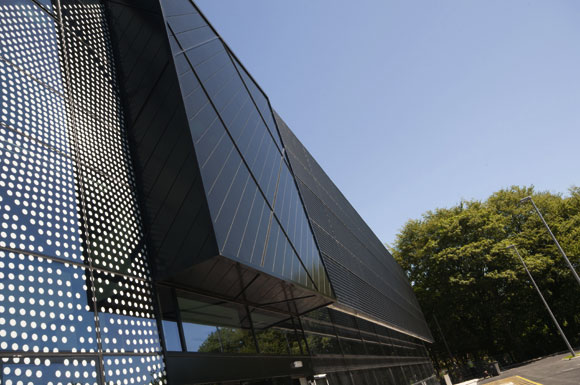 A mixture of cladding systems gives the Centre a unique appearance 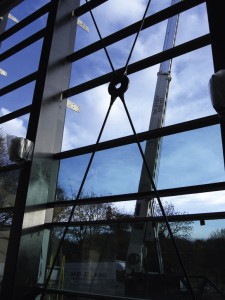 Feature bracing has been inserted around the structure’s perimeter

Main client: Lancaster University
Architect: FaulknerBrowns Architects
Main contractor: Galliford Try
Structural engineer: SKM Anthony Hunt/WYG
Steelwork contractor: The AA Group (TAAG)
Steel tonnage:420t
Forming part of a £350M investment programme, a new £17.5M sports centre has opened at Lancaster University; a multi-purpose facility which has made significant use of structural steelwork for its large open plan halls as well as achieving a BREEAM ‘Excellent’ rating.Constructed on a brownfield site overlooking playing fields within the University’s grounds, the sports centre replaces a much older facility dating back to the 1960s.

The rectangular steel framed structure which measures 85m × 60m, utilises a second floor in places. It is sub-divided into two main volumes – the pool, climbing wall, fitness rooms and sauna/steam room, and the sports hall and squash courts area.

“Steel was chosen for the design primarily because of the clear open spans we needed in the pool hall and sports hall,” explains FaulknerBrowns’ Project Architect Rob Summerson. “However, cost efficiencies also played a part in the decision as well as the fact that steelwork, primarily in the pool area, could be left exposed as an architectural feature.”

The pool hall takes up the front third of the overall building, with the Centre’s main entrance foyer alongside. The pool structure has been constructed with RHS sections for columns and beams, creating a large 18m-high goal post formation.

“The RHS members were brought to site in sections and then butt welded,” explains Kevin Nickson, TAAG Project Manager. “The horizontal part of the frame required one 22.5m-long section.”

As well as the exposed steelwork in the pool area, the RHS structural frame has enabled the entrance foyer to have a fully glazed partition wall separating it from the swimming zone.

“This is another architectural feature,” explains Mr Summerson. “People entering the Centre are treated to views into the swimming pool, while the glazing also opens up the foyer giving it an airy feel.” 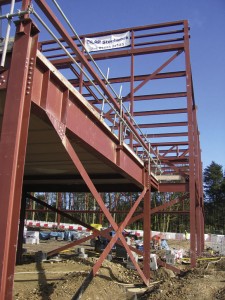 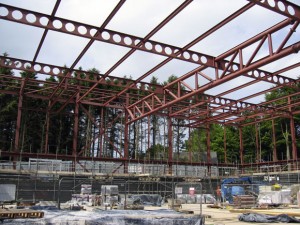 Beyond the pool, the two-storey segment of the building is heavily braced between bays, as this was deemed the best place to locate cross bracing. Lacking any sizeable lift or stair cores, this bracing gives the structure most of its overall stability.

The sports hall which also occupies approximately one third of the structure’s footprint has been formed by one large 1.5m deep truss which spans 38m across the hall, with a series of cellular beams, supported from this member, spanning 35m in the opposite direction.

The truss was brought to site from TAAG’s Skelmersdale yard in halves, welded on the ground and then lifted into place in one piece. Likewise, the cellular beams were too large to transport as complete sections, and again were assembled on site.

Main contractor for the project, Galliford Try, says flexibility also played a key role in the decision to use steel. Many of the changing rooms and offices have been built around a standard grid pattern, but these partitions could be removed in the future allowing some of the internal layout to be altered. This possible procedure would be extremely difficult if concrete walls had been constructed.

As Kim Montgomery, Lancaster University Head of Sport, says: “ The open airy spaces and architectural design of the Sports Centre makes it not only a pleasure to be in but lifts the performance of our athletes – we envisage it will be a popular destination for National sporting bodies, and teams too.”

An array of facilities 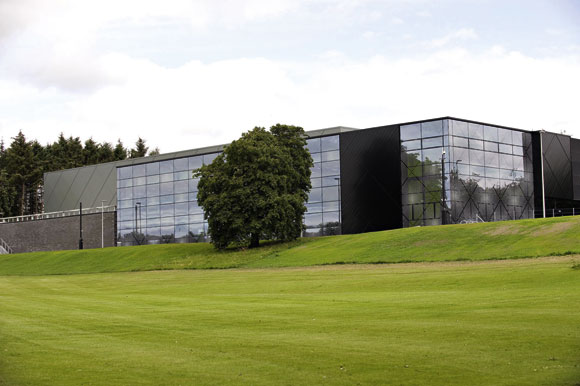 As well as a 25m long eight lane swimming pool the Sports Centre contains  a sports hall designed to accommodate numerous sports such as badminton, netball, basketball, 5-a-side football and many other sports. The Centre contains a 10m-high climbing wall, while in an adjoining area there is a 100 station two-level gym and four glass-backed squash courts on level two. The centre also incorporates a health and fitness suite with a sauna and steam room.

Kim Montgomery, Head of Sport, said: “The completion of this building marks a new dawn for sport at Lancaster. Our elite performers have state-of-the-art facilities to train and develop while recreational users can also reap the benefits.”