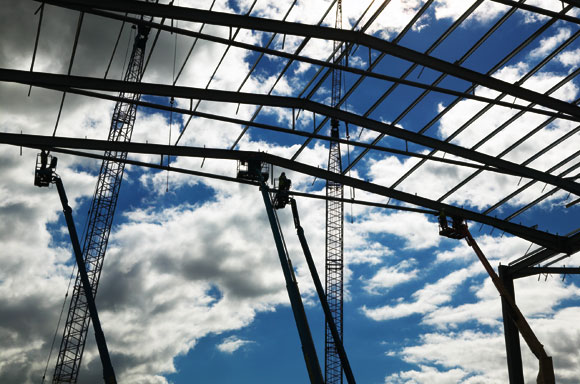 Designing one of the UK’s largest ever distribution centres required some close cooperation between Atlas Ward and its software provider.

Two adjacent portal frame warehouses with a combined floor area of more than 1million/ft² represent the UK’s largest single site distribution centre, and one of the largest currently under construction in Europe.

Situated on Brookfields Park – a large new commercial development on the outskirts of Swinton, South Yorkshire – the two warehouses have both been let to a single customer and will be used as a distribution centre for household fabrics and clothes.

Working in conjunction with main contractor Bowmer & Kirkland, Atlas Ward began steel erection in June and finished the majority of its work in October. Fit out of the two warehouses also began in October with the client scheduled to move-in in March.

Justin Watts, Bowmer & Kirkland Project Manager said: “The warehouses have footprints of 410,000ft² and 710,000ft² respectively. Both have maximum 21m clear haunch heights with the smaller unit consisting of six spans, and the larger building consisting of 10 spans.

Warehouses of this size are uncommon, and consequently during the design stage Atlas Ward stretched the capability of CSC’s Fastrak Portal Frame Design software to facilitate the design procedures required.

Ian Bell, Atlas Ward Structural Design Coordinator for the project, says: “Atlas Ward appreciated the technical software support that was provided by CSC in order to ensure that we were able to provide a cost effective and efficient design for the 10 span portal frame structure.”

Another challenging aspect of the design work was the large mezzanine floor area in the larger warehouse. This unit has an overall footprint of 300m x 220m, with the mezzanine level measuring 300m x 70m.

Mr Bell explains: “The mezzanine level was designed as a free-standing structure supporting heavy imposed loads (up to 20kN/m²), with the rest of this area of the warehouse, a 300m wide x 16m high portal frame, sitting on top of it.”

More than 1,300t of structural steelwork was used for the mezzanine level which sits 5m above the warehouse floor level. Above this level Atlas Ward had to support provision for an upper proprietary floor system. This floor system does not form part of Atlas Ward’s contract, but the floor columns supporting the heavy mezzanine are extended to the upper level and designed to support the upper level grillage.

As well as storage space, both warehouses contain office blocks. Inside the larger unit there is a 50m-long x 12m wide two-level office, while in the other there is another two-level block measuring 13m wide x 54m long.

Because the buildings are distribution centres both required large open plan areas. Consequently, the bigger structure has nine 28.6m spans and a single 43m span, and the smaller unit has five equal spans of 33m and one span of 38m. Both have alternate internal columns on the valley lines removed.