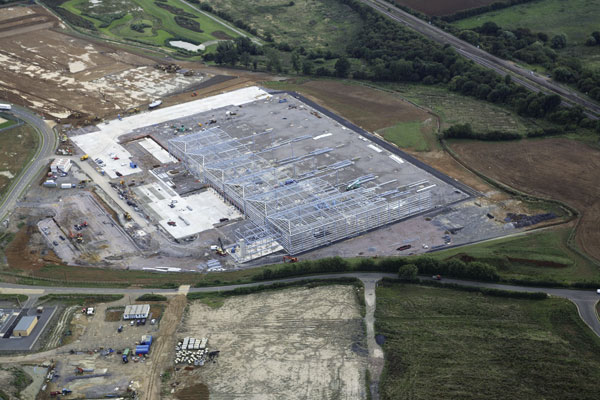 The third distribution project to be undertaken by Atlas Ward Structures for main contractor Winvic and industrial developer ProLogis in Kettering is underway.

The latest structure, being built on a speculative basis, is 256m wide and consists of eight 32m wide spans, and is 138m-long with 17 bays each measuring 8.1m.

Atlas Ward has designed, fabricated and is erecting more than 1,000t of hot rolled structural steelwork for the project and 250t of cold rolled steel.

Vance Lamb, Project Designer for Atlas Ward said in order to create a larger open span area within the warehouse every alternate internal column was omitted. “We used UB longitudinal girders to support the rafters where the columns have been omitted,” Mr Lamb explained.

Mr Lamb said the smallest block, known as a ‘hub’ office is a 12.5m long x 8m wide two storey building which will be used to monitor truck movements. The other office will function as the main administration block and is a three-storey building measuring 31m x 20m.

Atlas Ward has now erected more than 4,500t of steelwork for three buildings on the ProLogis Park in Kettering.