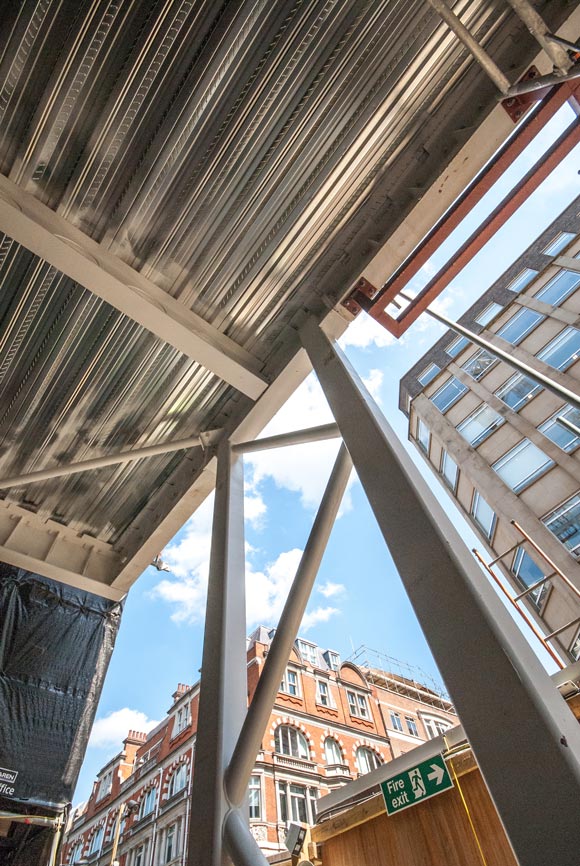 Situated on the corner of two renowned central London streets, a new retail and office development is set to be a sought after address.

The property market is buoyant in this part of the capital and a number of new retail and commercial developments are currently under way. A prime example is a new six-storey development on the corner of Conduit Street and Savile Row. 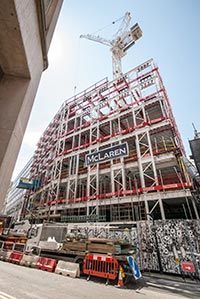 The topmost office floor is stepped back slightly, allowing the structure to fit into its surroundings with a similar design to its neighbours, while also creating a terrace for the future occupants.

“This is a very prestigious project in a very sought after location,” says Andy Case, Site Manager for main contractor McLaren Construction. “By demolishing the two old buildings and combining the sites into one, we’ve maximised the plot efficiently and cost effectively.”

McLaren started clearing the site during the summer of 2013. Early works also included enlarging the existing basement to cover the entire site’s footprint.

Upwards from the basement slab the structure is formed with a steel frame that uses a centrally positioned reinforced concrete core as well as perimeter bracing for its stability.

“A steel frame was the best option for this site,” explains Pal Seyan, Capita Project Engineer. “Early in the design process the project team evaluated all framing options; by using steel we have been able to deal with the site’s constraints as well as maximising the number of floors.”

All of the floors have been erected using slim 450mm deep Westok cellular beams. They span a long grid arrangement of up to 10m, and this has reduced the number of internal columns to one, allowing architectural freedom within the building. Importantly the passage of the services through the web of the Westok beams has reduced the floor depth and allowed the structure to have the optimum number of floors.

One of the biggest constraints for this project, as for many inner city construction jobs, has been space, or the lack of it. Roads along two elevations and existing properties abutting the other two sides leave no room for materials storage and scant room for deliveries. 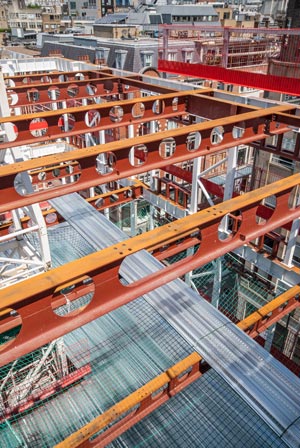 Cellular beams have been used for service integration

All deliveries are made via the site’s laydown zone on Savile Row. Coordination is key and steel deliveries have all been made on a just-in-time basis. Using the site’s one tower crane, steel sections are invariably lifted straight off of the delivery truck and then erected almost immediately.

“Because the site is very confined we had to erect the steelwork in phases, doing half the building from basement to third floor, using the vacant part of the site for temporary steel laydown,” says Bobby McCormick, BHC Project Manager. “Once the first half of the structure was up, including the metal decking and concrete topping, we then erected the other half using the completed frame for steel laydown.”

BHC then repeated this sequence for the rest of the structure from levels three to six, with the rooftop plant area done as the final piece in the steel programme.

A slim construction approach has also been incorporated in the design of the project’s perimeter columns. These are twin RHS sections connected by CHS bracing, designed to be as slim as possible in order to fit the architectural vision and to maximise floor space by being unobtrusive.

The columns resemble trusses and were delivered to site in three-storey lengths, fully assembled with their connecting bracing.

By utilising offsite construction the project team has benefitted from a quicker erection programme, while erecting three-storey high elements has also meant the tight tolerances for the cladding have been easier to accommodate as line and levelling didn’t need to be done on each floor level. 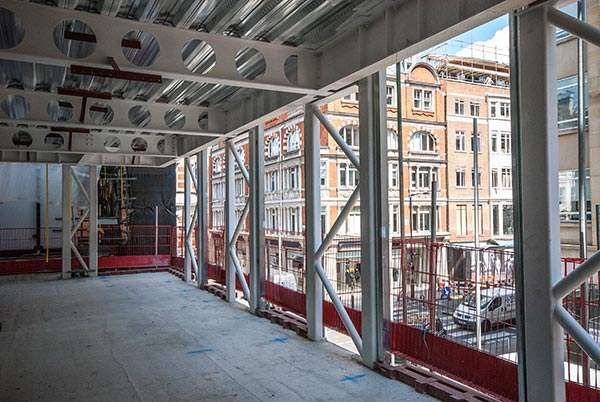 According to EPR Architects the project’s architecture wholly integrates art into the fabric of the building by using a bespoke glazed ceramic tile to the main elevations. The approach was developed in collaboration with renowned ceramic artist Kate Malone, adding richness and intensity to the building.

The use of projecting and recessed window treatments addressing Savile Row and Conduit Street provides depth to the façade, enhancing the unique hand glazed elevations.

These feature windows are formed with cantilevering box section and angle section frames that have been bolted to the perimeter floor beams.

The grain of the Mayfair Conservation area is further reflected in the façade treatment through the use of ceramic tones, preserving the historic plot widths created when Savile Row was extended to meet Conduit Street in the 1960’s.

The building’s strong identity draws on this character and culture within Savile Row celebrating the prestigious arts and crafts nature of the local historic area synonymous with tailoring traditions.