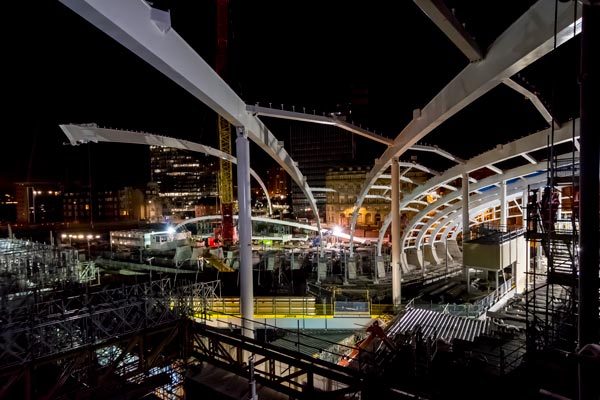 The centrepiece of Manchester Victoria station’s restoration and conversion into a regional transportation hub is a curving steel framed roof. Martin Cooper reports.

The station dates back to 1844 and in recent times its large train shed had fallen into a state of disrepair, so much so that in 2009 a report commissioned by the Department for Transport labelled it Britain’s ‘worst station’.

A central part to the redevelopment plans is a huge steel framed curving ETFE clad replacement roof structure which will cover not only two terminating railway platforms and the main station concourse, but also the Metrolink tram stops, as well as entrances to the adjacent Manchester Arena.

The works are being undertaken without any disruption to rail services or to the Metrolink tram lines that run through the site. The only discernible alteration to local transport links is the fact that tram passengers cannot alight at Victoria but have to use the nearby Shude Hill stop for the duration of the construction programme.

“Keeping the station functioning is one of our biggest challenges,” says Faisal Farooq, Network Rail Scheme Project Manager. “Most of the work can be done during the day, but in order not to disrupt transport we have to lift steel roof rafters and their columns into place during three-hour night time rail possessions.”

Main contractor Morgan Sindall completed demolition of the station’s old wrought iron roof last year and work to erect the new structure started last May. As well as this work the project team has also completed an extensive groundworks programme, while refurbishments including work to the Grade ll listed station buildings will continue into next year.

On plan the new roof structure infills an L-shaped area bounded on two sides by the existing station buildings and the Manchester Arena. The structure then curves along its front elevation to link these two buildings.

“The curve in the roof structure aligns with the Metrolink tram lines and brings them into the new transport hub,” explains Ronan Connelly, BDP Lead Architect.

The roof is formed with 15 curved steel ribs that are bolted to 4m-high concrete buttresses at ground level and then arch over the station to be supported on 18m-high CHS columns.

“All of the ribs then cantilever from the columns towards the existing station buildings without actually touching them,” explains Gary Dooley, Severfield Project Manager. “The idea was to avoid putting extra loads on to these listed buildings.”

The steel ribs are fabricated from box sections, 1.2m deep and 500mm wide with 50mm thick top and bottom flanges and 20mm thick side plates. Each of these ribs is made up of welded sections that are up to 27m long.

After fabrication at Severfield’s Bolton facility, the rib sections were delivered to site and then welded together to form a single rib, weighing up 86t and with the longest being 96m. 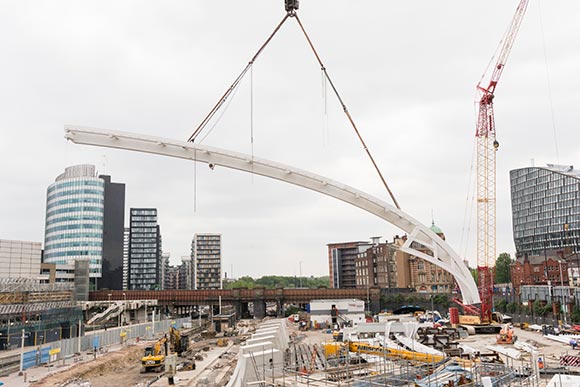 After assembly the ribs are lifted into place in one piece

On site Severfield had just enough space for an assembly area that included a system of trestles that allowed five ribs to be welded and stored simultaneously.

The erection process was conducted in three tranches, with five ribs erected in each. Each rib was lifted as a single piece and connected at buttress and column locations simultaneously.

“For the installation of the first five ribs we used a mobile crane as we could get close to their final position. However, all of the other ribs are further away from the assembly area so we needed to bring one of the UK’s largest crawler cranes on to site,” says Mr Dooley.

The crane in question is a huge 750t-capacity crawler crane with a maximum reach of 106m, which was easily sufficient to lift any of the ribs into place.

All of the ribs were erected during one of the project team’s three-hour possessions. Each rib was installed along with its supporting column and enough purlins (secondary steelwork) to connect to the adjacent rib and make the section stable.

The ribs are precambered so that when it deflects under its own self-weight, it pulls the member into its final geometry. The supporting CHS columns have been designed to lean towards the buttress in the temporary condition so that, as each rib is lowered and adjusts under its self-weight, the column is brought to plumb. Only then could the column base and buttress connections be made permanent.

The steel erection programme was completed in early September, and the entire station project will be finished in spring 2015. 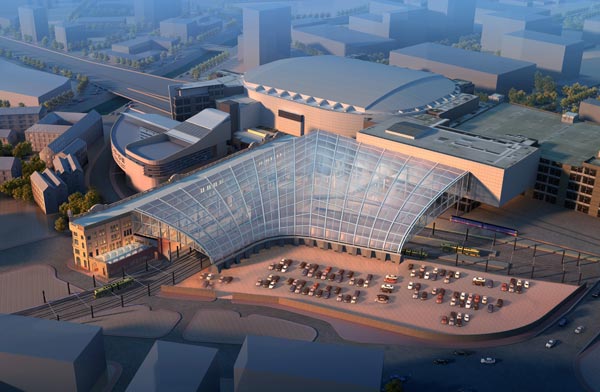 “We looked at a number of materials such as timber, but steel offered a quicker erection programme and the best way of achieving the required long spans,” says Ronan Connelly, BDP Lead Architect.

“We then chose to use steel box section ribs as they are economical and provide fewer ledges for pigeons to roost upon than trusses.”

A lightweight structure was also important as a culvert runs under the site and this, as well as the site’s railway tracks, limit the locations where columns could be placed.

Choosing lightweight ETFE cladding has also allowed the steel ribs to span further than if glazing had been specified.