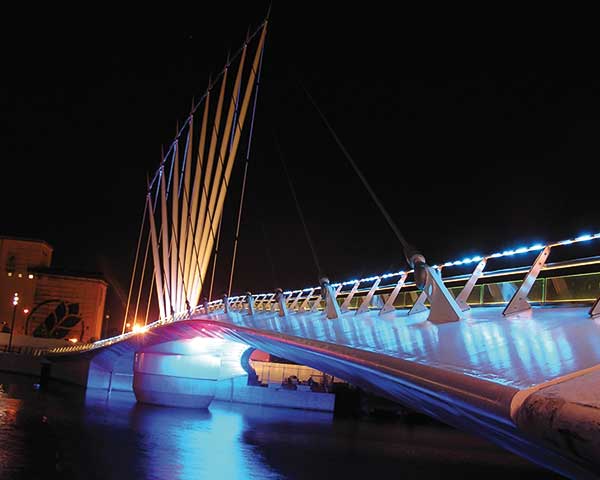 Spanning the Manchester Ship Canal, the Footbridge is a signature element within a large scale regional redevelopment.

The £8.3M Footbridge links the MediaCityUK site at South Quay with the adjacent Imperial War Museum North by spanning the Manchester Ship Canal. As well as enhancing access between the two sites, the bridge has also been designed to be a symbol of regeneration and a marker for further development.

The structure is an asymmetric cable stayed bridge incorporating a main span that pivots through 71 degrees to allow large vessels to pass along the canal.

It comprises of two spans; the main pivoting span crossing the Canal is 63m long, with a short back span of 18m. The back span was constructed as a hollow steel box and then filled with concrete to form the bridge’s counterweight for balancing the main span during opening. 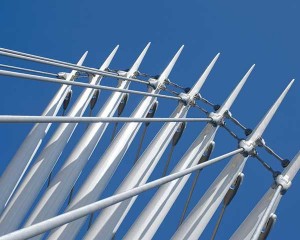 “The design was driven by the site’s constraints,” says James Marks, Wilkinson Eyre Associate Director. “We had to make sure the Canal could still accommodate large vessels and so the pivot point is on one side of the bridge, keeping the navigation channel clear.”

Steve Thompson, Ramboll Project Engineer agrees and adds: “We’ve created a landmark structure for the area, one which has met all of the necessary criteria.”

The asymmetric form of the bridge’s deck utilises a fanned array of eight, shaped CHS steel masts that converge at their bases atop a sculpted pedestal. The masts are up to 30m tall and support the bridge deck via high tensile steel cables anchored to the east side of the deck.

The deck is supported at 6m centres by the steel cables, which are anchored at their upper and lower ends using fork connectors onto steel outstand lugs aligned in the plane of the stays at the mast tip and deck connections. 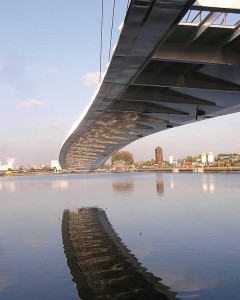 “The most economical method of constructing this bridge was to fabricate as much of the structure as possible offsite,” explains Gareth Summerhayes, Rowecord Engineering Contract Manager.

To achieve this the majority of the structure was delivered to site in modular sections, which were then welded together and assembled adjacent to the bridge’s final position.

Prior to the spans being assembled Rowecord first had to install the steelwork for the pivot bearing. The pivot for the bridge comprises a large steel casting welded into the pivot zone of the steelwork deck and mounted on a slewing bearing, which in turn is supported on a fabricated steel structure.

The bridge was erected on the quayside in its entirety, including the masts and cables. A temporary framework that supported the masts was then struck, the bridge was slid into position and final adjustments to the cables were carried out once the bridge was lowered onto the slewing bearing.

The details of the structure and attachments are well considered and executed. This is analytically courageous and technically accomplished, say the judges.