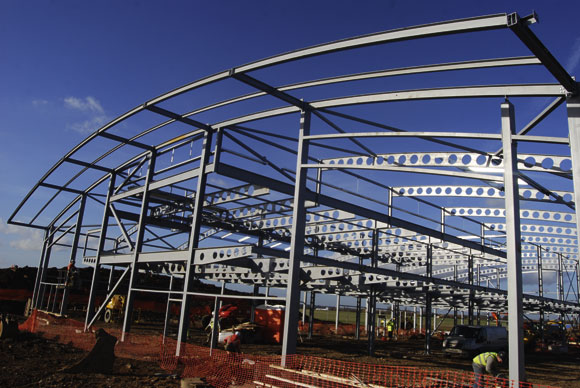 Major developments are taking place at Southend Airport with the construction of a new terminal building central to the facility’s plans to be a gateway to the London 2012 Olympic Games. Martin Cooper reports.

During the 1960s Southend Airport was the UK’s third busiest airport, catering to cross channel short hops and package holiday airlines. In the intervening years other southeastern airports have grown up and overshadowed Southend, but the facility has big plans and current developments will see a significant increase in passenger numbers by as early as next year.

Currently the airport serves some 48,000 passengers per annum, with the main obstacle to increasing this figure being its short runway, which is unable to cater for new, modern and fuel efficient aircraft. This is being rectified as planning permission has recently been granted for a runway extension which will allow the airport to attract more services.

Other recent developments have seen a new steel framed control tower constructed, a building which is better situated to observe the entire airfield than the existing tower; and a railway station has been constructed which will offer direct train services to London Liverpool Street Station and Stratford International.

To cope with the expected increase in passengers Buckingham Group is constructing a new terminal building, a contract that is central to the airport’s overall expansion plans. This contract also includes the building of a diverted taxiway and five aircraft stands. 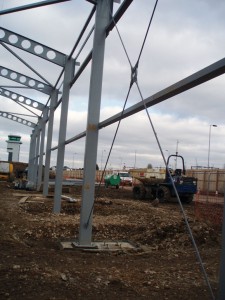 Feature rod bracing along the main elevations will remain exposed

The new terminal and associated works are all scheduled for completion by September, with the building open for business in October. Coupled with the direct train services to Stratford, the new terminal will enable London Southend to offer itself as an alternative gateway for next year’s London Olympics.

Situated on the eastern perimeter of the airfield and conveniently close to the new rail station and car park, the terminal building will offer 4,000m² of floorspace, spread over two levels.

Main contractor Buckingham started on site last September and early works on this greenfield site consisted primarily of the installation of piled foundations. The steel frame was then erected by steelwork subcontractor Barrett Steel Buildings.

“This section of the steelwork has to wait until the southern elevation has been clad,” explains Dave Starmer, Buckingham Project Manager. “Although it’s only a single storey structure, the cladding team would find it difficult working around and over the erected steel.”

A steel framed terminal offers a number of advantages and the material was always the choice of the design team. As the structural design consists of a large open plan structure incorporating long spans and topped with a curved roof, steel was the choice for economics and speed of construction.

“Using steel has also given the design flexibility for future expansion,” says Steve Chambers, Design Project Manager for Stobart Developments. “Phase two of our programme could see an extension added to the northern end of the terminal, effectively doubling its overall size. The steel frame has been designed for this eventuality.”

To easily facilitate the expansion of the terminal building, the northern elevation of the main frame has been designed so that one grid line of gable posts can be removed without disturbing the overall structural stability.A new steel frame can then be seamlessly bolted onto the existing frame to form the extension.

The main frame includes a series of 14m-long Westok cellular beams spanning over two open concourse areas as well as a centrally positioned mezzanine floor which runs down the central spine of the terminal from north to south.

Erected individually, there are three Westok beams in every full span of the terminal building’s roof. These roof beams are all pre-cambered to form the 60m radius curved roof which reaches a height of 10m at its apex. 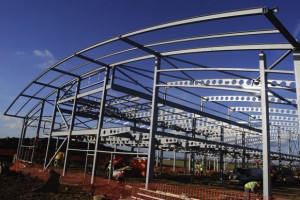 Perimeter and internal columns are all set at 6m centres, with the outer columns which support the eaves, reaching a height of 6m and the columns forming the mezzanine and central portion of the roof reaching a full height of 10m.

“Because of the regular grid pattern and the fact that no steel section is longer than 14m, we were able to erect the main frame with just one mobile crane,” says Barrett Steel Buildings Associate Director (Design) Chris Heptonstall.

Stability for the main frame is provided by bracing located in the gables, as well as feature rod bracing positioned along both of the main façades. As these two main elevations are to be fully glazed, the bracing will remain exposed and so architecturally pleasing 20mm diameter crossed rods were chosen for their aesthetic appeal.

As well as a brief return visit to erect the baggage hall, Barrett will also return to erect the two feature canopies once the main elevations have been glazed. The canopies are basically extensions of the curved roof and protrude outwards by a further 6m.

Buckingham says the project is on schedule for its late summer completion, and even though the team has been working within a ‘live’ airfield environment, no problems have arisen.

“We are continually liaising with the Civil Aviation Authority, to iron out any potential problems,” says Mr Starmer. “We have a security fence around our site which affectively seals us off from the airfield. Once we begin working on the taxiways this fence will be extended into the airfield, again isolating our work from the ‘live’ environment.”

London Southend Airport probably will not reclaim its top three UK airports spot, but a new prosperous era is on the horizon and it could be serving two million passengers by 2020, with its new steel framed terminal building at the forefront of this new era. 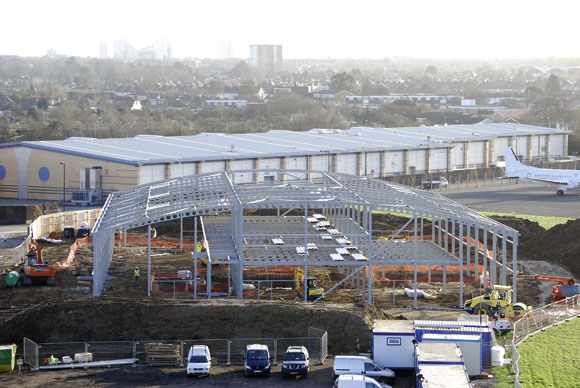