Terminal extension due for arrival 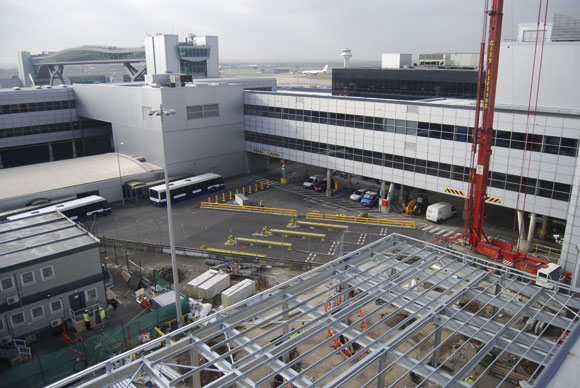 Main client: Gatwick Airport
Architect: Capita Architecture
Main contractor: Morgan Sindall
Structural engineer: WSP
Steelwork contractor: Fisher Engineering/Watson Steel Structures
Steel tonnage: 2,600t
Total Project value:£83.4M
More and more people are taking to the skies each year. Whether it is for business or pleasure and no matter what the current economic climate may be, passenger numbers at most UK airports are increasing on an annual basis.To cope with these extra passengers construction of new facilities are being undertaken at a number of airports around the country, including Gatwick, where a raft of on-going developments will enlarge and transform the North Terminal.

Extra capacity and more space are key elements in Gatwick Airport’s wide-ranging redevelopment plans, and the North Terminal is being extended along its southern and eastern elevations to create additional check-in capacity and baggage areas.

Forming part of Gatwick Airport’s North Terminal Landside Development Programme, the extension, which is due to be completed by the end of the year, will allow the terminal to increase its annual capacity from 14M to approximately 24M passengers per annum.

The project began in March 2008 when structural engineer WSP initiated the design process. On site, construction kicked off last year and working within an extremely busy ‘live’ airport has meant a number of challenges have had to be overcome.

Planning and logistics play an integral role on all large construction projects, but working on large international airports requires a little more pre-planning than normal. As the extension adjoins the existing terminal building, there is little room for materials to be stored, and consequently most are delivered on a ‘just-in-time’ basis. 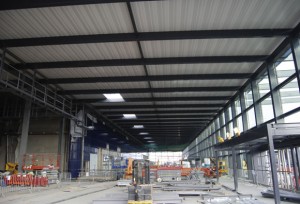 This includes the delivery of steelwork to site, all 2,600t of it has been delivered and erected by Fisher Engineering on a tight programme which was completed during March.

As the original terminal building is a steel framed structure, connecting the new steel braced extension has required a myriad of steel to steel connections.

Some of these connections have required the contractor to stiffen up existing steelwork so it could accept the extra loads from the new steelwork. As the existing steelwork is obviously connected to and inside the functioning North Terminal building this work has been undertaken during the night.

“Before we could install some trusses for the extension much of the adjoining and supporting steelwork of the old terminal building had to have 150mm thick cleats attached so it could carry the new steelwork,” explains Fisher Engineering Project Manager Robin Hamill. “Welding these plates into position had to be done from 10pm to 4am to avoid disruption to the airport.”

The new extension is L-shaped in plan, with the shorter part of the ‘L’ wrapped around the southern elevation and the eastern portion being a long structure adjoining the terminal’s eastern main facade. Attaching a new portion of structure to the southern corner of the terminal threw up some interesting challenges almost immediately.

“One line of columns is supported on steel cantilevering ground beams,” explains WSP Associate Director Ben Karunasekera. “Steel beams offered two advantages: first they were only 700mm deep, which gave us ample clearance of underground services and secondly, erecting the columns was subsequently easier with a steel to steel bolted connection.” 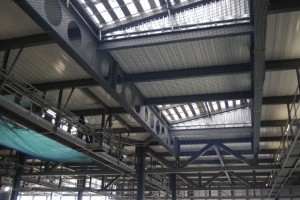 Existing foundations and services were not the only obstructions that had to be avoided during the construction process. There is a vehicular service tunnel running beneath the footprint of the southern extension, and this required careful positioning of columns in order to maintain the desired grid pattern.

Complicating the matter even more, passengers arriving at the North Terminal are also walking right across the southern extension’s footprint, albeit inside a temporary enclosed passageway.

Steelwork erection was carried out over and above this protected passageway, with cherrypickers positioned either side of this structural barrier. A new suspended walkway, which ties into the extension’s columns and is hung from the roof of the middle level, will eventually replace this temporary passageway.

The southern portion of the extension features three levels: ground floor (Level 0) for arrivals; first floor (Level 10) avenue level which will have shops and restaurants (this level connects into the revamped inter-terminal shuttle station), and second floor (Level 20) departures.

The upper floor (departures) is more open plan than the two floors beneath. In order to create this spacious floor plan two lines of internal columns are missing at this level and two 30m-long Westok cellular beams span this larger void. Cellular beams were chosen for their economic performance, and importantly at one end of the structure services do pass through the web openings.

The cellular beams were brought to site in 15m long sections, before being erected as one bolted up 30m long beam.

“As well as being economical the cellular beams were chosen as they are only supporting the roof of Level 20, which in turn is a relatively light structure as there is no plant area in this location, compared to other rooftop areas,” adds Mr Karunasekera.

Also within this section of rooftop steelwork there are maintenance walkways accommodated within two 2.1m deep trusses which span east to west (opposite to the cellular beams) across the roof of Level 20.

Creating a similar column free space in the opposite grid direction from the cellular beams, the trusses were fabricated at Fisher’s facility as complete sections ready to be erected on site. “The longest truss is a 21m-long section, weighing 16t,” explains Mr Hamill. 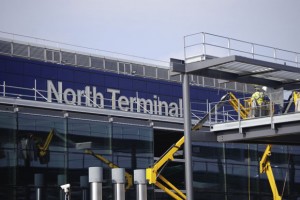 The eastern portion of the extension will bring the terminal building out and over the existing raised ramp; a structure which was previously the main access route to the terminal’s entrance. This ramp is now closed for security reasons – vehicles must now remain 30m away from the terminal building – and the main access into the revamped North Terminal will be via the shuttle station, which is situated between the Sofitel Hotel and the Short Stay Car Park.

This sector of the extension comprises of one single level which is 20m wide and approximately 100m-long. One external row of columns is spaced at 20m intervals and a series of box sections then connects to the steel frame of the existing terminal structure.

Fabricated box sections form this braced steel frame and they were erected to span this part of the project because to their aesthetic appeal, compared to traditional rafters. Because of the length of this part of the extension, each 20m span contains a movement joint connecting back into the existing steelwork.

Each box section was fully fabricated at Fisher’s facility and brought to site in the required 20m-long pieces. For this part of the project, night time welding was again required, as stud connections had to be installed onto the existing steelwork so it could accept the box sections.

The long east extension structure will be fully glazed with blast resistant laminated glass panels, fully compliant with current security regulations. In order to accommodate this glazing, all of the steel connections are hidden for an architectural finish, while the steelwork was fabricated and erected to an extremely high tolerance.

The North Terminal extension is due to be completed by the end of the year and, together with the Airport’s other projects (see box on previous page), it will provide the necessary extra space and capacity Gatwick needs for its future plans.

Gatwick moves with the times

As well as the extensions being added to the North Terminal, other developments are also on site or already complete at the South Terminal and on the Airfield, as part of Gatwick’s £1bn investment programme. At the North Terminal, connecting into its extension is an inter-terminal shuttle service which now has a new steel-framed interchange (see NSC April 2010). This was completed last year and associated works include a new short stay car park, a reconfigured forecourt and a new baggage handling system.