This Advisory Desk note highlights the key changes to BS 5950-3.1:1990 as a result of Amendment no 1, issued in January 2010. Amendment 1 reflects the findings of extensive experimental studies on the performance of  “through-deck welded” headed shear studs in composite beams. The studies included beam tests and small scale push tests carried out by SCI. As a result of this work, guidance on the design resistance and ductility of headed shear studs given in BS 5950-3.1:1990 was revised. 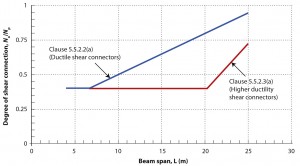 The evidence from beam tests showed that headed shear studs were more ductile than shown by small scale push tests. This greater than expected ductility allowed the use of  ‘more relaxed’ rules for the degree of shear connection requirements. Based on the results of numerical modelling, revised rules for higher ductility shear connectors in unpropped construction are given in Clause 5.5.2.3.

Due to the limited number of parameters tested, Clause 5.5.2.3 may only be used for unpropped construction, where the limits given in 5.4.7.1 (e.g. 19 mm diameter studs) are satisfied and where the ribs of the trapezoidal deck are perpendicular to the beam (secondary beams). In other cases, the rules given in Clause 5.5.2.2 may be used. A comparison between the rules given in Clause 5.5.2.2 (Ductile shear connectors) and 5.5.2.3 (Higher ductility shear connectors) is shown in Figure 1 for an unpropped symmetric beam in grade S355 steel.

The findings of the studies can also be applied when designing in accordance with BS EN 1994 1 1:2004. Two items of non-contradictory complementary information (NCCI) have been published on Steelbiz www.steelbiz.org – see documents PN001a-GB: Resistance of headed stud shear connectors in transverse sheeting and PN002a-GB: Modified limitation on partial shear connection in beams for buildings.