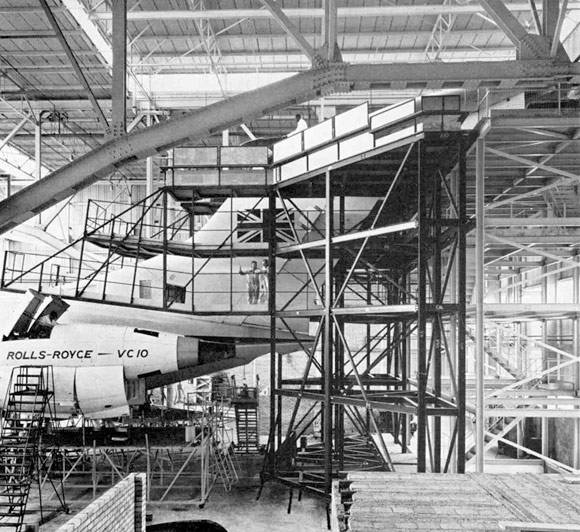 Constructed to simplify the servicing of the huge VC10 jets of the British United Airways’ fleet at Gatwick Airport, this interesting dock is in halves which move inwards so that the catwalks completely encircle the tail unit

The huge steel framed hangar built to house VC10 jets of the British United Airways’ fleet was one of the major buildings completed at Gatwick this year. It was described in Vol 3, No 5 of Building with Steel (and in this section of NSC Vol 13, No 1 forty years later). The hangar incorporates a number of interesting features including 191 ft. cantilever roof truss girders which allow for an exceptionally large unobstructed area of floor space.

A tail dock of original design has now been constructed against the rear wall of this hangar to facilitate servicing of the tail plane, elevators, fin, rudder and port and starboard engines of an aircraft, all of which are a considerable height above floor level. The design of the dock is such that all of these vital parts can be inspected and serviced at the same time.

Composition of the dock 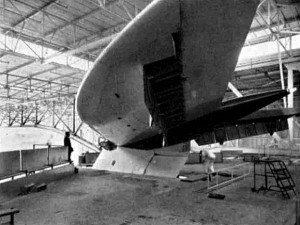 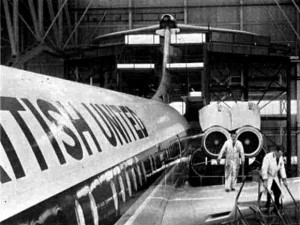 The dock comprises three structures, a central fixed unit and retractable port and starboard units. Integral with each retractable unit are two cantilevered catwalks which encircle half the rear end of the aircraft and completely encircle it when both units are brought together.

The fixed unit is mostly constructed from 6 in. by 6 in. stanchions and 7 in. by 4 in. beams, braced with rectangular hollow sections (RHS) of various sizes: these were fabricated throughout as single items for site bolted connections. The framework of retractable units is of similar dimensions: the catwalks are fabricated from RHS sections delivered as a fully-welded unit complete with guard rails and ready for bolting to the main frame. A feature of the cantilevers is the provision of hinged flaps in the floor at each level which allow the rudder operation to be checked while the whole tail plane is fully enclosed by the dock. Each of the three units is designed to carry loads of up to 80 lb./sq. ft.

Some idea of the size of the dock may be gained from the fact that the fixed unit weighs 14 tons and has a base area of 50 ft. long by 15 ft. wide and is 35 ft. high: it has four flights of steps. The first two flights terminate at a landing at the 18 ft. catwalk level: the third flight is from the 18 ft. level to the 25 ft. catwalk level. The function of these two platforms is to provide direct access to the two cantilever catwalks on the retractable units. The fourth flight of stairs leads to the 35ft. level giving access to the top platform of the reatractable units.

Each retractable unit weighs 8 tons and on the base frame there is a series of rigid castors allowing movement of the units along metal tracks laid flush with the floor. Each unit is capable of up to 11 ft. sideways movement by hand-operated 2 in. diameter lead-screws, accurate alignment parallel to the front of the fixed unit being ensured.

For servicing purposes the aircraft enters the hangar tail first and is brought up to the fixed unit. Then, in a matter of minutes, the retaractable units are moved in from the sidesuntil the two sets of catwalks completely encircle the rear of the machine.

This tail dock was prodced as the result of a combined effort by British United Airways’ engineers and the design staff of the steelwork fabricators.