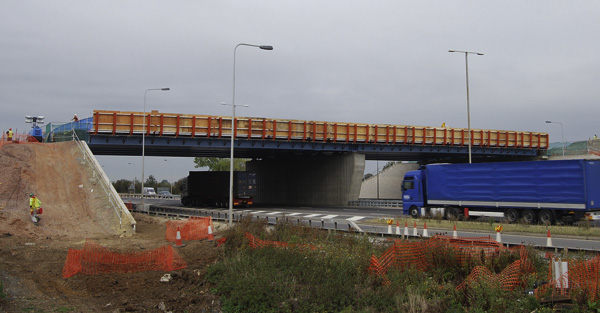 Because of increased traffic volumes the existing A421 between the M1 and Bedford’s southern bypass is being upgraded with the construction of a completely new dual carriageway, which will run slightly north of the old single carriageway highway.

The new highway will be 13km long and includes a number of bridges, eight of which are to be built with steel. The smallest structure is a warrren truss footbridge to be erected by Nusteel Structures, while the other seven road bridges are being fabricated and erected by Mabey Bridge (formerly Fairfield Mabey).

As of the end of October Mabey Bridge had erected four bridges, including the largest structure on the project, the Brogborough Bridge, which crosses the M1 motorway.

Erecting the Brogborough Bridge (pictured) required a series of partial night time closures of the M1. The bridge is 62.5m long and consists of four braced pairs of girders spaced at 3.5m centres.

The braced girders were brought to site in halves and then bolted together once erected with a splice close to the central pier.

“All of the longer span structures on the project are being built with steel,” said Roy Brunsden, Project Manager for the Highways Agency. “Steel can be brought to site in large sections which means a quick and safe erection process.”