20 Years Ago: Steelwork for people on the move 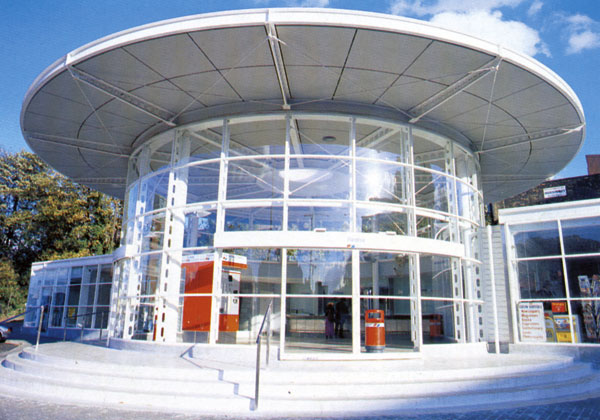 Britain’s economic future depends on developing more efficient ways of moving people and freight between our town and cities. Steel will pay a major role in modernising our transport infrastructure. The cumulative benefits of modest improvements, like new railway stations and safer road junctions will be as important as more spectacular schemes such as new river crossings and high-speed rail links.

Steel and glass were combined to make an impressive new station building for British Rail at Redhill, Surrey. The central feature is a distinctive drum-shaped booking hall, the steelwork for which was fabricated and erected by Nusteel Structures Ltd.

Staff offices and facilities are accommodated in a single storey structure built on a framework of Universal beams. This part of the building is approximately 3m high, 27m long and 10m deep and aligned with the embankment on which the railway runs through Redhill. 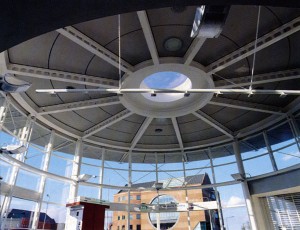 The booking hall, 10m diameter and 5m high, is recessed into the front of the singles storey structure and supported by four CHS (circular hollow section) main columns, 244mm in diameter, and eight secondary columns fabricated from 60mm dia, CHS members. The main columns are braced with 114mm dia. CHS members which encircle the building at a height of 3m above floor level.

A double ring beam assembled from 24 I-section rolled steel beams, 254mm deep, is mounted on the heads of the main and secondary columns.

The building’s roof frame is formed from six segmental units, each consisting of two perforated and tapered radial Universal beams and a rolled steel channel kerb beam. The units are cantilevered across the main and secondary columns and ring beam and project 3m beyond the perimeter of the building, providing the superstructure with a braced canopy which shelters passengers as they enter and leave the station.

At the centre of the roof the radial beams are welded to a 3m diameter hub, fabricated from rolled steel channels and Universal beams. Daylight is admitted into the booking hall through a domed rooflight above the hub.