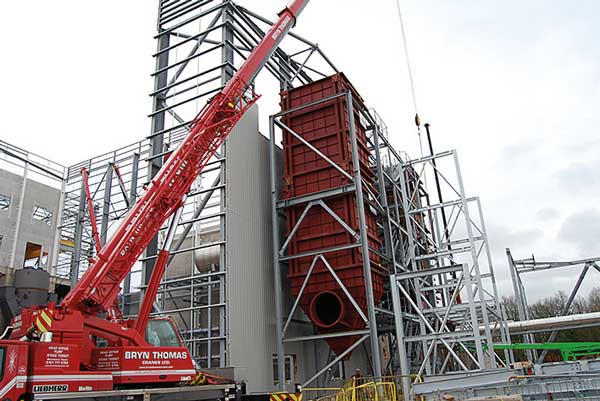 A new steel-framed waste-to-energy facility, which will help the nation reduce its reliance on landfill sites for refuse disposal, is under construction in Cheshire.

The Hooton Bio Power Resource Recovery Centre is being built by Danish-based Burmeister & Wain Scandinavian Contractor (BWSC), with Caunton Engineering erecting the steelwork for the main structures, which consist of a boiler house, turbine hall, and a fuel unloading and handling building.

“It is a very tight site and the structures are all adjacent to each other on a relatively small footprint,” Caunton Engineering Site Manager Robert Aitman said. “Site and erection logistics are playing a key role on this job as we have to work around the other trades, most notably the equipment installers.”

During the steel erection process Caunton is leaving large openings in the roofs and elevations to allow BWSC’s sub-contractors to install the plant’s large boiler and processing equipment.

Once the majority of this equipment has been installed, Caunton will infill the remaining steelwork areas, with the entire steel package due for completion in May.

The project is said to be the first non-subsidised merchant gasification plant in the UK, as well as being the first time the UK market will realise a gasification centre of this size, based on fluidised bed technology provided by Japan’s Kobelco.