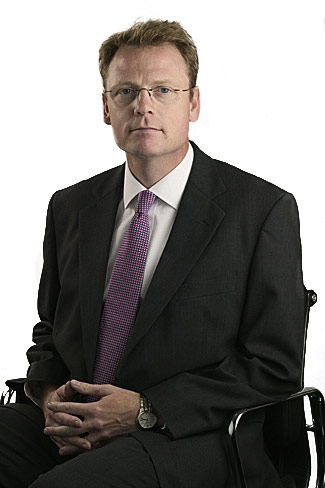 Many of the biggest projects in the busy City of London property development scene are overseen by one of the smallest client in-house construction teams in the market – only three people strong – including Richard Elliott, Head of Construction for British Land. Nick Barrett reports.

Backed up by a strategy of outsourcing most services, the British Land construction team manages a current works programme of some £850M, making it one of the biggest active developers in the country. The FTSE 100 listed British Land as the second biggest property company in the UK, with a £14,600M property portfolio of which 57% is in retail and 37% offices of which 95% is in central London, the rest being residential and industrial. British Land is currently one of the most active developers, with two major City buildings on site and a number of others in the pipeline.

It is striking how much of British Land’s current and recent development portfolio is steel framed. Steel framed projects on site now include the Willis Building, a 29 storey tower, in the City that featured in NSC in March 2006, and a two building scheme comprising the 35 storey Broadgate Tower and 12 storey 201 Bishopgate, both designed by Chicago based Skidmore, Owings & Merrill. Both of the towers have started on site and they will be joined by another big steel framed development, Ludgate West, in June this year.

There is no company policy about using steel and other materials will be considered where appropriate, says Richard. “But some projects just demand steel. There are some types of project that you couldn’t do in anything other than steel. On our Broadgate Tower building we have a five storey high steel “A“ frame that spans four railway lines  below. It is hard to imagine that in concrete.

“From an economic point of view steel usually wins out when compared to alternatives, after taking into account all factors including the costs of foundations. We like the predictability of the lead time that steel offers. Steel is also flexible and our architects value the greater freedom to express themselves that steel can give them.“

Richard and his team oversee these projects, and much more, from within a soon to be vacated warren of offices facing London’s Regents Park. If Richard’s office ever featured on the television programme Through the Keyhole the panel would quickly pin down his likely occupation from the construction paraphernalia like models of construction plant, and project photographs on the walls. That he has a liking for steel can be seen from the calendar of a well known steelwork contractor on the wall. 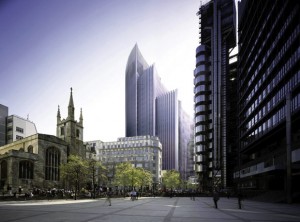 Project management rather than property development was Richard’s original chosen career path, which took him from a degree in Construction Economics at Trent Polytechnic to Mowlem, as a deputy project manager, in 1986. After two years working on London docklands projects he made his first move into the development world, joining Rosehaugh where he stayed for four years.

After a year off, working for Hong Kong Land followed, including a spell in Vietnam where he managed two projects from offices in Hanoi with joint venture partners. Back in Hong Kong after a few years he worked on infrastructure schemes including container ports and CHP plants.

Returning to the UK in late 2000 he went to work for property development managers M3 Consulting before joining British Land in May 2004, taking on the role of Project Director on the City’s Plantation Place development. “I decided I wasn’t cut out for a consultancy role and when I was offered the job by British Land I was attracted by the prospect of managing the delivery of a diverse portfolio of development activity.

“I am still in essence a project manager. We use construction management a lot and we have back up from my old employers M3. We focus on managing the construction risk. I visit all our sites almost every week, touring the site and attending design and site meetings.”

A major part of the task is to ensure that the design brief is met. ‘We get very involved in procurement and we contract directly with specialists when we use construction management, which we use for the majority of our major projects.’

It is not unusual for us to negotiate significant packages of work. “We work very closely with our specialist contractors including steelwork contractors, especially William Hare, to make sure everybody knows what is coming. On Leadenhall for example there will be sections weighing 25t, so we are talking very early in the process about how we are going to do that.”

What qualities are valued in a steelwork contractor? “We like to see up-front design input, an ability to produce details and be innovative in detailing. The quality of the manufacturing facility is also important. We need our contractors and other suppliers to be straightforward with us, and tell us their problems so we can work together to find solutions rather than wait until it is too late.”

The construction industry is becoming more sophisticated in delivering services to clients, Richard says, although there is still a lot to be done. ‘The steelwork sector has reacted to client demands for improvements in the way we would like them to. William Hare for example has been willing to look at new ways of doing things and improving their service to us. 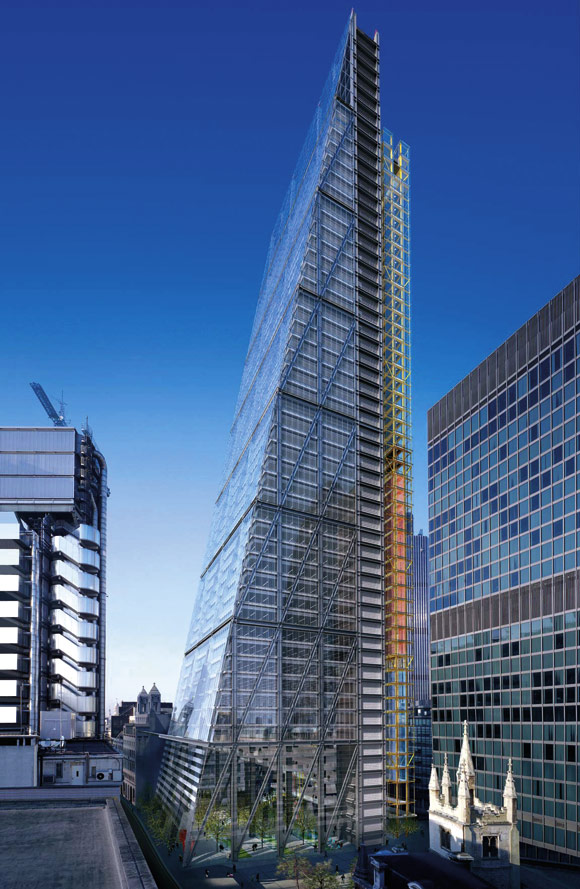 London’s skyline will be changed dramatically with the 48 storey Leadenhall building that will rise to a height of 736 ft, providing 55,870m² of high quality office space.

The unusually tapered building comprises a number of distinct structural elements. It will be stabilised by an external mega- frame consisting of a seven storey closed tube steel bracing.

Each floor plate will be connected to the mega frame and will diminish in size by 750mm at every level towards the apex. The tapering design is to ensure conservation of one of London’s world famous ‘views of importance’, of St Paul’s Cathedral.

The first seven storeys at the base of the building provide a large public space, made possible due to the seven storey bracing frame which will support the building above the galleria. This will be a unique space for a City development and will include a range of retail and amenity areas.

Structural Engineer Arup is currently carrying out detailed and extensive wind tunnel tests. The detailed scheme design is being refined and is expected to be completed later this year, with construction of the tower expected to begin in 2007. 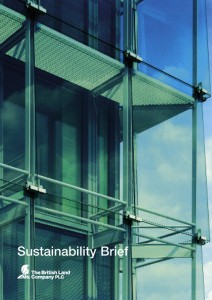 During his year off Richard went to Nepal as a volunteer helping to build water supply pipelines under the auspices of the Ghurkha Welfare Trust. A property developer with a social conscience? That fits well with the image British Land and other major property developers are keen to promote. The company’s Sustainability Brief is a model of current best practice, that forces contractors and other suppliers on its projects to jump through the sustainability hoops if they want to work for British Land.

The success of major developments is increasingly being measured in life cycle costs, which brings sustainability issues to the fore. Tenants and funding institutions are consistently asking developers for evidence of sustainability credentials of their schemes.

The challenge is to build sustainable buildings that are commercially viable, offer long-term profitability and build British Land’s reputation and relationships with the communities they operate in.  British Land aims to improve the environmental and social performance of the supply chain, by using more sustainable resources and materials and developing criteria against which to review supply chain members.

The British Land Sustainability Brief has been devised to help project teams realise these objectives. The Brief, launched in November 2004, is now used on all British Land developments.

Richard explains: “The Brief is a methodology that embeds sustainability into every development project from inception through construction and into occupation. It contains key design and construction parameters, notes on good practice, areas that require discussion and agreement and indication of where additional reference information can be sourced.”

It aims to guide the design and construction process by creating objectives and targets to achieve continuous improvement. It aims to raise awareness of staff, joint venture partners and suppliers. It also aims to define the process, standards, guidance and responsibilities of management at each stage of a project. The Brief is used in conjunction with other British Land documents like the Office Design Brief, Waste Management Plan and Corporate Responsibility Handbook.

“It is vital to use the Brief from the outset as you can’t inject sustainability into a project at a later stage,” says Richard. “Recycling, climate control impacts, appropriate materials and energy conservation all need to be addressed early on.”

Steel scores high on sustainability measures. Among the benefits noted by British Land are that off-site fabrication contributes to safer working environments and development of local skill bases; off-site modular construction and prefabrication increase productivity and reduce waste; waste and transportation are reduced, lessening the impact on the local environment near the construction site; future modification and adaptation are relatively easy, which helps extend the working life of structures; some 94% of construction steel can be recovered, with 84% recycled.

Paybacks have already been seen. A sustainability review on the Broadgate Tower and Leadenhall schemes included the quality of relationships with potential tenants, suppliers and opinion formers as well as local communities and authorities. “Our approach to environmental issues and the local community helped secure first time planning consents for two significant multi-storey schemes.” 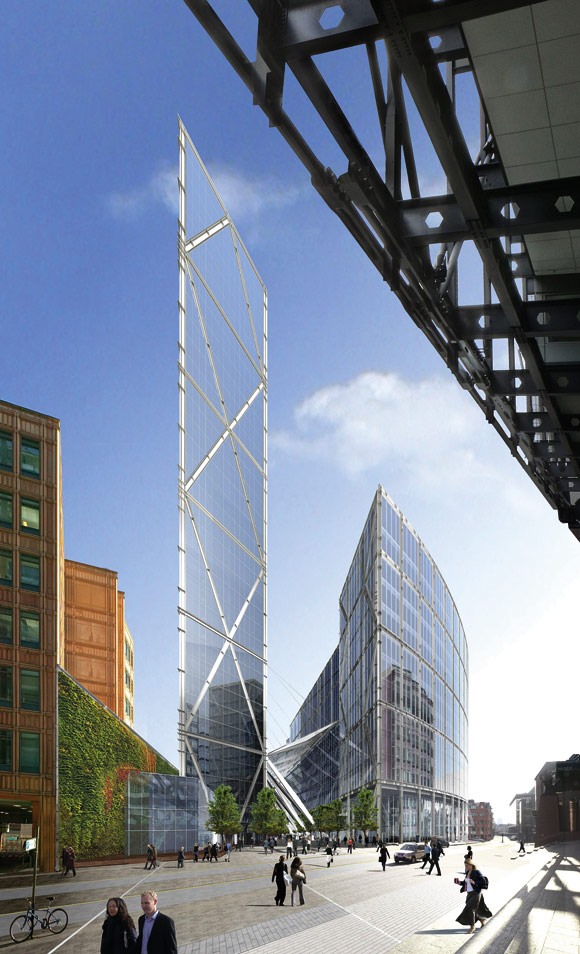 Contractor Bovis Lend Lease began construction on the Broadgate Tower and 201 Bishopsgate in London in October 2005. The buildings together will create 820,000 sq ft of office space, using 14,000t of steelwork.

The development is being constructed on a flat slab raft built over a mainline railway in 2000, creating a tunnel which will run underneath the buildings. The 35 storey tower and adjoining 12 storey building are situated on a 2.3 acre site and will be linked together with a large steel and glass canopy suspended from the tower by steel cables. The canopy cantilevers out and upwards from the structure at the fifth floor. The canopy will provide a new public space and galleria containing a number of shops, bars and cafes.

Chicago based Skidmore Owings & Merrill is both the architect and the structural engineer. The tower will have a steel tube frame, with the perimeter steelwork forming the main structural support as there is no central core. It is externally braced with expressed steelwork.

At the fifth floor the tower frame converts to a steel A-frame to distribute the load over the raft and onto the foundations on one side and in the centre of the railway. The lower rise building will have an internal bracing with cell beam floor framing. Construction of the superstructures will begin in early summer and is programmed to be completed in Spring 2008, creating a grand entrance to the Broadgate Estate.