Steel chips in for barn design

Steel goes up on the previously completed slab

With a capacity of 12,000t of boxed potatoes, steel construction has helped create one of the largest potato stores in the UK.

Not only does the store have a huge capacity, it has also helped rationalise the company’s storage procedure for its annual crop of potatoes

“Previously our crop had to be distributed to various stores within a 40 mile radius. The shed was designed in a way to maximise storage until the May/June markets when we generally sell the majority of the crop,” explains P.J Lee & Sons Partner Christopher Lee.

“From cladding choice to lights and ventilation systems, the project demanded high quality components to create one of the largest potato storage facilities in the UK. It is our ‘flagship’ store and we hope to have the opportunity to build another of similar size on-site in the next few years.”

Built on the site of a former machinery storage area, the state-of-the-art building was delivered on time and on budget by a team of dedicated contractors under the supervision of Jeremy Nunn of Thurlow Nunn Standen, with A C Bacon Engineering providing the steel frame, insulated cladding and access doors.

Insulation and ventilation is key to maintaining cool temperatures needed during crop storage through to the month of June, retaining high quality in the hope of achieving a premium price per tonne.

Overall the store measures 58m wide by 97m long. It consists of three spans, one central portal frame with two propped portals either side.

Two propped portals either side of a conventional portal frame

“Steel construction was the only solution for this project in order to get the required large open areas,” explains Frith Blake Partner Jon Frith.

The building can be segregated into various storage areas, each with the ability to maintain their own climate requirements.

The central 35m wide span is one large open area used as the company’s potato grading area. Either side of the span, the two outer portals, both measuring 31m wide, are each divided into three separate storage areas.

The building was constructed to enable the grading area to be converted into a storage area for a further 2,040 boxes after sorting has been completed. 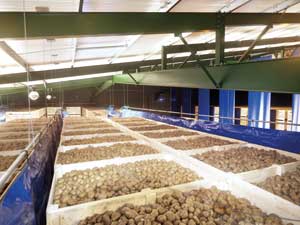 Many of the potatoes are sold to crisp manufacturers

Boxes at the front of the grading/additional storage area can be removed, within an afternoon, allowing a grader to be set up.

A set of 24m wide ‘hangar’ doors provide safe, efficient, unhindered access to the central hub from which all of the eight storage areas can be serviced.

The introduction of a 250kW solar photovoltaic system on the roof contributes not only to the running of the store but also the whole site during peak production.

The photovoltaic system also played an important part in the overall design of the steel frame.

“It’s a bespoke steel frame because in order to have a large expanse of south facing roof onto which the solar panels could be fitted, we twisted the layout around so that the three spans run across the width of the structure instead of the usual length-wise format used in similar sheds,” said Thurlow Nunn Standen Partner Jeremy Nunn.

For the construction programme, the initial stage involved the installation of 998mm diameter × 11.5m-deep concrete piles, arranged around a tight 2.5m grid pattern because of the Fens’ extremely soft ground. 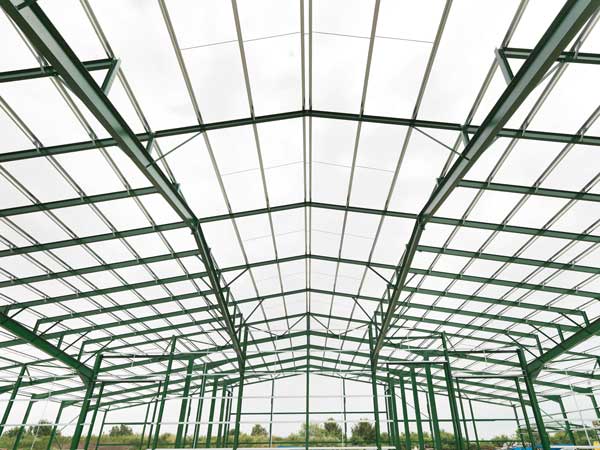 The concrete slab was then installed and this gave the steel erectors a flat and hard surface for their MEWPs. 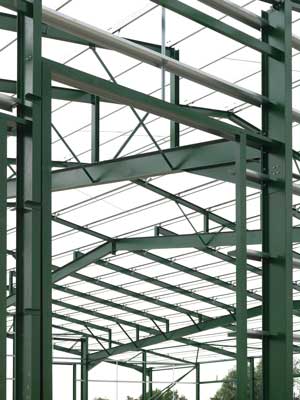 Using two mobile cranes, the steel frame was erected during a six week programme with the main central span installed first. All of the columns are spaced at 6m centres and the tallest of these members are 8m-high sections located in the middle of the building.

Roof rafters were brought to site in two sections (each 15.5m for the outer spans and 17m sections for the mid-span), bolted together on the ground and then lifted into place as one member.

Once the main frame was erected A C Bacon Engineering then retrofitted a further 20t of internal steelwork to support the store’s fans and chillers.

“This was a successful project with a unique steel frame at the heart of it,” sums up Mr Nunn. “There were a few challenges to overcome, such as noise levels and being mindful of neighboring properties, but we completed the project on time and to the client’s satisfaction.” 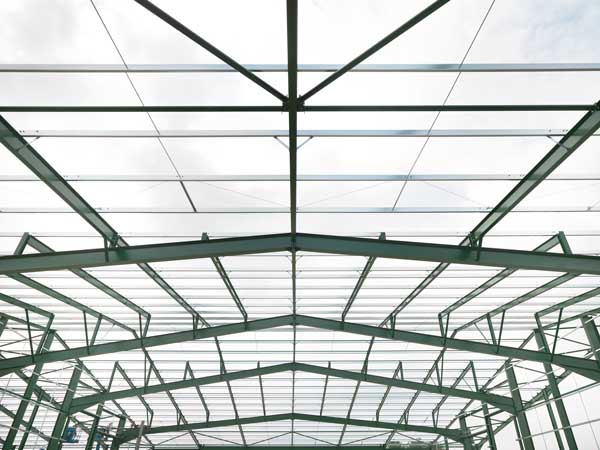 With this arrangement of steelwork, careful attention must be paid to the essential restraint to both secondary and primary rafters. The secondary rafters are restrained conventionally – the purlins are connected to the top flange and at certain locations, inner flange restraints (sometimes called “fly bracing”) are provided. These restraints to the inside flanges ensure that that compression flange is restrained when subject to wind uplift.

This admittedly complicated description of the arrangement of restraints – and the careful attention paid to these restraints in the structure itself – serves to emphasise the critical importance of inner flange restraints. In conventional portal frames, some of the inside flange of the rafter will be in compression under normal gravity loads and the situation will reverse under wind uplift. These restraints are safety critical elements in portal frames – particularly in the haunched length, where the compression force in the flange is largest with the associated tendency to buckle. The inside flange at the haunch/column junction is the most critical location of all and designers should ensure that this point is restrained adequately.