Sport and fitness in the frame 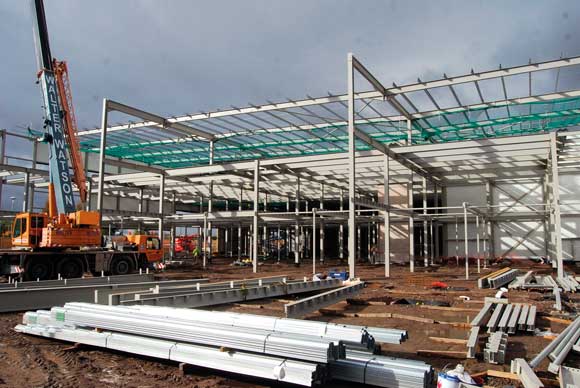 The new frame sits adjacent to the existing building

A steel-framed solution is the answer for a leading retailer’s first new build outlet in Scotland.

Designed specifically to house the company’s leading retail fascias under one roof, including Sports Direct, Flannels, USC and an Everlast Fitness Club, the new development is located close to the popular Glasgow Fort shopping centre, adjacent to the M8 motorway.

The scheme comprises the refurbishment and reconfiguration of a steel-framed former retail unit adjacent to an existing Morrisons store on Auchinlea Way, along with the construction of a three-storey steel frame extension, totalling over 16,700m² of retail space.

The project is said to be aligned with a new direction for Sports Direct in how it manages its current portfolio of stores, which includes a focus on securing freehold assets, where its portfolio of fascias can potentially be brought together in a single location.

Main contractor ISG will form distinct retail space for each of the retail fascias at the new Glasgow outlet, with the luxury men and women’s designer store Flannels, extending across the ground and first floors.

Sports Direct’s latest concept store design will be showcased in Glasgow, as will be Scotland’s very first Everlast Fitness Club, occupying the entire second floor of the extension and featuring an open plan gym area, café, dance and spinning studios.

The renovated existing steel-framed building will be subdivided and let to other retailers, as will a separate unit within the new build element.

The striking design for the new unit includes a gullwing roof structure, extensive glazing and cladding panels, including distinctive coloured mosaic feature panels to the façade. 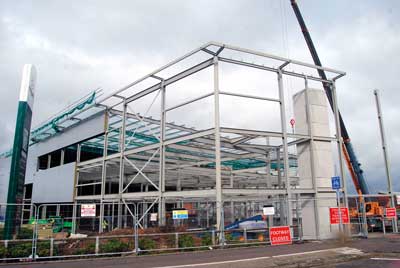 Visualisation of the completed project

“The existing building will be over-clad with the same material as the new build, so even though they are separate structures sitting end-to-end, they will appear to be one new building,” explains ISG Senior Project Manager Stephen Maclaren.

The ground has been vibro-improved and the new steel frame sits on pad foundations, similar in design to the adjacent existing structure.

There is a 600mm gap between the new frame and the existing frame and this close proximity meant that one row of column’s foundations were obstructed by old foundations.

“There was very little information available regarding the old structure and its foundation,” explains Adept Structural Engineer Andrew Spencer. “As the old foundations protruded into the zone of the new works we designed a cantilevering ground beam to avoid the obstructions and carry the columns closest to the existing building.”

The new steel frame is based around 6m-wide bays, with some slightly larger where needs, such as escalators, dictate. It is a braced frame, with cross bracings located along the perimeter walls.

“We completed our works by handing over the building in three phases, allowing other trades to follow on as each phase was finished,” says Walter Watson Project Manager Trevor Irvine.

Two different solutions have been used for the flooring, with a composite steelwork supporting metal decking and a concrete topping for the second floor, and cold-rolled steel joists supporting timber flooring for the first level.

The first floor is essentially a mezzanine level, covering roughly 85% of the frame’s footprint. Supported on slim box section columns, that are positioned at regular intervals between the main columns, they can be removed if required, adding flexibility into the scheme.

Likewise, a timber flooring system supported on cold rolled steel was chosen as it can be easily removed along with its supporting steel members.

The steel design has also taken into account that the upper second floor needs to be as column-free as possible, due to it being a large open-plan gym.

“There are only seven internal spine columns on this floor, giving the area the required open feel,” says Mr Maclaren. “Either side of the central columns two rows of 20m-long rafters form the building’s roof.”

The roof was initially designed as a portalised frame, however, after some value engineering by ISG, it was altered to a more cost-effective and eye-catching gullwing design.

Vibration could be issue for the gym’s floor especially in areas where weights may get dropped on to the deck. In these areas, the 150mm-thick slab is supported by deeper beams, 610 UBs instead of 457 UBs used elsewhere on the project, to negate any issues.

ISG completed the construction of the new outlet towards the end of last year, with the store fit-out due to commence in early 2018.

Summing up, ISG’s Retail Framework Director Richard Oldfield says: “Sports Direct represents one of the UK’s most successful retail roll outs and the company’s focus on creating a house of brands for its new store designs is a key development for the business.

“The new Glasgow outlet brings a new gym concept – Everlast Fitness Clubs to Scotland, as well as the country’s second ever Flannels store. This is a key win for our business as we add Sports Direct to our client portfolio of the most influential global retail brands.”