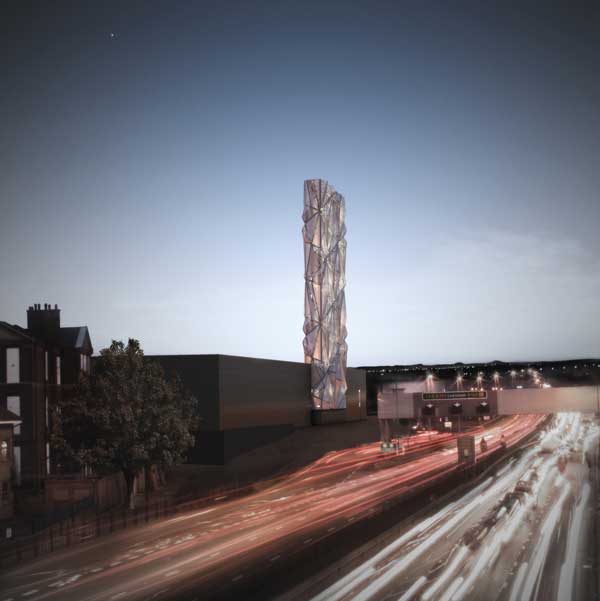 The flue stack overlooks the southern entrance of the Blackwall Tunnel

Designed in collaboration with C.F. Møller Architects, the flue is said to be the most ambitious public commission to date for renowned artist Conrad Shawcross.

Uniting sophisticated engineering and complex optical research the monumental structure – which is also 20m-wide and 3m-deep – is constructed from five interconnected steel ladder frames that will be clad with perforated aluminium panels.

These triangular panels fold across the surface of the tower forming intricate geometric patterns that visually break up the flat planes to create an uneven sculpted surface.

According to Mr Shawcross, a key aspect of the design is the creation of the Moiré Effect, which is created by overlaying the perforations on each panel at different angles to each other, resulting in a dynamic and beguiling surface which appears to change continually. 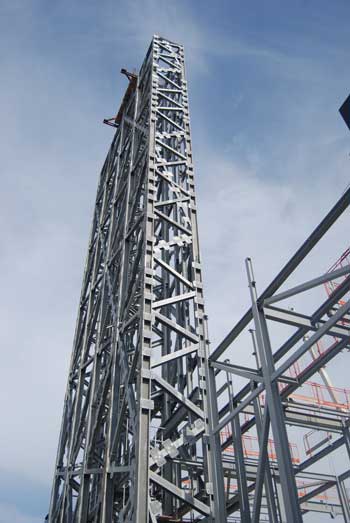 The fully galvanized flue stack erected and awaiting the cladding 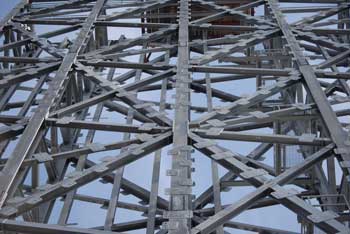 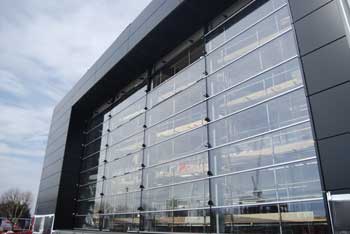 The glazed façade of the visitor centre

During the evening the tower will be lit from within, continually redefining the shape of the structure and its surroundings.

C.F. Møller Architects Associate Sam Whatman says: “The original design concept for the tower was to align the flues in a row in order to create a tower with an unusually slim profile, a fin or ‘blade’ on the skyline. This concept brought many structural challenges, not least the high wind loading on the long face of the structure.

“The tensile strength of steel coupled with its ductility made steel the obvious choice as it allowed us to create a strong but slim and highly perforated structure.”

In addition to the structural properties of the material, the industrial aesthetic of steel lent itself to the historical context of Greenwich Peninsula.

“The cross bracing inherent to the structure echoes the lattice work of the neighbouring gas holder dating from 1886. Further benefits include the ability to accurately fabricate the frame in sections off-site followed by a quick installation on site,” adds Mr Whatman.

The flue stack will act as a beacon or landmark to the huge regeneration scheme that is taking place on the North Greenwich Peninsula. This previously industrial area of south London that is now famous for the O2 Arena (formerly the Millennium Dome) will eventually accommodate more than 10,000 new homes and over 300,000m² of office space.

The flue and the connected energy centre are being built to guarantee a supply of efficient and sustainable power to the development..

The steel-framed energy building measures 90m-long by 25m-wide and 12m-high, and it will house technically advanced boilers and combined heat and power plant that will distribute heat energy to each plot across the development.

Steelwork for the project is being fabricated, supplied and erected by Billington Structures, with 345t needed for the flue stack and 130t for the frame of the energy centre building.

Both the flue stack and the energy centre building are steel braced frames, however both are structurally independent.

“Initially the design envisaged the flue tower being formed with fabricated girders but, in order to make the structure as light and as narrow as possible, regular UC sections were the final choice,” explains Price & Myers Project Engineer Amanda Constantinesco.

Although the flue is braced it still requires a series 1m-long holding down bolts for extra stability. These bolts are set within large circular base plates which guaranteed that once the ladders were up they were immediately stable without the need for any temporary bracing or propping.

“We decided the best way of fabricating, delivering and erecting the flue was to bring it to site as fully assembled ladder sections,” says the Project Manager for Billington Structures.

There are five ladders in total and each one arrived on site in three pieces, which after being lifted into place and bolted up formed one 49m-high section.

The 3m-wide ladders are spaced at 4.5m centres and are connected by a series of diagonal cross members. Large nodes on the ladders accept these cross members with some nodes accepting up to eight members.

Because the flue stack’s cladding is perforated, the steelwork will be exposed to the elements. For this reason all of the steelwork has been galvanized to guarantee a rust-resistant finish and less maintenance.

The ladder sections were galvanized after being assembled and these pieces, up to 16m-long by 3m-wide, were some of the largest elements Worksop Galvanizing had ever processed.

The length of the ladder sections was carefully planned so that they fitted the plant’s hot-dip galvanizing facilities with only millimetres to spare. The width of the sections meant that each one had to be dipped once, lifted, turned and dipped again from the other side in a very precise operation to ensure full coverage.

Billington Structure’s erection sequence saw the company erect each end of the energy centre building first. This left a central area clear to allow them to position a 200t mobile crane to erect the ladder frames. Once the flue was erected Billington then erected the final middle portion of the energy building.

The majority of the energy centre is a large braced box offering open column-free spans of 20m into which all of the boilers are being installed. At 90m-long the building has been future-proofed with plenty of room for additional boilers to be installed when the North Greenwich development expands further.

Likewise, the flue stack will initially accommodate four flues, but this can be increased to a maximum of 10 when the need arises.

Guided by a desire to demystify the process of energy generation, the machine rooms and flexible ancillary office accommodation are supplemented with a visitor centre at one end of the building that will offer an interactive educational experience for prearranged groups of visitors.

Summing up, Kier Construction Project Manager Ben Fleming concludes: “The design has required a high degree of co-ordination between the structural design team (including Billington), our cladding designers, the flue designers and the artist Conrad Shawcross.

“The flexibility of steel has been a great benefit in helping us to achieve a solution that is acceptable to all. This is a complex structure that will certainly become a future landmark for the Greenwich Peninsula.”

The Greenwich Peninsula Low Carbon Energy Centre is due to be operational by the end of this year.