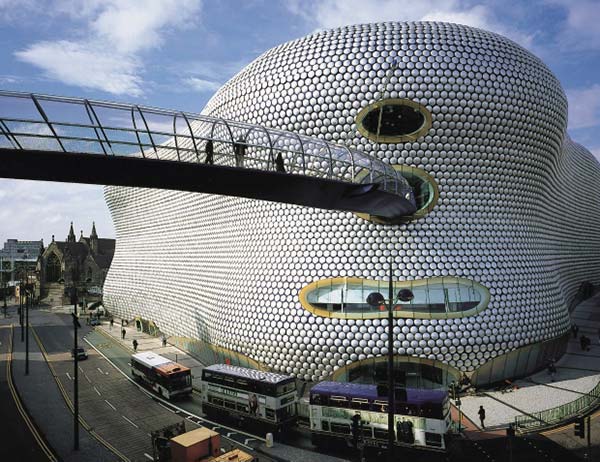 The structural frame of the Selfridges Building in Birmingham is like most other multi-storey building frames in many respects. It is designed to resist vertical and lateral loading (which in this case included reactions from the attached cable-stayed bridge) and to ensure acceptable dynamic performance and movements. However, there are two specific design criteria which differentiate this building from most conventional frames and which lead to an unusual and ambitious design. The first of these was the need to define the curved building shape and support the freeform sprayed-concrete façade system. The second was the desire to create retail floor plates with minimum vertical structure and of maximum height. To achieve these goals the design takes advantage of CAD/CAM technology and mass customisation to allow the economic fabrication of an irregular framework. It also achieves a high degree of integration with services feeding the retail floors to maximise floor-to-ceiling heights. Neither of these strategies is ground-breaking in isolation, but in combination they create a truly holistic solution, an economic synergy of architecture and building engineering which could not have been achieved with a more conventional solution. 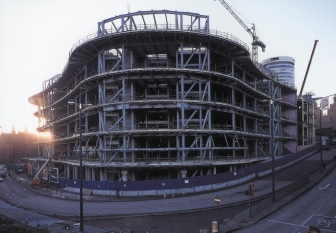 The starting point for the frame design was to derive a suitable column layout. The super-position of a standard cartesian column grid on the irregular plan shapes of the building seemed inappropriate and incompatible with the architectural layout. The chosen approach was to locate a string of columns around the building perimeter spaced approximately 12m apart and a separate necklace around the two internal atria at the same spacing. A handful of extra columns were required to limit primary and secondary beam spans to 12m and 16m respectively, the maximum spans that were considered as economically feasible. Again these additional columns were individually and strategically placed to suit both the structural and architectural requirements.

The plan shape of the building changes from floor to floor to match the curvature of the envelope in section. This requires secondary beams to cantilever from the perimeter column line by different distances around the slab edge and at each level. At the ‘waist’ of the building the columns sit tight against the inside face of the façade, whereas at the ‘hips’ and ‘shoulders’ the floor cantilevers up to 4.5m, deemed as a maximum practical limit, thus controlling the vertical curvature of the building. It was these relatively long spans and lack of regular grid resulting from this minimum column approach that drove the design towards a steel solution. 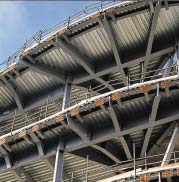 A desire for maximum floor-to-ceiling heights in retail areas led to the integration of structure and building services within the same 1500mm deep zone. This co-ordination exercise required a balance of practicality and flexibility, allowing the potential for future rearrangement and refitting of retail departments. The chosen strategy provides fixed routes for primary ductwork through standard notches at beam ends, with secondary ducts and pipe-work running through 650mm diameter holes in beam webs. These holes are not located specifically for the current services arrangement (indeed this arrangement was unknown until after the completion of the frame erection), rather they are designed to ensure that a reasonable level of variation in layout is possible. This standardisation of notch and hole sizes/spacing simplified the fabrication requirements and allowed a certain amount of repetition despite the large number of different beam lengths. The co-ordinated structure/services strategy also steered the structural design towards a deep but light beam solution with good stiffness characteristics and hence good dynamic performance. Asymmetric plate girders of a standard depth were chosen for the majority of beam sections working compositely with the 150mm deep concrete floor slab. The use of plate girders allowed greater control over the distribution of material than a solution using equivalent depth rolled sections, resulting in much lighter beams and less fabrication waste. 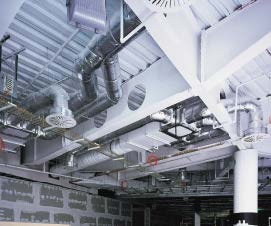 It became clear during design that the secondary floor beams made up over two-thirds of the total frame tonnage, and that small improvements in the design of these beam types would yield significant overall savings of weight and cost. The optimisation/ rationalisation process was complicated by the large number of different beam lengths and support conditions resulting in a vast matrix of different demands. The resulting designs and number of different beam types are a balance of performance and practicality.

The choice of corrosion and particularly fire protection systems also formed an important part of the frame design and the potential for exposing the floor structure and services as a ‘technical ceiling’ was recognised early in the design process. A fire engineering study was carried out which resulted in a reduction of the fire resistance requirement of floor structure from two hours to 60 minutes, thus allowing the economic use of a site-applied intumescent paint system. The result is a clean soffit appearance that has been left exposed in several areas of the current fit-out.

Traditionally the emphasis in multi-storey steel-framed construction has been on regularity and repetition to create function and economy. In recent years the possibility for accurate fabrication of highly irregular frames has been demonstrated and such frames have been constructed, typically for the sole purpose of creating unusual architectural form. The Selfridges building is proof that these desires need not be mutually exclusive. As such Selfridges should not be considered as a ‘one-off’, and this ability to marry the requirements of function, economy and form helps to unleash the potential for a new generation of steel framed buildings.

A big retail name for Birmingham’s city centre, this is an architecturally challenging and exciting building, but with a common sense approach to its structural framing strategy. The rationalisation of steel sizes in the highly irregular multi-storey frame provides a sense of balance between the required flexibility of function and the practicalities demanded for construction