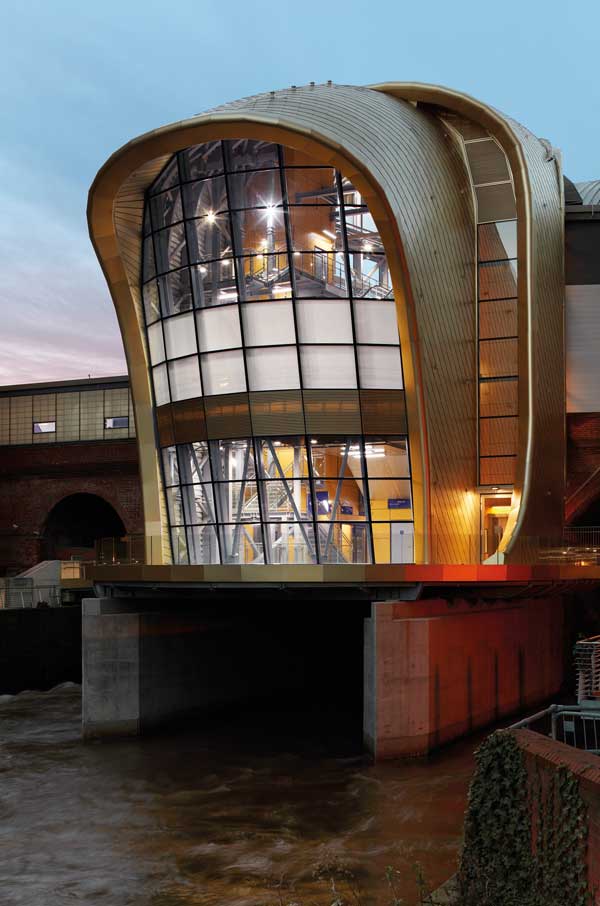 The Leeds Station Southern Entrance has relieved congestion, future-proofed ticket line gate capacity and will encourage growth in the south of the city.

“We built it over water and so we had river safety issues, while apartment blocks on two sides meant the site was very constrained and required a large 63m-high tower crane,” explains Network Rail Project Manager Luan Anderson.

“We were also working next to and at times over live rail lines so some of our work could only be done during night-time possessions.”

Prior to the erection of the steel-framed entrance superstructure, main contractor Carillion Rail had to first install piled foundations and two concrete piers in the middle of the river.

The piers, supporting a transfer deck, were positioned and aligned with the existing rail viaduct arches so as not to impede the flow of the river during heavy rain.

The steel was installed via the on-site tower crane lifting the members off barges and positioning them directly between the new piers.

The transfer deck comprises a series of galvanized beams positioned at 1.8m centres. The beams span 10.2m between the new concrete piers and cantilever a further 3.5m beyond the centre line of each pier providing support to the columns above, as well as support to an access and maintenance deck around the perimeter of the building base.

“The main reasons why a steel deck was specified were the benefits brought by offsite fabrication and speed of erection that reduced the construction time above the river, which was considered to be a positive health and safety decision,” says Mott MacDonald Project Manager Jon Svikis.

Sitting atop the transfer deck the entrance superstructure comprises a series of portalised arches at 1.8m centres.

The hoops are a maximum of 20m tall, with a horizontal span of approximately 12.5m. Each frame comprises two vertical legs and a curved arch section of varying radii of between 2.8m and 12.3m.

Generally the frames were erected in four pieces. The frames are braced out of plane via a series of SHS members, forming an inherently stable ‘diagrid type’ structure.

There are 11 frames at river deck level; with a further nine frames extending above three existing railway lines to form the connection with the high-level concourse.

The judges were impressed by the team’s planning and execution of the erection above the river and within a live station environment.