Lifeboat centre in the frame 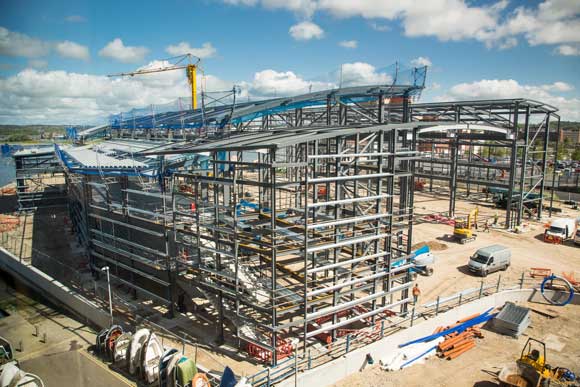 The charity has a fleet of 346 lifeboats operating out of 237 lifeboat stations and the nature of the work has meant that it has always been at the forefront of nautical design and development.

However, as the technology used on its lifeboats has advanced in recent times, the pool of suppliers able to produce them to the required exacting specifications has reduced.

The RNLI’s solution is to build a world-class centre of excellence in lifeboat engineering, production and manufacture at its headquarters in Poole. Known as the All-Weather Lifeboat Centre (ALC), the facility will bring together the production for the RNLI’s new generation of Shannon class all-weather lifeboats, as well as providing a maintenance and refit facility for its existing Tamar and Severn class fleet.

The ALC consists of two large steel-framed buildings (A and B), both approximately 85m long × 30m wide, connected by a central covered courtyard.

The two buildings are connected by a covered courtyard 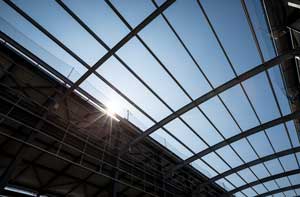 The roof canopy will allow daylight to illuminate the courtyard 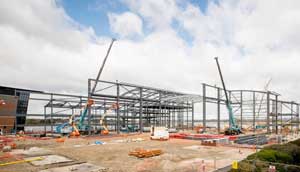 Steelwork’s speed of construction was important to this project

Long clear spans for the main areas of both buildings were an important part of the design and were the main reason behind the choice of steel as the project’s framing material.

“Spans up to 20m, the requirement for various roof curves and the need for the frame to be constructed quickly, meant that a steel framed structure was the optimum solution,” says Ramboll Structural Engineer Ben Punton.

Both buildings’ main production areas have been formed around 10m × 20m bays as this provides the necessary open column-free space. A slightly smaller 10m × 8m grid pattern is then used for adjoining mezzanine levels and first floor office areas.

The first part of the lifeboat manufacturing process will take place in building A, where composite hulls, decks and wheelhouses will be cast in large moulds. Overhead cranes will allow the hulls to be moved around the building as work progresses, while the structure’s 20m internal height makes winching the hull out of its mould for the first time a safe and controlled operation.

“The halls in both buildings have been designed around the largest class of lifeboat,” says RNLI Project Supervisor Iona Evans. “Building A can accommodate five Severn Class vessels at one time, while B can house seven.”

One end of building A accommodates spray booths, three for the boats themselves, and one smaller booth to be used for painting components. Formed and painted boats will then be transferred across to building B where the engines and wheelhouses will be installed.

Each of the buildings features a mezzanine walkway that runs along one elevation at a 3m high and will allow engineers and technicians to walk straight onto the deck level of lifeboats for maintenance work. Above the mezzanines both buildings have office space, a canteen, and toilets and showers. Building B will also have a viewing gallery and “visitor experience” suite with windows looking out over the maintenance and production hall.

Leadbitter, a Bouygues UK company, delivered the new building. Summing up the project, Bouygues UK Senior Project Manager Mike Harrington says: “This is a unique and bespoke project. The timescales for delivering the project and the budget were a challenge initially. However, we’ve worked hard to build a centre that will serve the RNLI and its staff and volunteers for many years to come.”

The ALC was handed over in late February and will be officially opened in August. 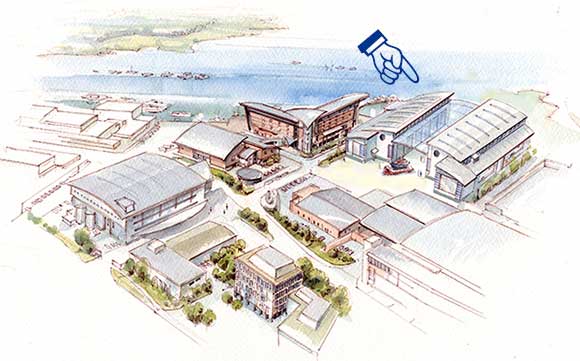 Steelwork contractor for the project was Norfolk based H. Young Structures. The company fabricated and supplied approximately 1,000t of structural steelwork for the project, with the entire package then erected in a fast-track 12-week programme.

Using Ramboll’s original design, H. Young Structures designed all of the connections as well as the secondary steelwork for the envelope support.

“Speed and quality were of the essence as far as getting the steel frame up,” explains H. Young Structures Projects Director Peter Smith. “We had two gangs erecting steel simultaneously at one stage.”

Steel erection began on building A, with a second gang commencing work on building B five weeks later. As the second building was erected the 25m-long galvanized rafters spaced at 10m intervals, which form the canopy over the central courtyard, were also installed.

Only the main rafters for the canopy were initially erected as this left large enough gaps to allow the cladding system to be installed to the building’s inside elevations. Once the main frame steelwork was up and the cladding finished, H. Young Structures completed the installation of canopy purlins on a return visit.

“This has been a prestigious project for us to be involved in,” sums up Mr Smith. “We had no access issues erecting the steelwork as we had the site pretty much to ourselves. The biggest challenges were the tight tolerances we were working to around the building’s large doorways and the internal crane beams.”