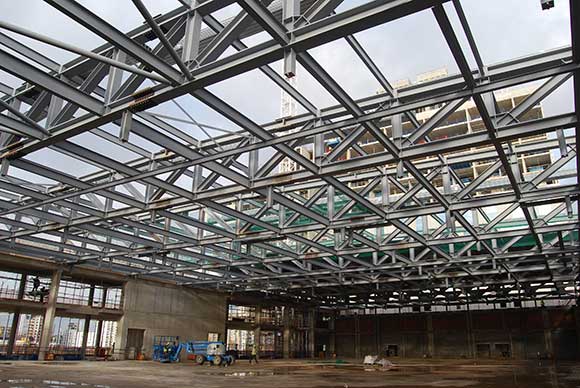 A series of steel trusses form the large open ballroom

A series of 42m-long steel trusses has been erected to form the roof of Europe’s largest pillar free ballroom at a hotel development in south London.

The scheme, which also includes a multi-storey apartment block, is the latest stage in revitalising a former industrial area of south London into a key part of the capital’s commercial landscape.

The hotel has been designed to BREEAM ‘Excellent’ sustainability standards with features such as a green roof and partaking in the local district heating scheme.

Leisure facilities will include a health spa with an indoor swimming pool, several restaurants and a panoramic sky bar. But it is the massive 3,200m² column-free space that adjoins the main hotel tower and is situated above two basement car parking levels that really stands out.

“This large space is a ballroom for up to 2,500 guests seated for dinner or a 3,000 person standing event,” explains RTKL Associate Director Mike Dooling. “The ability to have one large column-free area is a big marketing driver for the venue and the hotel targeting a number of large events. It can be subdivided into 14 individual spaces providing a highly flexible range of spaces from 200 to 3,200m². More than 250m of sliding acoustic partitions running on ceiling tracks supported by the steel structure provide the acoustic separation between these individual areas.” 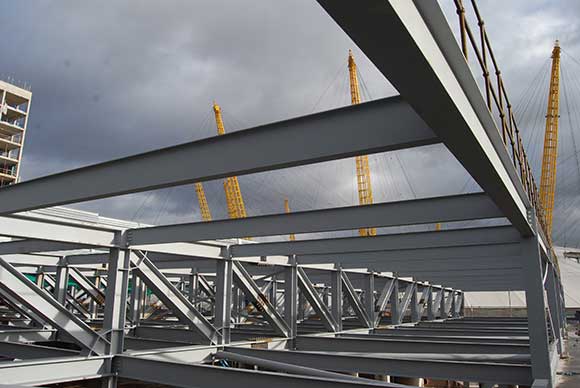 The trusses are deep enough to allow maintenance access

Designing the space required the project team to think outside of the box, in this case the reinforced concrete box that not only forms the basement car park upon which the ballroom sits, but also the surrounding walls.

The ballroom measures 40m × 80m and the only way the project team say they could economically construct a roof over this space without any internal columns was to use a series of steel trusses.

“A number of issues, as well as the long spans, led us down the steel route,” explains Fairhurst Technical Manager James Toon. “Importantly steel could be procured and erected quickly and this was important as we had to incorporate some design changes quite late in the day.”

One of the challenges revolved around  how to distribute the extra loadings that would be exerted to the structure’s steelwork after it was decided that the ballroom’s trusses would need to accommodate heavier hanging exhibition items.

Fairhurst along with the project’s steelwork contractor Apex Steel Structures designed the trusses with larger member sizes and added a series of 2t capacity lifting eyes, which are spaced at approximately 8m centres that will allow exhibits such as cars to be hung from the steelwork.

There are nine central trusses in total, spaced at 8m centres and each one is 42m-long × 2.5m high and weighs 39t. 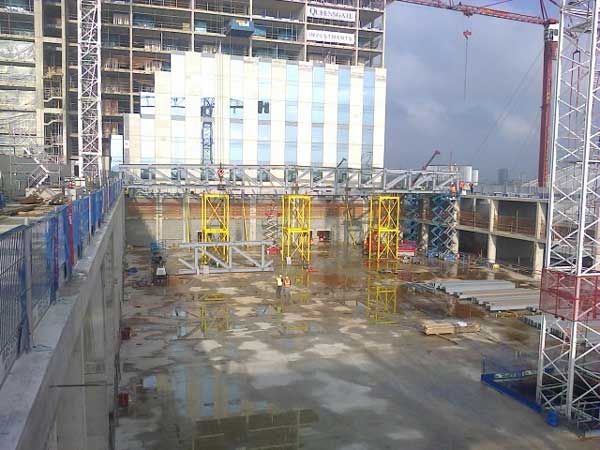 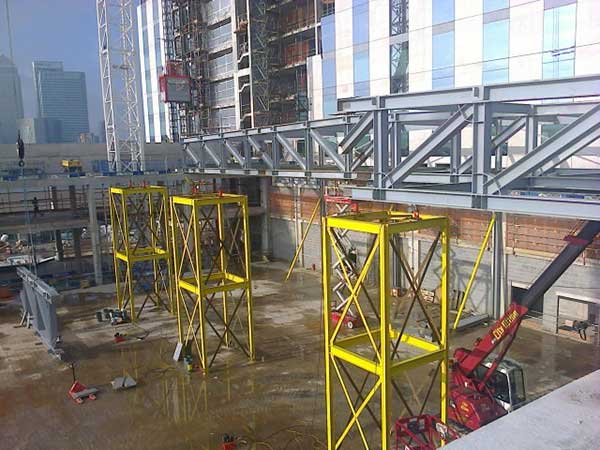 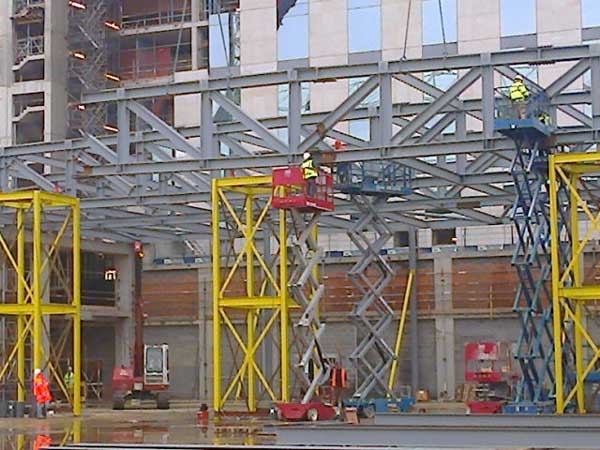 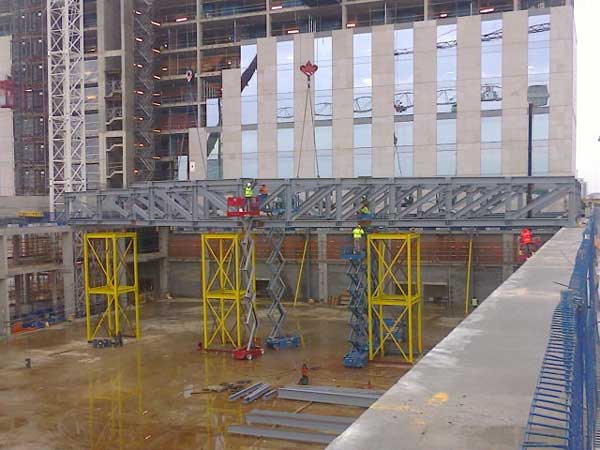 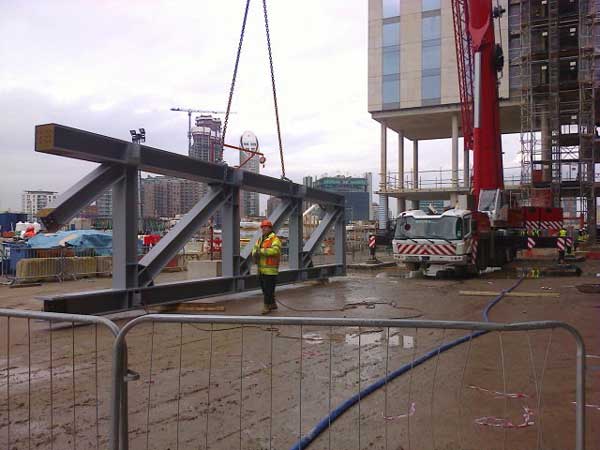 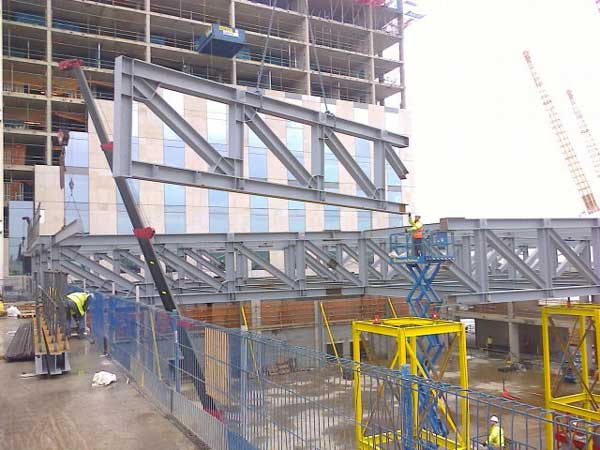 Apex fabricated each truss in four separate pieces for ease of delivery and erection.

“Before delivering the steel sections to site we trial erected each truss to make sure they could be bolted together exactly,” says Apex Steel Structures Owner Scott Jarvis.

Once on-site three moveable temporary steel towers, built especially for the project, were then used to support the sections during the erection process. Once four sections had been bolted together and a truss was in place, the towers were jacked down and repositioned in readiness for the next steel sections.

Speed was of the essence on this project and Apex says it erected three trusses, including all of the interlinking members – that comes to a total of 175t, every week.

For the erection process two mobile cranes were used, each one positioned either side of the ballroom, and working in tandem with a 300t capacity self-erecting tower crane together with a mini crane on the first floor ballroom slab.

“It would have been easier to erect the trusses one at a time with one large mobile crane positioned centrally on the ballroom floor,” says Mr Toon. “But the concrete frame construction sequence couldn’t accommodate this.”

By the time the steelwork was ready to be erected the ballroom’s concrete walls had already been cast, which meant the project team needed to hire in cranes with a capacity and reach to lift truss members over the two-storey, 8m high walls.

The steelwork programme has been completed on the project and the venue is booked for the first major events to take place towards the end of 2015. 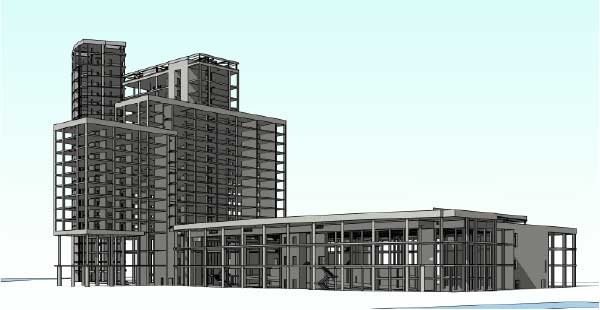 A further 400t of structural steelwork is being erected by Apex Steel Structures on other parts of the overall project. On the opposite side of the hotel tower to the ballroom, the company has erected a three-storey extension that will house a ground floor swimming pool with a conference space above.

Steel was chosen as the only option for the hotel extension as clear column-free areas were required with spans of up to 18m.

The top of the residential tower will feature rooftop penthouse accommodation with a winter garden, formed with tubular steel members. Together with further steel required at the top of the hotel this work comprises a further 100t of steel. These structures have been designed to be erected in small light sections, as each member has to be lifted into place by one of the site’s tower cranes. 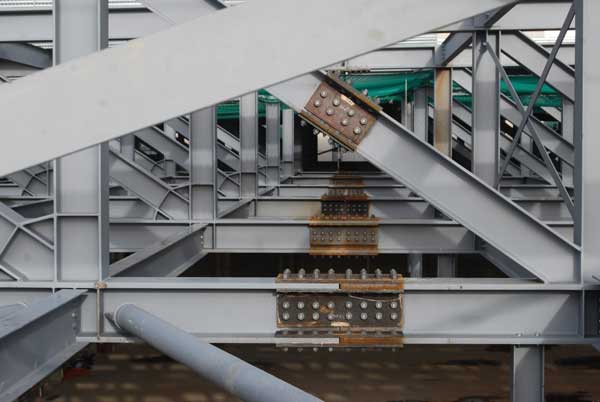 Dr Richard Henderson of the SCI discusses the steel truss roof over the InterContinental London – The O2 ballroom.

The span of the roof over the ballroom is about 42m, equal to 11.5 standard motorway traffic lanes and the clear height is 8m. Vertical structure like much of the rest of the hotel development is in reinforced concrete with shear walls providing lateral stability to the building. Speed of procurement and erection was a major criterion in the choice of roof structure. Consideration of the possible options for materials of construction and the corresponding implications for design risk, off-site manufacture, delivery and speed of erection rapidly leads to identifying structural steel as the favoured material.

Conventional wisdom (as set out in the Steel Designers’ Manual) suggests that parallel chord trusses have an economic span of between 6m and 50m with a spacing of one quarter to one fifth of the span. Economic span to depth ratios for such trusses are 15 to 25. Elements of 42m span about 2.5m deep at 8m centres fall squarely within these ranges.

A concrete roof deck at the level of the top chord, supported on transverse beams spanning 8m between trusses, provides lateral support in the permanent condition. This deck also ensures that the principal design combination of actions for the trusses is gravity so a Pratt truss (with the longer diagonal web members in tension) is an economic truss form. The top chord is in fact sloped at 1° to the centre of the span, giving a rise of about 360mm over 21m. The trusses are provided with vertical bracing at the ends of the span and two further panels of bracing within the span to stabilise them out of plane, which is necessary during erection. A sliding bearing is provided at one end, allowing plus or minus 35mm of movement.

The steelwork is all concealed and individual members are hot rolled UC sections with all webs in the vertical plane. The trusses are fabricated in four sections about 10.5m long for ease of handling, with fully welded joints between chords and web members. Splices in tension members are detailed with welded cover plates on one side of the joint and tension control bolts. In the top chord, the splices are detailed with end plates to provide a bearing connection. Cover plates are also detailed to carry the strut-moment.

Trusses are a well-understood, straightforward form of construction and provide an effective solution for the 3200 m² column-free ballroom.