One of the lakeside restaurants under construction

Known as Rushden Lakes the scheme is centred around a series of man-made and natural lakes in the Nene Valley. Located on the busy A45 and it has been estimated that 600,000 people live within a 30-minute drive.

Getting people to come will not be a problem as there will be plenty to occupy visitors including 30 retail outlets, a visitor centre and lakeside restaurants, while a boathouse will provide aquatic craft for hire.

The adjacent SSSI will be integrated into the scheme with footpaths and cycle ways even extending to neighbouring tourist attractions.

Crown Estate Regional Portfolio Manager Hannah Milne says: “Rushden Lakes will be the first in a new generation of shopping parks, setting an entirely new standard for the retail and leisure experience offered by assets of this type.

“We will see occupiers coming to Rushden Lakes that have never traded out of town before, demonstrating the quality of the scheme.”

Model of the lakeside restaurant 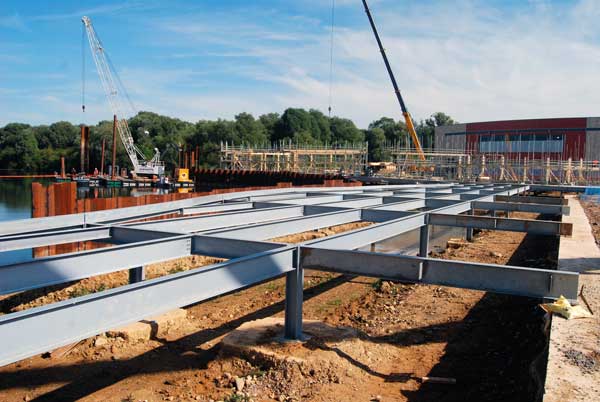 The boardwalk under construction

How the retail offering will look

The retail outlets are all accommodated within three large steel-framed structures, known as Terrace A, B and C. The latter two buildings house the project’s three anchor stores, House of Fraser (HoF) in C and Marks & Spencer, and Primark in B.

Terrace C is the longest of the retail buildings at 196m with the two-storey HoF store accounting for approximately one-third of the structure. This block is a portal-framed building with steel columns – typically 305UC sections – spaced at 7m centres and supporting rafters that create two 26m-wide spans with the aid of one line of internal valley columns.

Overlooking the scheme’s lake, the eastern end of the Terrace C (the part housing HoF) features a bull-nose rounded elevation. Steelwork has been facetted around a 66m radius to form this architectural feature.

Attached to the HoF part of the building the portal-framed structure narrows down to a width of 37m (with two 18.5m-wide spans) to accommodate five more smaller retail units.

Opposite C and on the other side of a large surface car park Terrace building A and B sit end-to-end pointing towards the scheme’s lakeside.

Terrace B is a 144m-long column and beam constructed building, gaining its stability from roof level bracing working in conjunction with the concrete floor that acts as a diaphragm.

One end of the building, measuring 51m wide, accommodates a two-storey M&S store, where steelwork is based around a 9m × 9m grid pattern.

Adjoining this store the building narrows to 31m and houses a single storey Boots store, while beyond this the structure then widens again to 38m to house a two-storey Primark and then decreases slightly in width once more for the final three smaller single storey retail units.

The Primark store has a similar grid pattern to M&S, while the smaller units have generous grid patterns of 8m × 15m and 9m × 18m.

Finally Terrace A is slightly longer measuring 157m, and this portal-framed structure will house 21 individual retail units. Each outlet will be accommodated within one of the structure’s 7.5m wide bays.

Typically this structure offers 31m-wide clear internal spans with the exception of one end of the building that widens to     37m and a small recess area that offers 26m wide spans.

“For flexibility this building has been erected as an entirely single storey structure, but it has been designed to accept mezzanine levels should tenants wish to add them,” explains Caunton Engineering Design Director Robert Weeden.
All of the retail Terrace structures may be slightly different but they do share one architectural detail and that is a 4.5m wide canopy that extends along each of the building’s main elevations.

These independent structures will be erected after the main steelwork and cladding programmes have been completed. Stubs attached to columns and protruding through the cladding accept the canopy structures, which are also supported by a series of columns.

The columns are predominantly 9m-high Circular Hollow Sections (CHS) where the buildings are two-storey high, and decreasing to 7m-high sections for the single storey elements.

Caunton Engineering, who have been contracted on a design and build package for the terrace, boardwalk and restaurant steelwork, is due to complete on-site work this month (November) and the first retail outlets will be open early in the Spring.

Aside from the scheme’s retail offering, Rushden Lakes’ main attraction will be the waterfront. A steel-framed boardwalk structure wraps around a section of the lake, supporting timber decking and a timber-framed boathouse and a visitor centre.

Forming the boardwalk’s curve around the lake’s edge are a series of curved box sections (pictured above). The entire structure is supported on a series of 1.5m-high columns, which are arranged in an 8m x 8m grid pattern.

Where the boardwalk supports the heavier boathouse and visitor centre, the steel structure has been stiffened with additional deeper beams to support a concrete slab.

The three terraces at Rushden Lakes demonstrate alternative framing solutions, with two terraces of portal frames and one which is a fully braced box, with simply supported rafters. Portal frames are rightly considered to be a very structurally efficient way of enclosing volumes – frames are lightweight, stable in-plane and only require bracing in the out-of-plane direction.

Despite their apparent simplicity, portal frames are relatively complicated structurally – their flexibility means that second-order effects are generally important and the potential for reversing bending moments mean that the restraints to the compression flange must be carefully considered. Comprehensive guidance is provided in P399.

The moment resisting connections at the eaves and apex can also be complex, so the use of software to design these connections is highly recommended. Although portal frame structures are often designed by the Steelwork Contractor (as was the case at Rushden Lakes) engineers often need preliminary sizes and the look-up tables given in P399 for S355 steel can be very helpful.

Designers should note that the preliminary sizes given in the earlier publication P252 are for S275 steel, which is no longer readily available in the UK.

Terrace B is a fully braced box, which is a useful reminder that other forms of steel construction can be an economic alternative to a portal frame. Terrace B includes extensive mezzanines, roof-mounted plant and a number of different spans, so the solution adopted was to provide plan bracing at the roof level and vertical bracing around the six commercial units that form the terrace. Rafters are simply supported beams. A fully braced box is a simple solution, amenable to manual design.

The connections are nominally pinned, as found in the “Green Book” series of publications. The compact connections can be an advantage if space is limited and does not allow haunched moment-resisting joints.

The disadvantage of simply supported members is the increase in structural depth as the spans lengthen, but this can be managed by the use of fabricated members. Within Terrace B, ordinary rolled sections were used because the building layout allowed the use of intermediate columns, reducing the span of the beams.

Second-order effects must still be assessed even in a braced box, though the calculation is simpler than the process for a portal frame. P365 demonstrates how to assess frame stability for a braced frame.