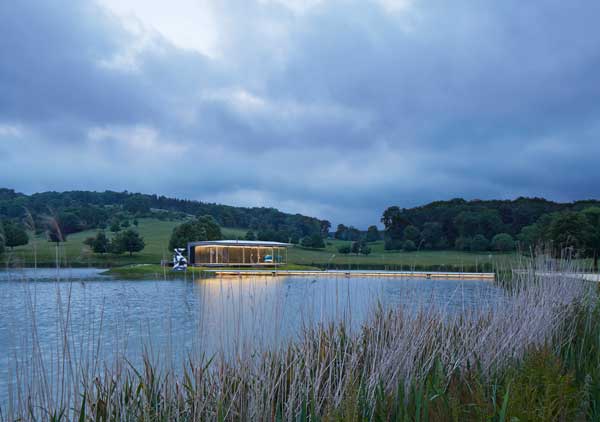 Designed in the English classical tradition of a pavilion in the landscape, the project re-interprets 18th Century design for the 21st Century.

The Island Pavilion will be used for entertaining during the summer months of opera, including dining, receptions, art exhibition and musical recitals and has been designed as a container to house a stainless steel sculpture by Jeff Koons entitled ‘Cracked Egg (Blue)’.

“The pavilion has been designed as a jewellery box on a lake and a place to enjoy, visit and be entertained,” explains architect Robin Snell.

The single-storey pavilion measures approximately 8m by 15m on plan and is 4m high, situated on the east side of the island. 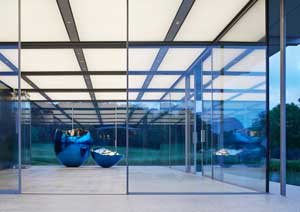 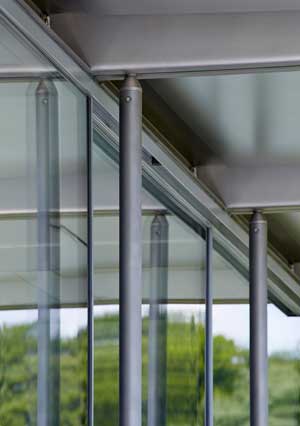 The structure is generally open plan, with cellular accommodation to the rear housing kitchen and washroom facilities. The primary space is a single room with glazed walls. None of the walls contribute to the structural system which allowed the pavilion to be constructed quickly and easily onsite.

The pavilion is formed from three-pin portal frames at 3m centres, made from bespoke stainless steel sections for the rear and top elements. The columns supporting the frames at the front of the building are pin-ended stainless steel CHS posts.

The frames sit on a galvanized steel structure set approximately 750mm from ground level. The floor construction consists of galvanized channel sections, which support secondary steel members and a structural steel weldmesh floor on which the architectural finishes are applied.

The floor structure is connected to structural steel supports at the front and back of the building, which also forms the supports for the roof frames.

The roof of the pavilion is formed by a series of trusses that carry both the ceiling and roof covering. A profiled metal insulated decking is used to support the finishes, and acts to create a diaphragm that carries elevation wind loads to the supporting elements of the stability system.

The structure is stabilised by the three-pin portal frames in the transverse direction. Longitudinally the vertical legs of the portal frames at the rear of the building are portalised together with a circular hollow steel member at the eaves.

The pavilion was constructed using a series of prefabricated components that were delivered to the island on a barge.

The key components include of a series of 8m by 3m galvanized steel floor ‘cassettes’ with steel perimeter channels, and secondary steel beam elements spanning in-between at 1m centres. A steel grating is fixed to the tops of the secondary steels to form the support of the floor and provide racking strength to the ‘cassettes’ during the erection sequence.

“Steel was used throughout as the primary construction material so the entire project could be prefabricated off-site to high quality standards and quickly erected on site,” says Mr Snell.

“Matt bead blasted stainless steel was selected and used throughout the pavilion for its finish qualities, its minimal long-term maintenance requirements and in direct contrast to the highly polished stainless steel sculpture contained within.”

The foundations for the building consist of driven steel tube piles and these in turn support a grillage of reinforced concrete ground beams that carry the loads from the superstructure.

The bridge is approximately 42m long by 2.1m wide with a series of intermediate supports to carry the bridge deck.
“Designing and constructing the foundations and the superstructure of the bridge was challenging due to the project’s location in the middle of a lake,” adds Momentum Project Engineer Stephen Fisher.

The bridge is formed by a single 355 by 16 CHS spanning between foundations at 10.5m intervals. Tapered ‘I’ beams are welded through the CHS at 2m centres to support the structural ‘T’ edge members. A profiled aluminium deck spans between the edge members, perpendicular to the span of the bridge. The deck cantilevers 300mm over the structural ‘T’ edge members. The CHS member carries both the vertical bending forces when the bridge is fully loaded, and also the induced torsion when the deck is loaded on one side only.

The bridge is stabilised laterally by pairs of inclined CHS sections bolted down to the foundations.

“The client had envisioned a building which would be both modern and complement the existing landscape; at once a functional entertaining space and a folly to house an extraordinary contemporary sculpture. The innovative use of glazing and the steel of the pavilion and bridge has achieved this vision,” says Wormsley Estate Manager Patrick Maxwell.

The project took six months to complete and was a lesson in teamwork, integrated design and working directly with steelwork contractors, resulting in a crafted product utilising contemporary materials and technologies.

In summary, the judges say the project is a testament to the pursuit of technical refinement when economy is not the key.