Posted on July 13, 2015 by NSC in Commendation, SSDA Awards, This month's featured stories 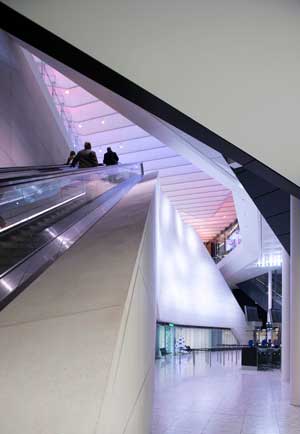 Terminal 2B is a satellite pier for the new Heathrow Terminal 2 development and the first UK airport facility to achieve a BREEAM rating of ‘Very Good’.

Sitting above a three-level basement, the building has been designed whereby arriving passengers use the floor above departing passengers, inverting the familiar ‘undercroft’ experience of the arrivals journey.

Among the first steel elements fabricated and installed onsite were the 163 plunge columns, assembled from the heaviest UC section and two 40mm thick steel plates, welded together to create a thick-walled box. The efficiency of this section and the novel ‘top hat’ connection – which transfers load from the concrete apron slab into the columns – allows unrestrained column lengths of up to 15m despite supporting axial loads of up to 20MN.

“To fit in with the groundworks team, who were constrained by various airport workings, we reversed the erection sequence and worked south to north,” says Severfield Project Manager Andrew Luter. 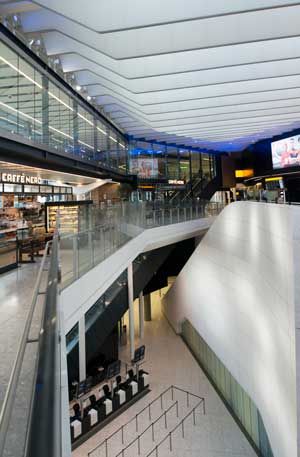 The steelwork frame of the pier consists of three basement levels and four above ground levels topped with a steel roof.

The most striking and noticeable architectural steel features are a series of internal CHS columns with bespoke connections that form the Departures and Arrivals halls.

The columns stand the full height of the building and have a pencil point connection at the top and a wishbone shaped connection further down that joins to the pier’s second floor.

To create a large, open space for the central hub, long-span cellular beams were used spanning onto the Vierendeel truss of the arrivals level bridge. This reduced the number of columns needed within the open area to just two, discretely positioned beneath the footbridge.

Prefabricating elements offsite ensured construction efficiency, minimised wasteful site-based construction activity and eliminated impacts on airport operations. The use of prefabrication, together with time-based 4D BIM, allowed virtual testing of safety issues, which could then be designed out.

Summing up, the judges say the varying degrees of complexity of the steelwork, and its architectural exposure, were very well planned, detailed and executed.