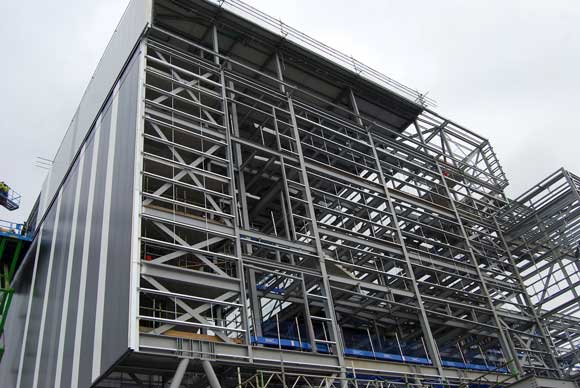 Steelwork progesses on the cinema

Offering 12 cinema screens and a host of retail and restaurant outlets, the Drake Circus leisure development is set to transform the site of a previously outdated bus station. Martin Cooper reports from Plymouth.

The five-year scheme aims to transform this key location to make sure it looks its best in time for the Mayflower 400 celebrations, which will see thousands of tourists descend on the city in 2020 to commemorate the sailing of the Pilgrim Fathers to America in 1620.

A number of schemes are currently under way and one of the largest is the £35M Drake Circus leisure development, which is set to transform a former bus station site into a key gateway entrance to Plymouth City centre.

Named in honour of the city’s most famous seafarer and explorer Sir Francis Drake, the Circus is already the location for a large shopping centre and the new development will complement these existing facilities.

Construction work is being carried out by McLaren Construction, with BHC fabricating, supplying and erecting 2,700t of structural steelwork for the main frame of the scheme.

The development, which is set to open in Autumn 2019, will be 9,200m² and comprises a 12-screen Cineworld cinema, 15 restaurants and bars, including a sky bar above the cinema to capture stunning views of the city and its coastline, retail units as well as 420 car park spaces.

The scheme is one large steel frame, measuring 130m-long × 50m-wide at its largest point. The frame is braced and typically makes use of crossed flat vertical bracings to provide lateral stability in conjunction with composite floor decks and roof bracing. 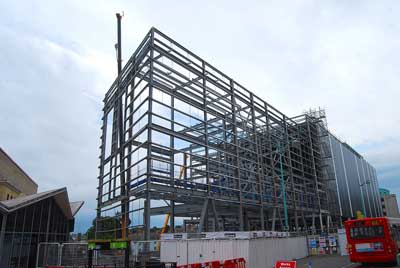 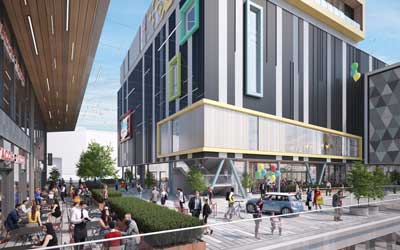 How the cinema block will look

“In some locations, we have utilised struts in place of crossed flats to accommodate circulation routes. At ground floor retail level, we were very limited in locations for bracing. As a result, we agreed with the architect and the client that a bay of feature bracing would be located within the walkway at podium level,” says Evolve Consulting Engineers Project Engineer Margaret Hanway.

“BHC has worked with the architect to produce some bespoke connection details for this braced bay which makes a real feature of this part of the structure that will be exposed in the final scheme.”

The project’s footprint sits below an existing viaduct that supports Exeter Street along the site’s northern elevation. Access to the development along this street will be at podium level, while to the south along Bretonside access is gained at lower ground level.

Below the podium three levels of car parking are accommodated at lower ground floor and upper ground. In between these two steel-framed levels, a middle car parking level has been introduced into the scheme by converting an area under the viaduct which previously housed shops and spaces associated with the bus station.

Because of the mixed-use nature of the development there is no regular grid pattern to the steelwork. As well as incorporating the varying columns lines, one of the main design challenges was to minimise transfer structures without compromising the quality of the retail or car parking spaces.

Although the design team worked hard to minimise the amount transfer structures, some were required.

“We have located the majority of transfer beams at podium level where there is suitable structural depth. Due to the presence of a deep build-up of insulation and finishes to the podium, we have been able to raise the top of the steelwork of many of the transfer beams to suit the structural level, which has allowed us to maximise the structural zone available,” adds Ms Hanway.

In places, plate girders as opposed to standard UB sections have been used to maintain the clear heights required below.

By working closely with BHC, Evolve says it was able to utilise some wide flange European Sections which allowed it to minimise the number of bespoke steel sections, which also benefitted costs and programme.

Demolition work on the site was completed by the end of December 2017, and this then allowed the erection of the steel frame to commence early this year.

BHC began its steel programme by erecting the cinema block and the lower levels directly beneath it. This is the tallest part of the scheme, rising to a maximum height of 35m above the Bretonside street level.

“Starting with this part of the frame allowed our cladding contractor to get started as soon as possible, by following on directly behind the steel erectors once parts of the frame had reached full height,” says McLaren Construction Project Manager Richard Gray.

The truss sits within level five of the cinema block, directly on top of the largest IMAX screen. It will form the column-free sky bar, which will sit within its depth.

The new cinema will incorporate state-of-the-art audio and visual technology with screens ranging in size from an 80-seater up to a giant 450-seat IMAX auditoria.

There are very strict isolation criteria for the cinema block to adhere to in order to prevent noise transfer between auditoria and also from circulation spaces. The steel frame to each auditorium is a completely independent frame isolated on acoustic bearings within the steelwork connections. There are also isolation joints incorporated into the composite slabs to further prevent noise transfer.

Summing up, Plymouth City Council says: “We’ve all been watching with huge interest the progress of this scheme right here in the heart of Plymouth. It’s going to transform this part of the city centre, create a modern and welcoming approach, as well as a great destination for people to watch a film, eat and enjoy everything Plymouth has to offer.

“The scheme will create 350 permanent jobs and will be a great benefit to the city’s night-time economy.”