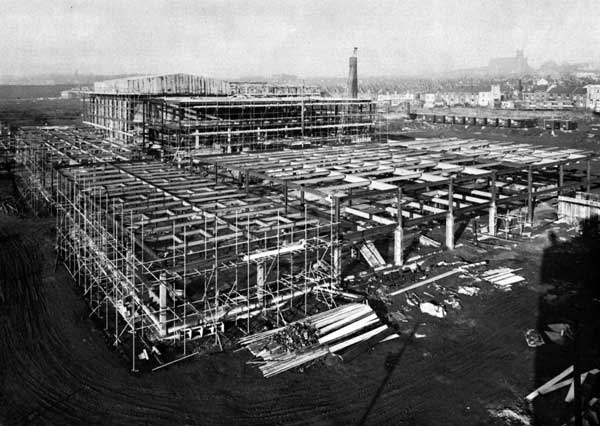 Steelwork under construction: quick erection time was an outstanding feature of this project

Yorkshire Television Ltd began as a race against time in the middle of 1967 for on 12 June the company was allotted the new ITV broadcasting contract for the completely new Yorkshire TV region: and transmissions were due to begin in July 1968. The company was thus faced with the task of designing and constructing a major new studio complex within this extremely short time period.

The architects were commissioned to prepare a feasibility study as part of the company’s overall proposals submitted to the ITA. Their proposals were for a major TV Centre costing £1.5m on a site made available by the City Corporation at Leeds and which was to be completed in two stages. The first stage included all the essential production facilities which the company would need in order to begin broadcasting in July this year, further studios and administrative offices to be completed as soon as possible thereafter.

The architects built up and co-ordinated a full project team which was prepared to go ahead at high speed with design and construction as soon as the ITA announced its award. Prior to the design team commencing its final design of the building and its structure, the general contractor carried out some initial studies for the construction period required for the superstructure in both steel and concrete and, as a result of these investigations, it was concluded that a steel frame would give the shortest construction time.

An additional factor in the decision to adopt a steel frame was that in view of the time factor involved, structural design had to proceed concurrently with and at times ahead of general planning and the relative ease of adaptability of a steel frame was felt to be desirable. The main requirements of Phase I construction consisted of two studios measuring 80ft by 64ft and 40ft by 40ft respectively with three storey ancillary accommodation housing technical areas, control rooms, ventilation plant etc and a single-storey cafeteria, kitchen and workshop space. For acoustic reasons the structures of the two studios are entirely independent of the surrounding three-storey structure. The frame of the larger of the two studios included in the first phase is constructed with 60ft span lattice trusses supported on steel stanchions. 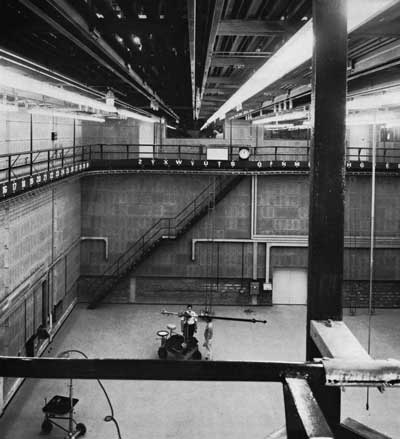 Interior of studio: view from the gallery showing the windows to the control rooms, production lighting grid and the acoustic treatment to the walls.

Final lateral stability of this studio structure, which, of course, derives no support from the surrounding structure is provided by 9 in thick infill panels of brickwork necessary for acoustic reasons but temporary vertical bracing was used to provide initial stability until sufficient brickwork had been constructed. The studio roof structure carries a complete grid of suspended steelwork over the entire area of the studios to facilitate the support of the extensive production lighting required. In the interest of speed the steel structure was kept as simple as possible. Composite floor construction was adopted for the three storey block. A proprietary precast prestressed plank floor with in situ topping was chosen for the floor slab and this was kept to a standard thickness throughout, varying intensities of superimposed loading being catered for by adjusting the centres of the steel floor beams within the general stanchion grid of 25ft by 20ft. Black bolting was used for site connections as far as possible with high strength friction grip bolts where moment connections were required. Concrete encasure of the steelwork was confined to the stanchions and perimeter wall beams, the necessary two hour fire protection being provided elsewhere by the use of vermiculite panel cladding.

Final design of the structure was begun towards the end of June 1967 and the steelwork sub-contractor commenced erection during the last week in August 1967 and completed in November 1967 within days of the programme’s target. During this comparatively short period the steelwork sub-contractor had erected some 450 tons of steelwork and carried out numerous detailed revisions to the structure which had become necessary as final planning proceeded. Sections of the building were completed and handed over to the clients to begin technical installation progressively from 5th March 1968.

Second phase construction is programmed for completion in early 1969. This phase includes a further main studio measuring 80ft by 100ft, additional three-storey accommodation and a large single storey scenery workshop. A further 250 tons of steelwork are involved, the construction adopted being similar in all respects to the first phase.

The studios are sited at the north-west end of the Kirkstall industrial estate about one mile from the centre of Leeds. The site is a slum clearance area, the greater part of which is to be a new landscaped public recreation space which will adjoin the new studios.

These are the first new studios in Britain to be designed for colour transmission from the outset.