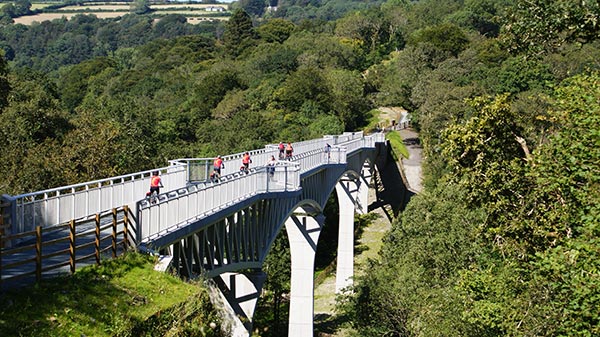 Steel was used to construct Gem Bridge in Dartmoor National Park, as the structure had to be sympathetic to its surroundings and built with minimal environmental impact.

The construction of the bridge received £600,000 of European funding from the Cross Channel Cycle Project and the scheme is also part of wider initiatives to establish better cycling tourism links on both sides of the English Channel.

As the cycleway follows the track bed of a disused GWR railway line, Gem Bridge is a replacement of the original Brunel Viaduct that was demolished in the 1960s.

The bridge is 200m long and is elevated 24m above a valley floor. It has five spans and comprises an elegant open steel truss fabricated from hollow sections, with each span having a graceful arched profile.

The deck is formed from precast panels attached to the top chord of the truss. Viewing galleries are provided at each of the four intermediate piers to give refuge to users.

A steel truss superstructure was favourable to the planning authority and the other stakeholders as it could be built quickly, with minimal temporary works and fewer on site deliveries than other options. It has a light and open appearance allowing it to easily blend into the wooded area.

Buildability was a key factor for the project given its remote location, with the only access for deliveries, the cranes and other plant equipment via the Drakes Trail cycleway.

Comprehensive planning and engagement was required from an early stage to ensure that the structure could be constructed.

“Because the bridge crosses a steep valley in a National Park it had to be constructed with cranes positioned in the valley and with minimal impact to its surroundings,” says Ben Naylor, Devon County Council Project Manager. “A steel structure was the ideal solution.”

The bridge’s truss was fabricated and painted offsite before being transported to site in sections ready for the erection.

“Compared with other options for the superstructure, this significantly reduced the exposure of operatives to work at height and reduced the need for challenging falsework,” says Rob Williams, Dawnus Construction Director.

David Waterman, Ramboll Project Engineer adds: “Steelwork offered us the most cost-effective solution for this job. Prefabricated steelwork also allowed quality to be managed and although provision for transporting large sections had to be made; the number of deliveries to site was greatly reduced.”

The structural design of the truss has been optimised not only to minimise material quantities, but also to improve constructability and appearance. Member weights were optimised to reduce steel weight and lessen the visual impact. Splice locations were also carefully selected in conjunction with the construction team to minimise the number of lifting operations.

Both the conceptual and detailed design of the structure was focused on achieving a bridge that met the aesthetic objectives and was readily constructible.

This is a simple, yet elegant, replacement for a previous historic structure which respects the environment and the heritage of the site.  The bridge carries pedestrians and cyclists, and spans a deep valley. Site access for construction presented considerable difficulties, which were overcome with careful planning and ingenuity.

The result is a bridge which the public enjoys, and of which the client is proud.