Posted on July 18, 2012 by NSC in Award, Projects and Features, SSDA Awards, This month's featured stories 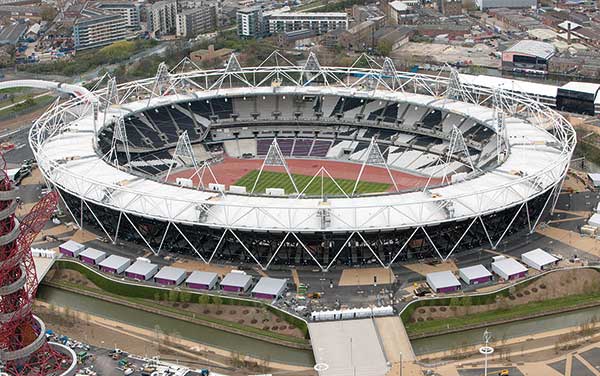 Completed within budget and early, the London 2012 Olympic Stadium has also achieved the client’s sustainability objectives, and is consequently the lightest structure of its type in the world.

As the centrepiece for the London 2012 Olympic and Paralympic Games, the 80,000 capacity Olympic Stadium had to be completed quickly and in readiness for its handover last year. This was achieved with time to spare as the project team crossed the finishing line three months early, giving the organisers more time to host test events and fine tune the venue.

“This was a ground breaking project,” says Ian Crockford, Project Sponsor for the ODA (Olympic Delivery Authority). “This is not only the most sustainable Olympic Stadium ever built, but it’s also the most flexible,”

After the Games the stadium could be scaled down to a 25,000 seater by demounting the steel framed upper tier, leaving behind a legacy facility for athletics and other sports.

“This was an important part of the project,” adds Mr Crockford. “We were not just constructing a stadium to host the Olympics, we are also creating an arena which will benefit the local community for years to come.” 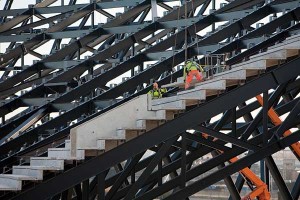 Sustainability is always a key client objective, and this project has a number of green credentials to its credit. Only 10,700t of structural steel has been used on the project, making it the lightest Olympic Stadium to date. In stark contrast to the 40,000t needed for Beijing’s Birds Nest Stadium, the majority of London’s steelwork is demountable and can be reused at a later date. Also, large diameter tubes used on the project have been fabricated from recycled material from a gas pipeline project.

Early works saw more than 4,000 permanent piles installed for the stadium’s foundations, while on top of this more than 100 × 5m high concrete columns were erected to support the podium and lower ground floor which contains back-of-house facilities.

The site also sloped and this had to be incorporated into the design by locating the athletes’ changing rooms and warm-up areas in a basement area at the lower end of the slope beyond the bowl.

Above the concrete bowl, which consists of the lower or permanent tier of the stadium, Watson Steel Structures erected the initial upper steelwork. This consisted of 112 steel rakers, measuring 35m long and weighing 25t each, to support the upper tier terracing.

Above this sits the signature roof, which consists of a 13m high lattice compression truss that rings the stadium and is formed by 900mm tubular steelwork. The truss was lifted into place in 28 sections, each 30m in length and weighing 90t. They were individually lifted into place by a 1,350t capacity crawler crane positioned in the middle of the playing area.

Paul Hulme, Watson Steel Structures Project Manager, says: “This truss was only self stable once the last piece had been installed, so we had to design and erect temporary works which stayed in place throughout this part of the steel erection process.”

The erection of the 14 lighting towers followed and this was another challenging part of the project due to their support being provided by the cable net. The towers were not self-supporting until all 14 had been erected and the final high level circumferential cable had been connected and prestressed.

In summary, the judges say the requirement for a severe reduction in capacity after the Olympics has resulted in a lean design, with an expressed exoskeletal steel superstructure.