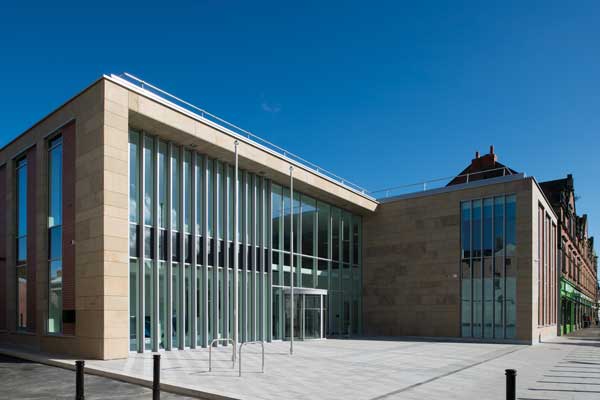 Forming an important part of an ongoing cost-saving exercise, Cumbria County Council said by moving the majority of its staff into the new premises, it will be able to sell more than 20 older offices throughout the city, saving it around £1M each year.

Located on the historic Botchergate, the headquarters building features 450 workstations and accommodates around 700 staff, with hot-desking, mobile working and modern technologies helping to further slash overheads and cut the Council’s carbon output in half – from 1,546t to 826t.

As well as fabricating, supplying and erecting the steel, Border also installed metal decking in the two-storey part of the building and placed the precast planks in the office block, all of which was done with a single 50t-capacity mobile crane.

Commenting on the erection programme, Border’s Senior Contracts Manager Stuart Airey said: “With over 50 loads of concrete and 20 loads of steel, the steel and concrete works had to be planned and coordinated meticulously to ensure continuity of the build. We had a 12-week programme for all of our works but achieved it in eight weeks, which was greatly appreciated by the Eric Wright Construction site team.”