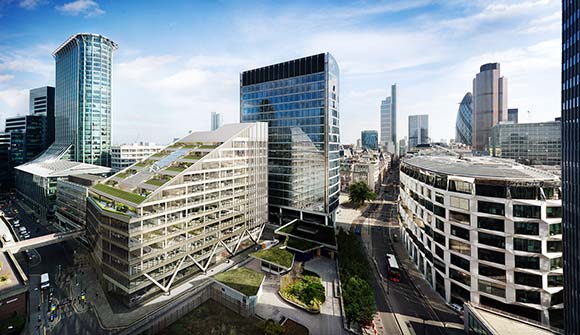 Some parts of the UK have seen a significant slump in the number of office developments being undertaken in recent times, but this can’t be said of the City of London.

New landmark structures seem to be continually rising up within the Square Mile and a current example is Moorgate Exchange, a 12-storey office building on the site of an old telephone exchange.

MGPA, an independent private equity company, and CarVal Investors in conjuction with Quadrant Estates are speculatively developing the site.

Architect HKR has designed a large rectangular block which will stand out from its more sober looking neighbours as its roof line is dominated by an angled façade containing stepped gardens on the six upper levels.

Designed to achieve a BREEAM “Excellent” rating, the 20,252m² steel framed building will have uniform, square open plan floorplates arranged around a central atrium and two main cores. The design ensures flexibility, as all of the floors can be subdivided if necessary.

Floor sizes vary from 2,229m² to 743m² on the topmost office level. The building will also include two rooftop plant equipment floors and a two-storey basement. 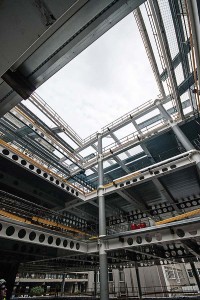 The building’s large open plan floorplates wrap around the atrium

Overall, the structure has been designed to achieve a BREEAM “Excellent’ rating.

At ground level, the most striking visual elements of the building are two rows of V-shaped columns, positioned along the two longest elevations.

The two-storey high raking columns were fabricated from square hollow sections which were encased in concrete, producing members that taper from 900mm to 600mm.

“We suggested raking columns for this one area of the building, the architect then liked these features and decided they would add symmetry to the structure by running the length of the two main elevations,” explains Iain Sproat, Ramboll Design Engineer.

In total there are four pairs of V-shaped columns on each side of the building. Weighing 11t each, the columns were erected individually and are bolted to a ground level two-way node that helps form the desired V formation. The nodes weigh 3t each, and will eventually be encased within a concrete base. At the top, each raking column is connected to the underside of the second storey beam by a welded connection.

Steelwork contractor Severfield-Watson Structures had to temporarily support each raking member during the erection process.

“Once each pair of columns was connected top and bottom they were released from their props and we could then move onto the next pair,” says Terry Barnett, Severfield-Watson Structures’ Site Manager. 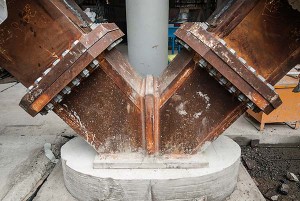 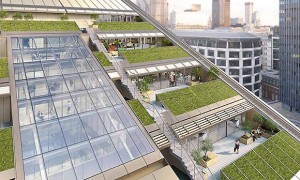 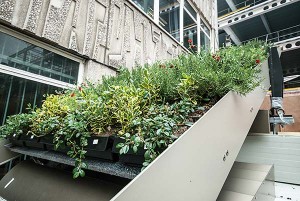 Within the structure, long span open column free areas dominate the design. The client wanted to maximise the floorspace and consequently typical spans in the building are 15.5m long.

The majority of the columns are 457mm diameter CHS members to maximise the available floor space. They have been in-filled to achieve the required fire rating and left exposed by the architect as part of the design.

Dynamic behaviour needs to be considered on such long spans and Ramboll decided to use stiffener beams to achieve the required floor response.

“By inserting secondary or stiffener beams at midspan between the main beams, we stiffened the floor without adding much more mass and successfully reduced the response factor,” says Mr Sproat.

Stiffener beams and the large open grid pattern remains the same all the way up to the top office level. However, above level six each floor steps back, creating a sloping façade on the northwest elevation.

This creates outdoor terraces that require a deeper floor zone, due to waterproofing and drainage. The structural design however requires that the upper floors keep to the same floor to ceiling heights as the lower levels.

To achieve both these aims, the Fabsec floor beams were reduced in depth on these floors, with a shallower but heavier section being used.

As the useable floor plates get progressively smaller above level six, a lightweight steel frame is being added to the main frame. This light steelwork framing cantilevers out by 1.5m and extends the office floorspace.

Close coordination with the cladding installation is key to this part of the project, as the light framing material has to meet the tight glazing tolerances.

A major feature of the development is the central atrium, positioned midway between the structure’s two cores. This large void penetrates the building’s heart, starting at level one and topping out with a glazed roof halfway up the sloping façade at level eight. 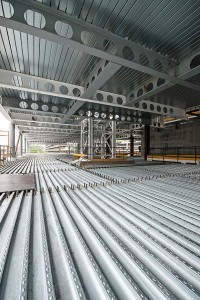 Large open floors are a feature throughout the building

Richard Norris, Project Director for Skanska says: “Over the years the team has built up its knowledge and expertise from working in the City of London on major commercial projects that involved complicated steel frames. We have applied this experience to the Moorgate Exchange project and worked with all stakeholders to plan for any challenges that a complicated structure like this can create, to ensure a seamless project delivery for our client.

“The relationship between Skanska and Severfield-Watson has developed and strengthened over the years because employees from both companies have worked together on previous projects.

Severfield-Watson’s 20 week steel erection programme is due to be completed in early September. The entire Moorgate Exchange project will be completed in the first quarter of  2014. 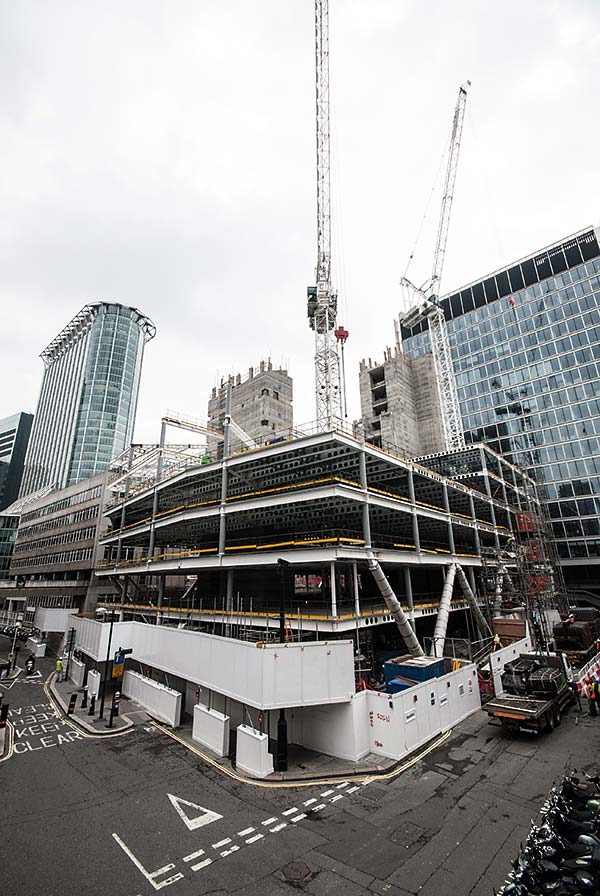 Step back and admire the columns

A transfer system at second floor level enables the steel frame to step back 1.5m on two elevations, meaning the V-shaped columns are outside of the main façade line, thereby emphasing their aesthetic appeal.

The transfer structure has also been used to create a column free entrance area by hanging the first floor above the entrance foyer from a series of steel hangers. This means no columns need to be installed within the main lobby.

Designing deeper cellular floors beams for the second floor level has helped form the transfer system. Overall the structure has 550mm deep beams, but here the depth has been increased to 700mm.

The building’s first floor will be used as a trading floor and will therefore require more services than the other office floors. Deeper beams with larger services holes were more efficient, not only to form the transfer system, but also to accommodate the extra services.