Bridging the A1 gap 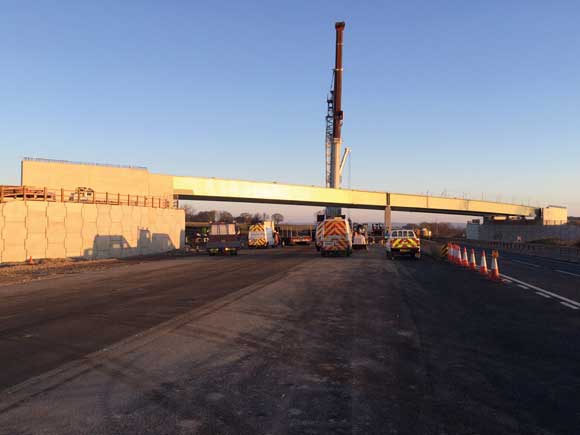 Eight steel composite bridges are being installed as part of the A1 upgrade in North Yorkshire.

FACT FILE
Bridges on A1 Leeming to Barton upgrade
Main client: Highways England
Main contractor: Carillion/Morgan Sindall JV
Structural engineer: Aecom
Steelwork contractor: Cleveland Bridge
Steel tonnage: 1,431tAs the only section of non-motorway on the strategic M1/A1(M) route between London and Newcastle the busy 12-mile section between Leeming and Barton in North Yorkshire is being upgraded from a dual carriageway into a three-lane motorway.

Once completed the scheme will unlock growth and boost the economy by creating a continuous motorway-standard route that will also improve journey times and increase safety.

This stretch of road carries approximately 69,000 vehicles every day and, according to Highways England, it is not entirely fit for purpose for today’s traffic volume.

It suffers from poor alignment with numerous side roads and minor lanes entering and exiting, which has contributed to the accident severity ratio being significantly higher than for other similar roads.

A major part of this project is the construction of new bridges that either span the widened road or carry the new highway over streets and rivers.

Eight of these new bridges are steel composite structures and they are being fabricated, supplied and erected by Cleveland Bridge for the Carillion/Morgan Sindall JV.

The project’s structural engineer is Aecom, and its Principal Engineer Peter Robinson explains the choice of materials for the bridge’s design. 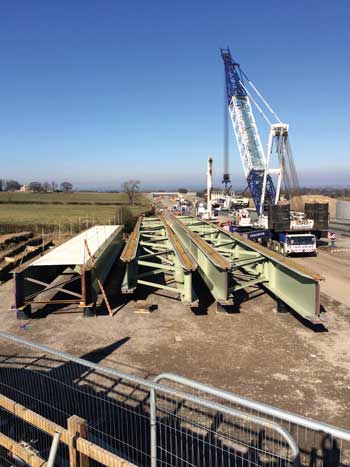 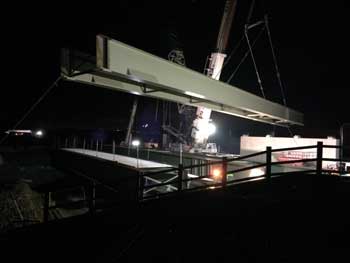 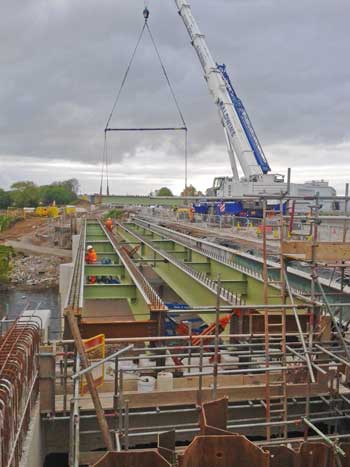 “We had to look at a number of criteria when choosing which materials to use for each bridge. Steel was used for the longer span structures because it is lighter than other materials and so more cost-effective, while another important factor was installation and getting materials to site. Steel beams and components are generally fabricated offsite and then quickly assembled and erected on site, which causes minimal disruption.”

All of the steel bridges were modelled in 3D using the Autodesk Revit programme. This was then inserted into a BIM model, which proved to be critical for providing toolbox talks on site and to help the various trades carry out clash detections.

The longest steel bridge on the scheme at 86.5m and the one with the biggest steel tonnage at 398t is the Kneeton Lane Overbridge, which is located just north of Scotch Corner.

This structure consists of two spans supported on reinforced earth abutments that have been squared up to allow for a semi-integral form of construction.

The central pier however is skewed to follow the alignment of the A1(M) below; this results in asymmetrical spans.

“The bridge was checked for lateral torsional buckling in the temporary condition using the analysis package Lusas. Because of the skewed pier, significant twisting occurred in the model which led to the use of plan bracing to provide the required stability,” says Mr Robinson.

To install this structure Cleveland Bridge delivered six braced pairs of girders, each measuring 2.5m deep, to site and assembled them into units, each measuring 15m wide by 23.75m long. This assembly work was carried out using 500t-capacity mobile cranes and done on the temporarily closed northbound carriageway of the A1.

“We then painted the bolted connections and the main contractor was given access to fit the permanent formwork to the assembled girders. This reduced the need for additional road closures to install the formwork when the girders were in position,” says Cleveland Bridge Construction Manager Ian Brierley.

The 500t crane was then replaced with a 1,000t-capacity crane, which lifted the four sections into place during two consecutive overnight road closures, with the heaviest lift weighing 170t.

A similar procedure for a near identical bridge was carried out at the southern end of the scheme near the village of Leeming. Known as the Low Street Overbridge, this structure over the A1 is slightly lighter requiring 378t of structural steelwork.

A slightly different approach was needed for the Agricola Underbridge that carries the A1 across the River Swale, just south of Brompton.

Agricola is an existing three-span steel composite semi-integral structure, which has been widened to accommodate the new three-lane highway plus its hard shoulder.

After the abutments and centrally-positioned pier had been extended on either side, the southbound and northbound elements of the bridge each required 87t of steel that equated to four new 1m-deep girders each with an overall length of 57m.

Each side of the Agricola Underbridge was installed in a single visit using a 200t-capacity mobile crane positioned on the existing and temporarily closed A1 bridge over the River Swale.

The structure replaces the existing Fort Overbridge, which had insufficient spans for the widened road. As the structure is near the Roman site of Cataractonium some archaeological works were undertaken prior to the work starting on the new bridge.

According to Aecom the requirement to include a number of large services proved to be a challenge during the design of this bridge.

“Working closely with Cleveland Bridge and the various utility companies a solution was found to locate the services within steel ducts beneath the deck slab supported on the cross bracing. The bridge steelwork will be installed with the ducts already in place reducing the number of lifting operations on site,” explains Mr Robinson.

Summing up the steel bridgeworks, Mr Brierley says: “All of our bridge beam installations have been required to take place during a temporary closure of the A1 or its service roads. This required careful planning of the works to allow the programme to be achieved and avoid delaying the reopening of the A1 and the associated disruption to national traffic.” 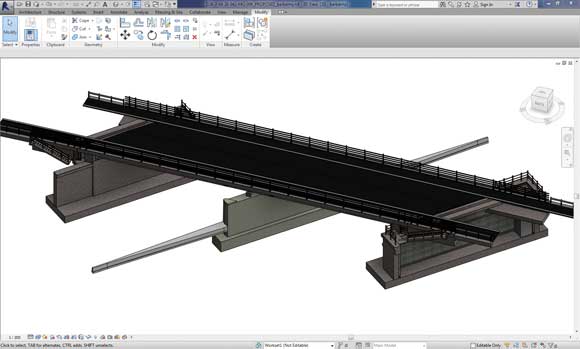 Fort Overbridge will be the last steel bridge to be installed