A lesson in offsite fabrication

The construction of a North Wales school has reaped the benefits of using offsite fabrication as weeks have been shaved off of the construction programme. Martin Cooper reports.

Denbighshire County Council and the Welsh Government, through the 21st Century Schools programme, are funding the project.

A new steel-framed teaching block, where a number of time-saving offsite manufacturing procedures have been utilised, is the cornerstone of the entire development.

Once this building is completed and open later this year, with students and staff fully decamped in it, phase two of the scheme will begin which includes refurbishing the existing school structures. 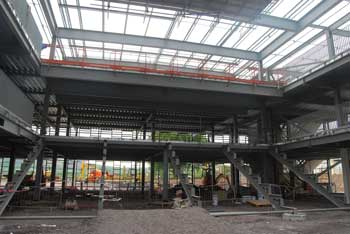 Exterior visualisation of the new school 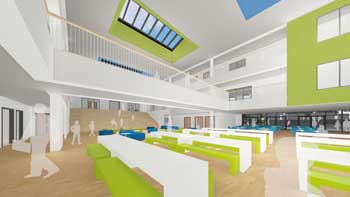 Interior visualisation of the new school

“No material left site as it was all moved to another area of our plot to be used later in creating new playing pitches for the school,” explains Willmott Dixon Construction Manager Brian Hanlon.

As with many construction projects time is of the essence and the choice of steel as the framing solution for this job has paid off.

Due to a few inclement weather stoppages and a period of downtime to relocate some great crested newts from the site, the project may well have found itself behind schedule. However, due to the steel package being completed in eight weeks, instead of the projected 13, the job is actually ahead.

“We pre-assembled all of the steel window frames at our facility, which then speeded up our programme on site considerably,” says EvadX Managing Director Simon Adams.

“The cold rolled framing system was then fixed to the window frames on site onto previously shop-welded connections, which allowed the remaining cold rolled elements to be installed quickly.”

Another time saving procedure EvadX used for their steel package was to supply and manufacture balustrades for the areas of the first and second floors that overlook the central atrium. Again these were fixed to beams on site with the beams having shop-welded connections to receive the balustrades that made installation quicker.

The balustrades have also doubled up as edge protection during the construction programme.

“Basically once an area of the main steel frame was erected we had another gang following on behind immediately installing the cold rolled elements,” adds Mr Adams. “This meant the building was watertight much quicker.”

Overall the new three-floor steel teaching block is a rectangular building measuring 60m x 40m that will be connected to the existing school via a first floor enclosed 11.5m-long link bridge.

“The structure is a steel-frame for a number of reasons,” says Caulmert Director Paul Savile. “Contractor preference, the building lends itself to a steel design, while resource availability in North Wales favours steel.”

The K-bracing consists of hollow sections that also support the building’s cladding, thereby creating a reduced wall thickness and flush internal walls. This has also created a cost saving as the building has a reduced footprint that in turn equals less materials.

The building’s internal make-up consists of classrooms arranged around the upper two floors, with each floor containing a circulation route that wraps around an internal atrium. A link bridge crosses the atrium at the top level, adding architecturally to the design and providing extra circulation.

“This link bridge, as well as the one spanning between the new build and the existing school, would have been too heavy if we hadn’t gone for a steel design,” adds Mr Savile.

The ground floor of the new building will also house some teaching space, along with a dinner/canteen area and a performance space with terraced seating occupying the open column-free space within the atrium.

Three roof lights positioned in the atrium’s ceiling will allow plenty of natural daylight to flood into the ground floor and the inner parts of the school.

The new extension will be fully occupied at the beginning of the New Year and Willmott Dixon will then start refurbishing the existing school buildings and creating new playing fields, with the entire project due for completion in September 2017. 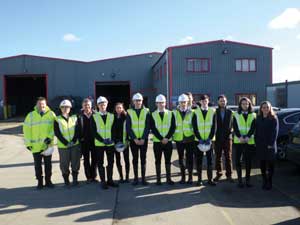 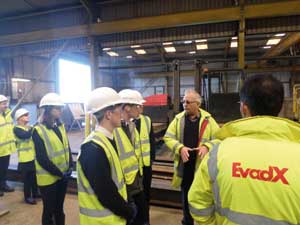 Prior to the steel erection programme getting under way, students from Ysgol Glan Clwyd were given a unique first-hand experience when they visited the EvadX facility near Rhyl. They saw the production of the steel frame that has formed the structure of the school’s brand new teaching accommodation.

A total of 21 pupils were able to see the fabrication process, from the detailed design and creation of the 3D model within Evadx’s drawing office, to the CNC machinery in the factory, to the planning for the delivery and erection of the steel frame.

EvadX also gave pupils an insight and view of the industry, informing students of the apprenticeship opportunities in the industry and specifically in relation to EvadX.

The visit was extremely fruitful for one student. Morgan Davies was so impressed by what he saw he immediately applied to be taken on as an apprentice in the EvadX drawing office.

He starts his new career at EvadX later this year and the company has also enrolled him in a specialist training course at Stafford College.

EvadX Managing Director Simon Adams said: “It was great to have the pupils visit the EvadX factory. It has allowed them to appreciate the processes involved in the production of the steel frame.”

Assistant Head teacher of Ysgol Glan Clwyd John Evans added: “It was a fantastic opportunity for our pupils to experience the production of the steel frame.

“It is important for pupils to have an understanding of what is involved and visits such as this puts into perspective the work they do in lessons.”

Interestingly, Morgan will not be the first pupil from Ysgol Glan Clwyd to work  at EvadX, the company’s Quality Manager Robert Evans, previously went to the school.