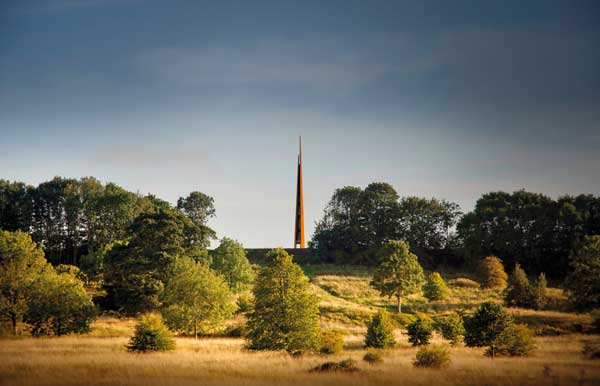 The International Bomber Command Centre is being created to provide a world-class facility to serve as a point for recognition, remembrance and reconciliation for Bomber Command.

The City of Lincoln has been chosen as the site for the IBCC as the county earned the title of Bomber County because it was the home of 27 operational bases during the Second World War.

At the heart of the IBBC is the Memorial Spire. Sitting majestically above the City of Lincoln, the weathering steel structure will act as a beacon marking the courage and bravery of those who served.

Designed by Place Architecture the architectural references are taken from the airframe and wings of an Avro Lancaster Bomber.

The structure represents two wing fragments tapering towards the sky separated by perforated plates similar to those used in the aircraft’s frame construction. 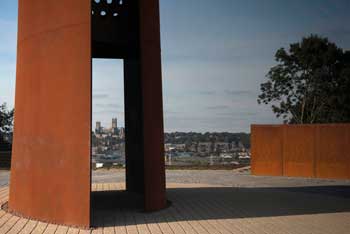 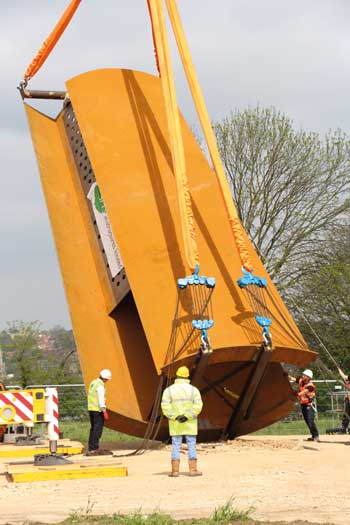 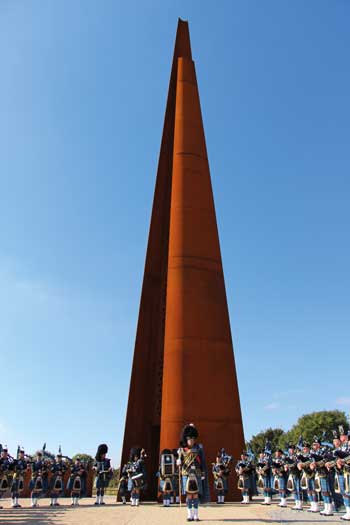 Further references can be found in the Spires dimensions; standing 31.9m high this represents the same span of a Lancaster’s wing and at 5m wide at its base is the same width of the aircraft’s wing.

“By using weathering steel we fulfilled the brief, but we also created a multi-layered sculpture that references flight, aircraft manufacture and is also a nod to nearby Lincoln Cathedral,” says Place Architecture Project Architect Stephen Palmer.

The Spire’s orientation was carefully considered and it is placed so that visitors who walk through it will be rewarded with a framed view of Lincoln Cathedral. The Cathedral Spire was very familiar to the aircrew as it was a welcoming familiar landmark to those who returned from their many sorties during the war.

S355J2W normalised rolled weathering steel plate fulfilled all the structural and aesthetic requirements of the project.

The first part of the manufacturing and fabrication process, performed by S H Structures, was to cut the individual plates from the stock material. Using the information generated by the computer model the plates were carefully nested to minimise the overall waste of material.

The external profiled plates had to be curved to form the wing-like form. Press-breaking the individual plates to the desired shape using files extracted from the 3D model achieved this.

The formed plates were built up in purpose-made jigs prior to being welded together to form the complete spire sections that would go to site as two loads.

“Due to the significant amount of welding, a great deal of care had to be put into the development of the weld procedure to ensure there was no distortion in the plates, particularly along their leading edges where any defects would be most noticeable on the finished spire,” says S H Structures Sales and Marketing Manager Tim Burton.

Before being delivered to site the steel sections were shot blasted, a process that ensured any fabrication marks were removed. This also allowed the structure to develop an even patina as the weathering steel gradually turned its familiar rusty colour.

Once on site, the spire sections, with a total weight of 55t were safely installed onto their holding down bolts, which were part of the foundations installed by local contractor Lindum Group.

The spire is surrounded by memorial walls that record the names of the 25,296 aircrew that lost their lives flying with Bomber Command, while serving in 1 and 5 Groups that were headquartered in Lincolnshire.

The walls, arranged around the Spire in concentric circles, are made from curved 20mm thick weathering steel plate. Welded onto these plates are 4mm thick steel panels with the airmen’s names laser cut into them.

“It is a great privilege to work on projects like this and contribute to what will undoubtedly become a lasting legacy to the memory of those who gave their lives serving in Bomber Command,” says Mr Burton.

“We were fortunate enough to be visited by one of the surviving veterans during our involvement in the scheme. Ex-Flight Lieutenant RAFVR Roy Hill arrived with his wife and daughter on the morning we were loading out the completed sections of the spire. Roy was kind enough to relate some of his experiences during his visit and it really brought home the significance of the project.”

International Bomber Command Centre Project Director Nicky Barr comments: “The Memorial Spire dominates the skyline as a fitting tribute to the efforts of all in Bomber Command, both those who lost their lives and those who survived.”

The judges say, this excellent project is a fitting testament to the memory of the World War II bomber crews that flew from Lincolnshire and other parts of the UK. The architectural arrangement of the various elements has been carefully considered, taking cues from the local context. The choice of weathering steel is most successful.