One of the largest sheds built in the UK has just been completed, fittingly enough a short distance away from the Corus steelworks at Scunthorpe. Jon Masters reports.

Independent retailers and wholesalers in their hundreds jointly own and use the services of buyer and distributor Nisa Today’s, gaining efficiency from their combined buying strength. So it seems appropriate that the organisation has made use of efficiencies that can be offered by steel construction, specifically a large portal frame structure, for its new headquarters.

At the heart of the new £30M development, at Foxhills Industrial Park near Scunthorpe, is a 56,000m² shed, designed, fabricated and erected by Atlas Ward Structures for Nisa Today’s’ Main Contractor Clugston Construction. Even though this is one of the largest sheds of its type in the UK, the period from design to completion of construction was a mere 12 months, including a 12 week steel erection programme. 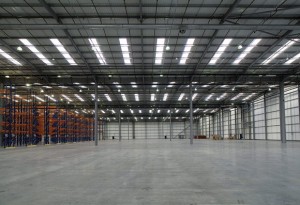 Design to completion of construction took only 12 months including 12 weeks for erection of 1,750t of steelwork 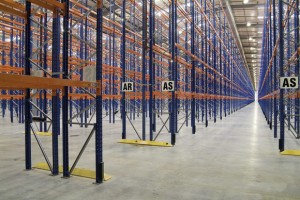 Design of the steel frame and fabrication of the 1750t of steelwork was carried out at Atlas Ward’s Sherburn offices and fabrication facility near Scarborough – one of 35 design and build shed projects completed by Atlas Ward this year. “It is fast track work,” says Atlas Ward Design Engineer John Taylor. “A few weeks after securing the order, we are commencing fabricating, so we have to ensure each project is designed quickly. The calculations are submitted to the main contractor for building control check and then we are straight into fabrication.”

The shed also has three two-storey composite decked office buildings attached – one at a gable end and one along each side. This gives Nisa Today’s over 60,000m² of new warehouse and office space, employing around 500 people and forming the new hub of the firm’s UK operation.

This essentially involves buying and distributing goods to its shareholding membership – independent retailers and wholesalers supplying local shops. Retail members belong to the Nisa arm of the business and wholesalers to Today’s. The organisation has 630 Nisa retail members operating some 5,000 shops, and around 330 Today’s wholesale companies.

Business is on the up for Nisa Today’s and the distribution sector in general, which is reflected in the continuing growth of steel shed construction. Atlas Ward Structures reports increased turnover and profits in the year that it became part of the Severfield-Rowen Group.

“We have had a very good year and current orders are strong, including various school and office design and build jobs as well as more shed work,” says Atlas Ward Project Manager Ian Hunton. “The Nisa Today’s project went very well. We have worked with Clugston Construction and their structural engineer WSP Group before, adopting a good professional approach that got the job finished on time.”