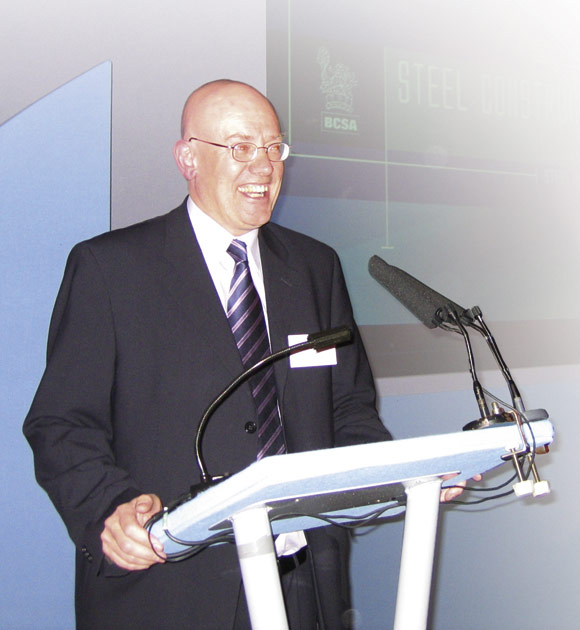 A strong and clear picture of a constructional steelwork industry in robust good health and confidently looking forward emerged from the 2005 Steel Construction Conference in London. Nick Barrett reports.

The conference theme was ‘The Way Ahead’, and the way was well signposted by a succession of case studies of successful projects ranging from steel’s traditional core business areas such as commercial developments, to new growth areas like multi storey residential and healthcare. Satisfied clients took the rostrum to describe how using constructional steelwork is allowing them to meet their highly demanding business objectives.

The way ahead is obviously going to be a sustainable one as this was a constant theme from successive speakers. Appropriately enough the BCSA Sustainability Charter was formally launched at the conference by Professor Roger Plank of the University of Sheffield (see News story click here). Good news was also heard on progress on preparing for the introduction of Eurocodes. A debate on the future construction market was introduced and chaired by John Humphrys of BBC Radio 4’s Today programme. Fairly steady growth of around 3% for the coming year was the forecast, he said

Sustainability featured in BCSA President Donal McCormack’s address, as he reaffirmed the steel sector’s commitment to achieving 100% recycling of steel, compared to the already creditable 90%. He looked forward to seeing the industry respond to the challenge of the London Olympics, with a total of 250,000t of steel predicted to be needed by Games related projects.

First up for the client side was Richard Elliott, Head of Construction with one of the UK’s biggest property companies, British Land, who stressed the growing importance of sustainability to large property companies. Achieving sustainability objectives was now embedded into every British Land development, ‘We have to prove the sustainability of our schemes,’ he said. British Land’s Sustainability Brief detailed steps that must be taken at every stage of a development to ensure that all sustainability issues are considered. For example, the construction team should consider setting a target for the percentage of the building that can be built from recycled materials. The reuse of materials has also to be considered, so bolting rather than welding of steel is preferred. Offsite fabrication is another area of preference.

‘Steel has obvious advantages,’ he said. Offsite fabrication meant a safer working environment, for example, as well as increasing productivity and reducing waste. Steel also allowed easy future modification of buildings to meet changing needs and reduces the need for wholesale redevelopment. It was no surprise then to hear Mr Elliott say: ‘The majority of our schemes use steel.’

Chairman of the morning session, Steel Construction Institute Chairman Peter Head, said changes in the planning system underpinned the importance of sustainability. It was now absolutely necessary due to legislative changes to be able to measure deliverables against targets in Local Development Frameworks. Launching the Sustainability Charter, Professor Plank said clients are demanding that sustainability be placed on the agenda. Advances like structural fire engineering, which reduces the materials needed for a building and was now being used on City of London projects, were examples of steel being able to work in a lean and more sustainable way.

The Swale Bridge was originally designed as a concrete box deck 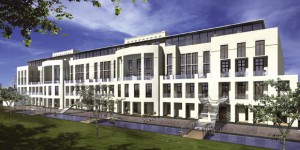 The debate on the future construction market, chaired by John Humphrys, who started with a review of the forecasts for the next two years, concluding that steady if unspectacular growth was on the cards. A lively debate involved questions from the floor fielded by a panel comprising Richard Elliott of British Land, Aaron Morby of Construction News, quantity surveyor Launce Morgan, and BCSA Deputy President Richard Barrett.

A delegate from the floor asked if there were any changes in the way construction projects were managed that would impact on the steel sector. Mr Elliott said Construction Management was still favoured by British Land, and under this procurement regime tenders would be sought from only one or two steelwork contractors. Selection would be based on their proposals, not just price. Richard Barrett said Partnering is still building momentum, and was preferable to the sealed bid tender approach.

Mr Humprhrys asked why clients did not involve the supply chain earlier in the project cycle. Mr Morgan said architects used to be relied on for specialist advice, but that advice was now elsewhere in the supply chain. Overall costs of using partnering approaches were no more than traditional ways of working, but administration and other costs could be higher with earlier involvement of the supply chain.

Mr Humphrys noted the large amount of smaller companies in construction; was consolidation coming? Mr Morby said it was common now to see major UK contractors owned by global companies. But overseas steelwork contractors who came into the UK market from time to time had not lasted the pace.

Richard Elliott saw little prospect of much consolidation, as the market for steelwork was often still a local market well served by local suppliers. Richard Barrett said the steelwork sector is fragmented all over the world. Economies of scale are not so pronounced as they are for other industries. Medium sized firms were both fleet of foot and happy to take the long term view. ‘The sector can deliver with the current set up,’ he said.

In the afternoon parallel sessions were held. One hall had seminars updating the position on Eurocodes for Buildings by BCSA Technical Director David Moore and for bridges by David McKenzie of Flint & Neil Partnership. Good progress had been made on both.

Case studies featured in another hall, starting with James Parson of Cass Hayward and Jeremy Sneddon of Fairfield Mabey who gave a joint presentation on Swale Bridge. The 92.5m main span structure is ahead of programme to finish in May 2006. Mr Parsons explained that the original design was a concrete box deck but this was rejected in favour of the more buildable steel design. Some 10,000t of permanent steel was used with 1,000t used for temporary works.

Alan Pottage of Severfield-Reeve Structures described the Blackburn Hospital, a design and build project in which 2,750t of steel was erected in 16 weeks to a framing plan from White Young Green. The National Health Service requirement for floor vibration response was easily achieved.

David Sands of Bourne Steel and Julian Simmonds, client for the ‘Eight Star’ Manresa Developments project to build up-market apartments in Chelsea, London, delivered a presentation on how they ‘raised the barrier of excellence’ to create what will be one of the most exclusive residential addresses in London (see NSC June 2005), with shell and core apartments costing up to £10M each.

Behind the 100m long retained façade are some of what have been called ‘the swankiest pads the capital has ever seen’, created using some 1,400t of structural steelwork. Mr Sands described how 22 pieces of steel were erected a day in a 100 day erection programme which finished one month early. Mr Simmonds, who put up his own capital to fund the project, described how he thought his personal presence on site enabled problems to be overcome quickly and promoted excellent on site relationships between all parties.

Mr Simmonds said using steel allowed the creation of large open plan spaces of 2,500 sq ft with no columns. ‘Using steel saved having four columns in each unit,’ he said. To the question would you do it again Mr Simmonds replied: “I would do it again. Undoubtedly, yes.”