The huge warehouse will create hundreds of new jobs

Due for completion in early 2010, Tesco’s huge Teesport distribution centre represents a massive investment which will create hundreds of jobs as well as delivering major environmental benefits.

Located on a brownfield site adjacent to the River Tees it incorporates a 30,000m², 39m tall high bay area and a 60,000m² low-bay storage zone, as well as a number of ancillary pods containing goods in/out, maintenance workshops and stair enclosures.

This huge distribution centre is being developed in response to the growth of Tesco’s non food business, such as electrical goods. Many of these are imported and will be fed into the company’s distribution cycle that supplies more than 2,000 UK stores. 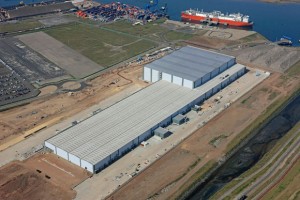 The distribution centre is located adjacent to the River Tees

Tesco Retail Operations Director David Platt said: “The benefits are twofold and cannot be underestimated in the current climate. This investment is good news for job-seekers and the environment.

“As well as creating more than 800 jobs, it also delivers major environmental benefits through development on brownfield land and, due to its location and on-site rail infrastructure, it will significantly reduce the number of lorries on the roads.”

The main steelwork package was completed by Atlas Ward Structures in an 11 week programme. Project Manager Andrew Bramley, says the main challenge was erecting steel at such heights in an open and exposed site.

“Based on our experience of numerous similarly sized structures the most important consideration is health and safety. To ensure this was achieved meetings took place with the main contractor to provide a special ground solution to facilitate plant working at such height and with the cladder to maintain temporary stability at all stages of the build.”

The warehouse’s high bay area is 151m long, has a maximum height of 39m and has five 42m spans. Running the length of the back elevation of the structure there is a 14m high, 31m span lean-to which also runs into the low bay section. This attached low bay area is 368m long, 14.5m high and has four 31m spans.

In conjunction with Atlas Ward Structures its Light Steel Division was responsible for the project’s stairs package, including the 36m high, high bay roof access. This meant both packages were designed and detailed in the same 3D model at the same time which generated benefits in cost and programme.