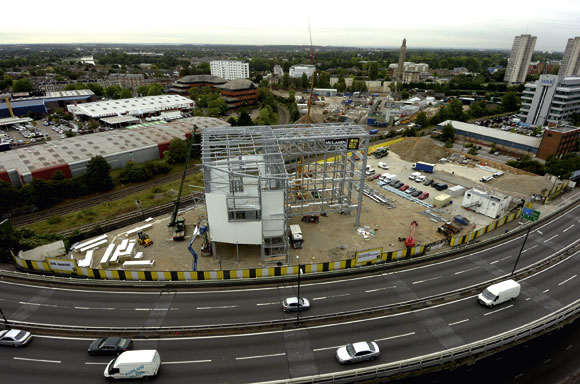 Adjacent to the M4, the building has a signature design to be seen by thousands of motorists every day

A steel frame has provided all the answers for a complex shaped storage facility in west London for Big Yellow. NSC reports.

Anew energy efficient, environmentally sustainable and innovatively designed storage facility is under construction for Big Yellow Self Storage alongside the M4 motorway in Chiswick, west London. Positioned on a prime site, seen by thousands of motorists every day, the design team for this job have seized the opportunity to produce an iconic steel framed structure using challenging engineering solutions.

Nigel Hartley, Construction Director for Big Yellow said: “The main challenge was to create a high quality building fitting for this prominent location, the design is striking and it will generate considerable interest once the building is completed in May next year.

Main contractor McLaren Construction took possession of the site during May. A Sotheby’s warehouse which formerly occupied most of the project’s footprint had already been demolished. McLaren firstly undertook a ground improvement programme and installed CFA piles with pile caps and ground beams, prior to structural steelwork erection beginning. 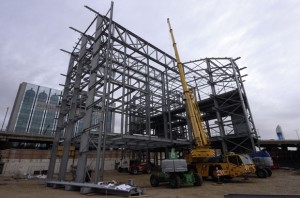 Mezzanine levels will be retro-fitted to the steel frame

The storage facility consists of six floors, with the majority constructed above a two-storey high service yard. The storage levels cantilever out on two sides of the structure, forming an architectural feature which will be highlighted by distinctive composite sheet cladding.

Attached to the six-level part of the building, the facility also comprises of a large two-storey segment which is roughly triangular in shape to fit the site constraints. The two-storey structure is a traditional portal framed building which will increase the project’s green credentials as it will be topped by a green/brown roof, which will alleviate rainwater run-off. The project’s other sustainable features include rainwater harvesting, storm water attenuation tanks and photovoltaic cells which will help provide some of the building’s energy requirements.

It was the requirement for a 25m × 25m ground floor clear span service yard for articulated trucks that drove the design for the main part of the storage facility.

“We’ve designed a number of storage units for Big Yellow and as they are usually portal frame structures steel is always the framing material of choice,” explains Andrew Frost, Campbell Reith Project Partner.

“This structure incorporates a portal frame, but the six-level part is very complex and the only economic way of constructing a building above a large service yard was by using steel.”

An innovative design solution for the structural bridge over the yard was required and the solution was to hang the steelwork from above, using roof top trusses to bear the load. “The roof space was vacant and was the ideal location for large trusses,” says Mr Frost. “The trusses also form the building’s distinctive barrel-vaulted roof.” 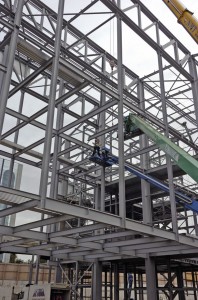 Large trusses support much of the steelwork from above

Supporting the steelwork from above are three 23m-long, 4m deep trusses, each weighing 20t. Each of these trusses were transported to site, by steelwork contractor Caunton Engineering, in one piece.

Once on site they were some of the first steel elements to be erected, and as they are by far the largest steel sections for this project, a 200t capacity crane was used to erect them. While this was proceeding, another mobile crane was used to position the intermediate bracings to tie them together. The trusses are supported on large 914 columns weighing 10t each, which are spliced at fifth floor level.

Caunton is erecting the structure’s main steel frame, this includes steelwork and metal decking for the second and fifth floors which are hung from the trusses. Mezzanine levels for floors three and four, and six and seven will be added later by Big Yellow as part of its fit-out programme. This has meant that the initial steelwork has had to be designed to accept extra mezzanine levels and their loads, and this is the reason for installing the large heavy columns.

“The final fit-out also includes the installation of staircases and lifts, which has meant we’ve had to leave openings in the second and fifth floors,” explains Gareth Skelton, Caunton Project Manager.

The trusses importance to the project are twofold as they also provide much of the structure’s overall stability, working along with perimeter bracing and bracing in stairwells.

“Steelwork has also provided flexibility to the project’s design as the fifth floor could be removed in the future if the client wanted a larger open space,” adds Mr Frost. “Another important point was that the second floor had to be shallow as we were restricted for headroom, this was also easily achievable with steel.”

Forming the feature cantilevers and also adding to the building’s overall stability are two large Vierendeel trusses. Located along two elevations, the 23m-long Vierendeel frameworks are formed from fully welded beams and columns, which were brought to site in separate pieces and then assembled on site.

“The Vierendeels are facetted and so they weren’t transportable as complete pieces,” explains Mr Skelton.

In order to erect the Vierendeel frameworks from which the the 4.7m cantilevers are hung, Caunton has had to erect temporary steelwork. This consists of three columns on either elevation, which are removed once the frameworks are erected and stabilised.

Steelwork erection has been sequenced with Caunton initially erecting the high-rise element in August and then returning during September to install the two-storey part. The lower part of the facility almost fills up one area of the site’s footprint, between the M4 and nearby railway lines. The cladding contractor would not have been able to get access to one of the higher elevations with a completed steel frame in the way, and so part of the steel frame had to wait until all of the cladding and glazing had been completed.

The Big Yellow Self Storage unit is due to open in May 2012. 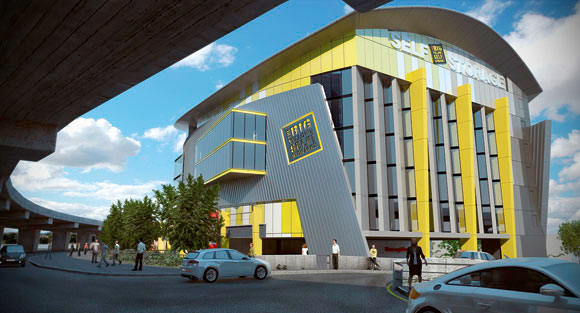