All change at London station 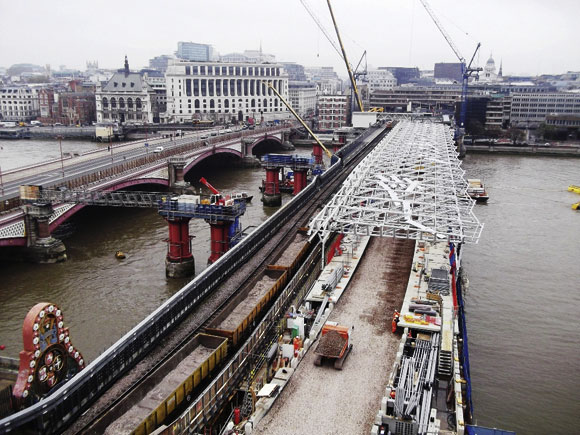 1. One half of the bridge is converted into a station, while the other half remains operational

Blackfriars Station fully re-opens early next year after the completion of a complex refurbishment programme. Martin Cooper reports on a project which has made full use of its river environment. 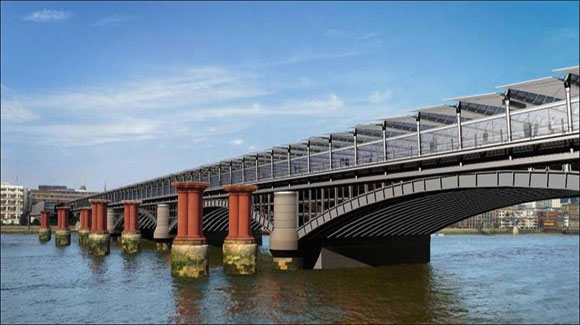 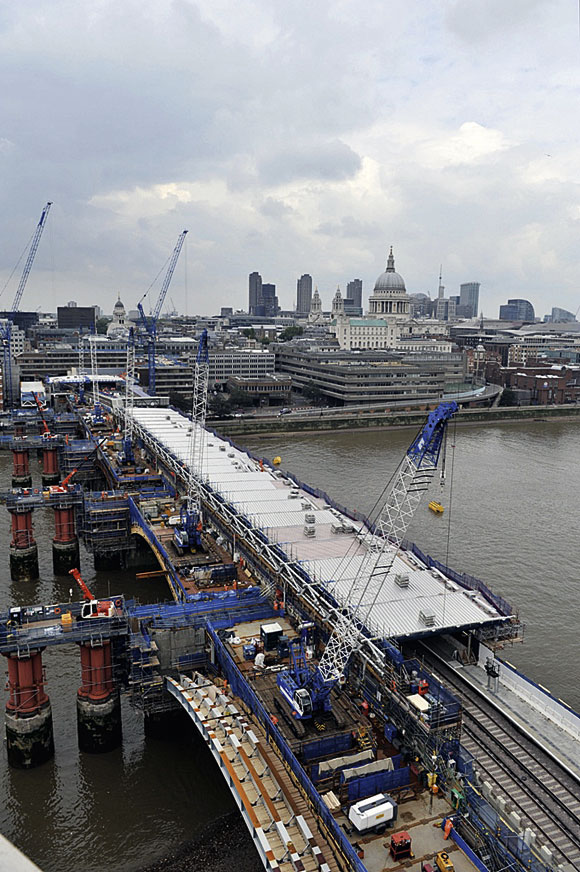 3. The station roof is supported on a series of vierendeel trusses 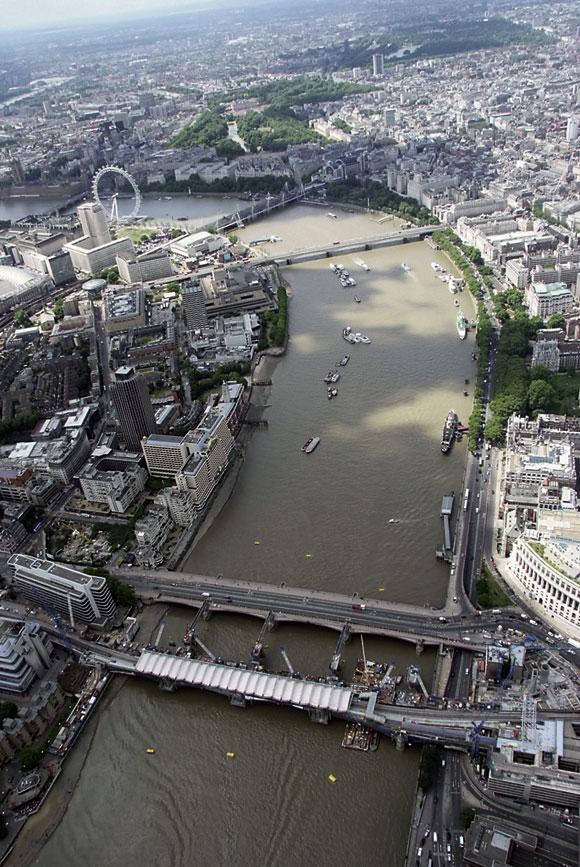 4. Spanning the River Thames, the station will be a London landmark 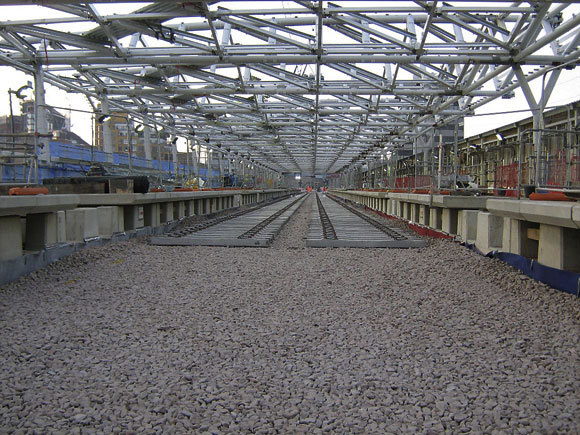 Straddling the River Thames on a fully renovated Victorian built bridge, the new Blackfriars Station will not only be the first station to span the capital’s waterway, but also the first to be built on the South Bank in more than 120 years.

Uniquely the station will have a new entrance and ticket hall on the southern bank of the Thames, supplementing the enlarged and rebuilt main entrance on the north side of the river. When complete next year, the station will no longer be a destination solely for commuters heading to the offices of The City, it will also offer passengers direct access to London’s cultural quarter on the South Bank.

The unlocking of central London’s rail capacity has also been one of the project’s main goals as the reconfigured and enlarged station will be able to accept up to 24 12-carriage trains per hour, compared to the shorter eight carriage trains currently operating.

“At present this is the largest rail project being undertaken in London,” says Steve Reucroft, Network Rail Senior Project Manager. “As part of the multi-million pound Thameslink programme the project will significantly improve journeys through the capital.”

This complex project has had a number of significant landmarks to date, the successful installation of a new steel composite bridge over Queen Victoria Street being one of the first. Completed over the 2009 Christmas period, this new bridge, which carries two Thameslink lines, which pass through the station (the other two rail lines coming from the south terminate at Blackfriars) has allowed the station to remain open to trains for most of the construction phase.

The 350t, 22m long bridge was assembled by Watson Steel, on six metre high trestles in a site compound adjacent to the project. During a 101 hour blockade, the old bridge section was carefully deconstructed and removed from its position between platform four and five at the north of the station by an 800t capacity mobile crane. Two hydraulic rams then slid into place the new bridge from its east side compound.

Importantly this installation also meant Network Rail could reconfigure the tracks at the station. The two Thameslink lines were moved to the completed eastern side of the main river bridge, allowing work to begin on the two terminating lines on the western side.

Work on the main bridge across the Thames, which involves widening and renovating the structure, is the project’s main steel element. Opened in 1886 for the recently completed Blackfriars Station (then known as St Paul’s Station) this structure, which stretches southwards from the station, partially accommodated platforms at its northern end. From next year however, the bridge will become the station, accommodating four new platforms to serve the four railway lines. The refurbished station bridge will have exits on both the north and south banks of the river and it will be roofed by one of the UK’s largest photovoltaic structures containing more than 9,000 cells.

In order to keep two rail lines open for the duration of the construction programme, the works have been scheduled around completing one half of the main river bridge at a time.

“Using steelwork for the bridge offered a number of benefits, not least the fact that the deck replacement could be done with prefabricated elements, which enabled the installation to be completed while half of the structure remained in use,” explains Anthony Westlake, Tony Gee & Partners’ Project Director.

Steel also offered an efficient option as the bridge’s piers are being reused and the new deck needed to be of a similar weight as the original wrought iron deck. Some strengthening has been carried out on the retained sections of the original bridge, as the new station will exert approximately 20% more load onto the substructure.

Much of this extra weight will derive from the roof. For this part of the job Watson Steel initially erected a central row of Y-shaped columns, supporting a spine beam, that in conjunction with a perimeter row of columns, hold a series of Vierendeel trusses. The roof trusses were brought to site in assembled sections, but to match the construction programme these were half a span wide.

However, prior to the roof sections going up the major works on strengthening and refurbishing the Victorian structure had to be completed. As the bridge will have to accommodate new platforms as well as the rail lines, the structure has been widened. This has required new arched ribs to be installed on both sides of the bridge, arches which will look similar to original Victorian ironwork arches.

Installing the ribs has been a logistical challenge, as the steel sections are brought to site by river and then erected by a combination of MEWPs and crawler cranes working from the existing bridge deck.

Each of the new ribs arrived in three 15m-long sections, each weighing 15t. In order to form new arches, the spans were fitted with temporary 16m long cantilever beams, 10m of which was attached to the existing deck. The protruding segment of these supporting beams were then used to hold the two outer pieces of the new arch while bracings were installed and finally the middle of the arch was bolted into place. Once the mid section was installed, the whole rib then acted as an arch thrusting against bearings at each end. On the western side the procedure was then repeated for the second and third arched ribs, using the same cantilever support beam.

The other major task on the bridge involving new structural steelwork is the deck replacement. The entire wrought iron deck has been replaced, allowing new platforms, ballast and railway lines to be installed. The task has been completed half a span at a time, so one half of the bridge remained open to regular train services.

All of the 500-plus new deck steel panels vary in size and are consequently all bespoke pieces (see box story). Typically they are 25mm thick plate, measure 5m × 3m and weigh in the region of between 8t and 10t.

“Each of the spans has to accommodate its own individual crawler crane, so the deck plates have been designed to accept the loads of this machine, as well as the loads which will be imposed during the bridge’s regular use,” explains Watson Steel Structures Contracts Manager Alan Blackhurst.

Deck replacement has now been completed and Watson Steel is currently completing the installation of the roof. The all new Blackfriars Station is due to open during Spring 2012.

River Thames takes the strain off the streets 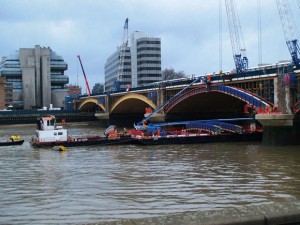 “River barges have been used to deliver and remove approximately 95% of all the materials for the Blackfriars Station project,” explains Network Rail Senior Project Manager Steve Reucroft. “This will ultimately take more than 2,000 lorry journeys off London streets.”

This sustainable strategy has included all of the structural steelwork used on the job. Main steelwork contractor Watson Steel Structures has made use of a fleet of barges to deliver the station’s new steelwork to site. From the company’s fabrication yard in Bolton, the steelwork is delivered by road to a purpose-built wharf near Blackwall in east London. From here the vessels are loaded up and then take about 75 minutes to reach the site, where they are unloaded by crawler cranes working off of the bridge deck.

Much of the steelwork is assembl-ed at the wharf prior to being loaded onto barges, and Watson Steel has also used this yard as a storage area.

“Because the new steel decks are all bespoke sections they have to be delivered to site in sequence,” explains Alan Blackhurst, Watson Steel Structures Contracts Manager. This delivery procedure is highly organised and has to take into account the tidal movements of the Thames.” 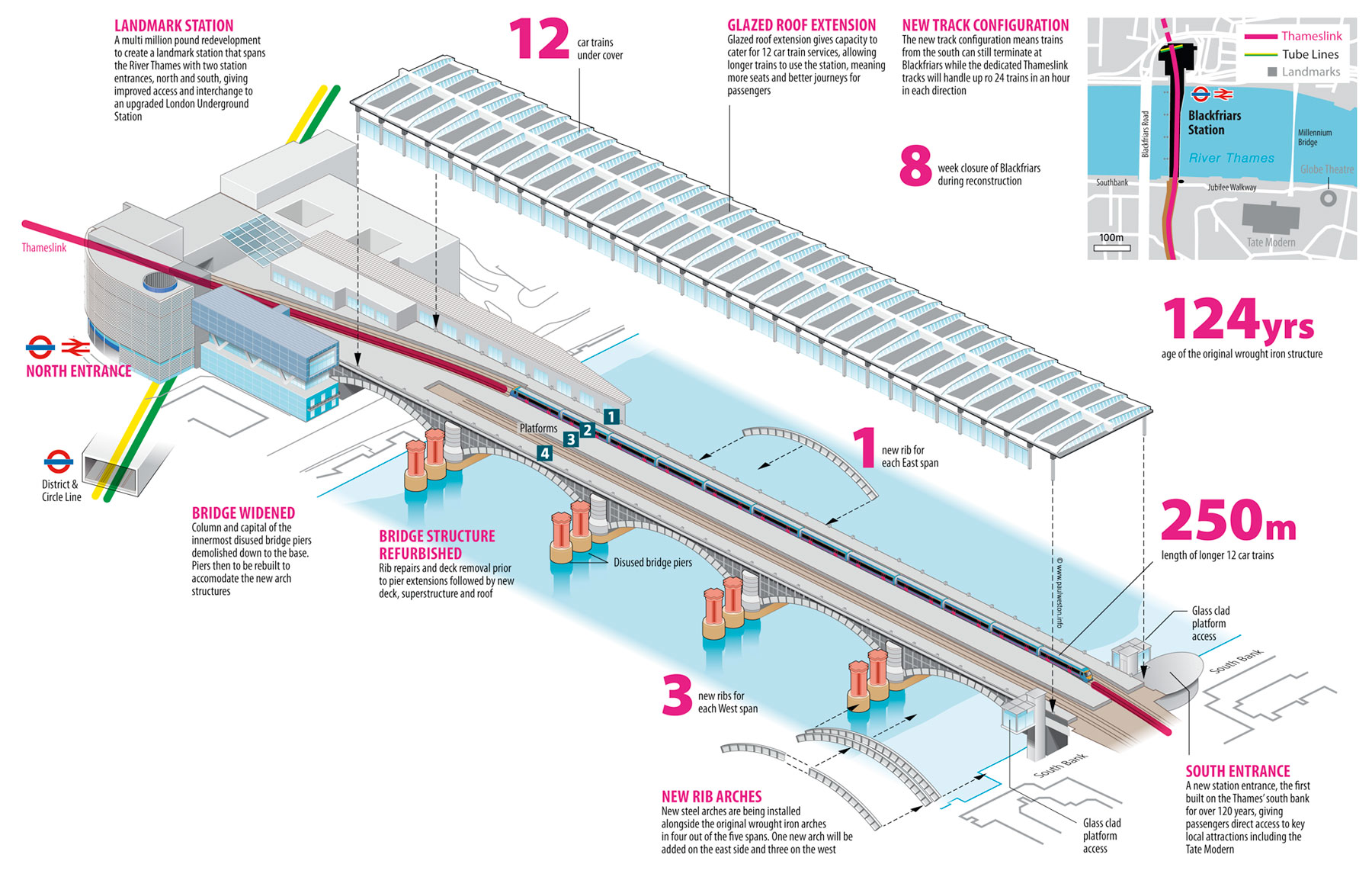 As well as the works being carried out over the Thames, steelwork is also playing an important role in the construction of Blackfriars’ two new station entrances, located on either side of the river.

Bourne Steel has fabricated, supplied and erected 900t of structural steelwork for the new entrance for Blackfriars overground and underground stations, situated on the north side of the River Thames. Known as the Common Entrance building, the structure is three-storeys high with a feature facade that is curved in plan. 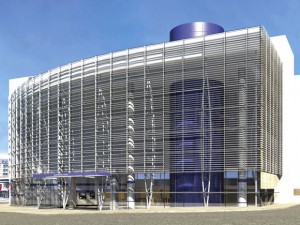 How the completed north entrance will look

Seven bowstring truss columns, supporting 82 transom members, form the fully glazed frontage to this building. The bowstrings are of ‘toblerone’ cross section appearance, tapering from a maximum 2m depth at midpoint. Each truss is 16.5m tall and weighs 2.5t.

“This meant that once the transom members had been erected and final alignment achieved, the principal connections were fully welded on site.”

Aiding access to the station’s underground platforms is a steel framed escalator building, which houses the associated equipment for the people movers. This structure is a steel framed ‘box’, 48m long by 10m wide and three storeys high. This steel box is supported on six V-shaped concrete filled fabricated plate columns and cantilevers up to 12m.

“This is only possible because the long sides of the structure have been designed as large trusses to resist the loads generated by the cantilevering structure,” adds Mr Rowell. 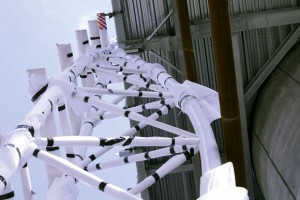 It has been constructed on a series of temporary props, as it will only be stable once the internal floors have been fully completed and all of the adjacent structures have been tied in.

Bourne Steel has also supplied steelwork for the new platform and concourse structures for the mainline railway station, as well as completing a raft of less visible works including strengthening and modifying the existing bridge, erecting cable support structures and supplying steel framed structures for inside new vent shafts.

Work on the north station area is now drawing to a close for Bourne Steel, however the company has commenced steelwork erection for the south entrance. Located only five minutes walk from its London offices, work on the South Bank entrance to Blackfriars Station involves erecting a steel framed building, installing five new staircases and building support structures to provide access up onto the platforms.