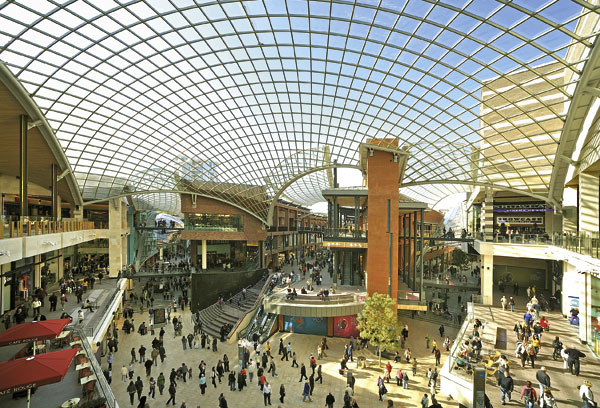 The Cabot Circus retail development incorporates free-form vaulted and shell shaped glass and steel roofs with a combined area of 5,850m². These stunning and eye-catching elements have been designed as a series of ten interlocking glazed undulating panels, spanning up to 55m in places.

Early in the design process the proposed roofs became divorced from the intended building elevations. This called for a complex geometry study and involved realigning of the roof geometry without compromising the artistic intent and achieving support from adjacent structures.

“Once we became involved in the project our brief was to turn the architect’s vision into something buildable, while maintaining a free-form fluid design for the roofs,” says Tim Roe, Technical Director at SKM anthony hunts.

There are ten roofs in total, the largest being the atrium which has a maximum span of 55m and an average span of 40m.

“The atrium roof is formed with a toroidal grid which has a high degree of repetition that provided significant fabrication benefits, particularly in controlling fabrication and erection tolerances,” says Mr Roe. 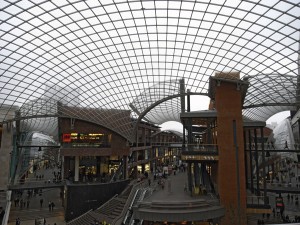 The grid was also chosen as it provides an aesthetic, practical and structurally economic solution. The other nine roofs in the development are all free form barrel vaulted structures.

A primary consideration in the roof design was the support performance provided by the buildings. Since each roof was supported by more than one independent building structure, the designs needed to accommodate differential building movements. This involved detailed consideration of the stiffness of the boundary condition, and the movements imposed by it, to evaluate the safe capacity of the arches and shells. Elastic supports were determined and then used in the calculation of all subsequent design forces, global capacities and support reactions.

The atrium roof was fabricated by cutting the tubular steel with square ends and then welding to precision machined solid nodes. The roofs were divided into transportable ‘ladder’ frames that were two bays wide and approximately ten bays long. The frames were made as large as possible to limit the amount of site welding and to reduce the number of deliveries.

These fabricated frames were craned onto a full birdcage scaffold covering the entire 2,000m² of the atrium. On completion of the internal grid, the 355mm diameter circular edge frame incorporating a 450mm wide walk-in gutter profile was positioned and securely supported on the scaffold.

The perimeter members were cut to length on site and welded between the internal grid and the boundary elements, giving tolerance provision. A number of surveys were carried out throughout the assembly of the roofs to ensure the roof nodes were kept within specified +/- 20mm tolerance for any node position.

Each roof was modelled using cutting edge 3D software and the lotting and nesting of the materials was carried out using this 3D model which significantly reduced waste material in fabrication. Waste was recycled to make jigs for future projects or used to manufacture any new sections of the structure.

In summary the judges say the design and execution is of a very high quality.