A nod to an engineer 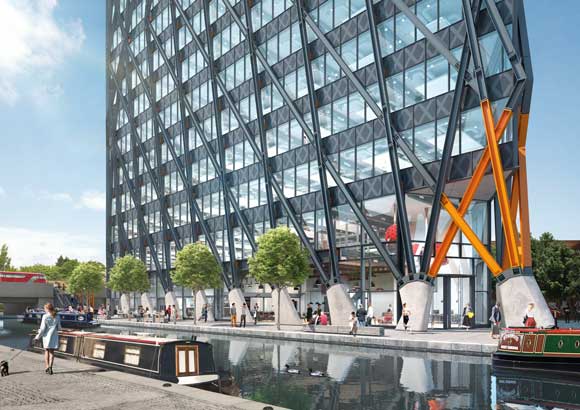 The building forms an important part of a new canalside development

Exposed steelwork is the order of the day for a new eye-catching commercial development in west London. Martin Cooper reports.

Named in honour of Isambard Kingdom Brunel, the Brunel Building would undoubtedly have delighted the famous engineer with its exposed engineered steelwork and multiple connections, which sits perfectly next to his giant iron-framed station shed.

Together with exposed steelwork, the industrial palette of the building also includes exposed concrete flooring and cores as well as service runs, accommodated within cellular beams, all left in full view.

The scheme has been in the offing for nearly 14 years, but finally started to come out of the ground last year once Laing O’Rourke had been awarded the contract by Derwent London.

The design had always envisaged a stand-out commercial building, one that would make people stop and look up, and that is exactly what is now being delivered. 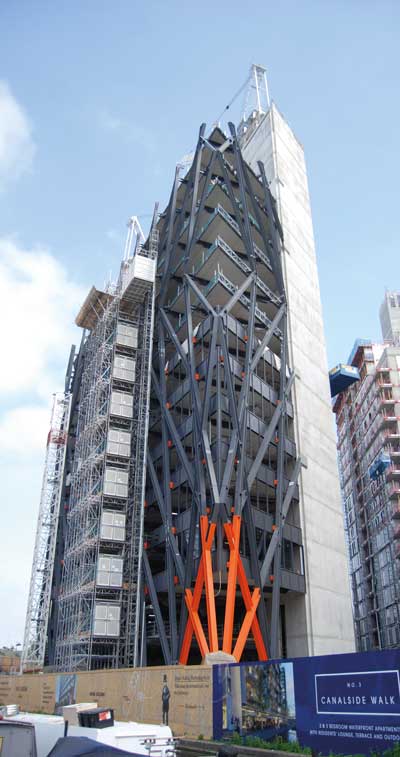 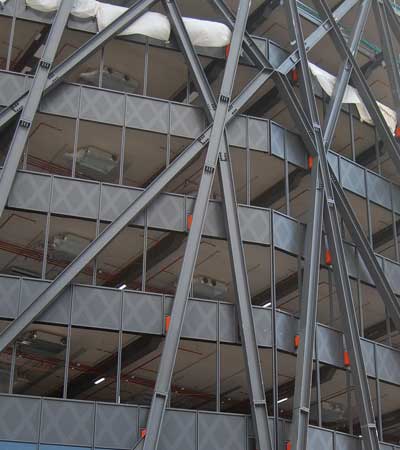 The skeleton’s nodes have up to seven beam connections 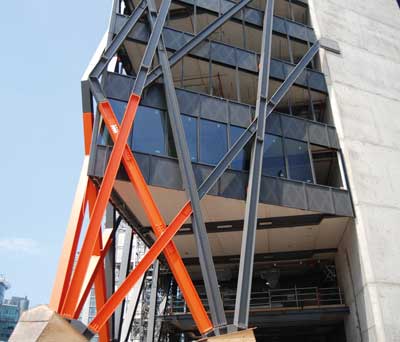 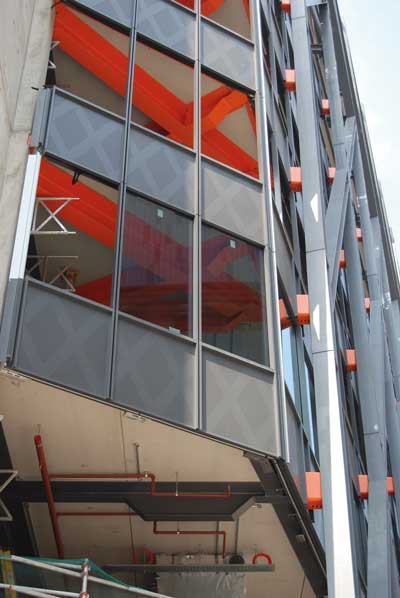 Topping out at 17-storeys high, the building’s most visually exciting component is its exoskeleton that sits in front of the cladding and allows the structure to have continuous glazing to all facades.

The glazing will offer the occupiers, especially those on higher floors, some spectacular views of London, while the exo-skeleton will provide solar shading.

The exoskeleton is a diagrid of steel beams that rakes out and then inclines back in at level nine as it wraps around the building’s four elevations. Connecting the skeleton’s beams are a series of nodes, that depending on their location, have up to seven beam connections.

The largest of the multiple nodes are generally 6m in diameter and weigh 2t, while the diagrid’s steelwork is a combination of UC sections and fabricated plate girders up to 17m in length.

The fabricated column sections that make up the exoskeleton have a common overall dimension of 350mm x 400mm, with flange and web thicknesses optimised to suit loads.

“The skeleton is an architectural feature as it supports vertical loads, but does not contribute to the overall lateral stability of the building as this is done by three cores,” explains Arup Engineer Steve Peet.

“There are longitudinal forces generated and these are taken back to the cores, but generally the less steep elements are all non-structural, acting as bracing while the steel is being erected.”

As the building splays outwards on plan, the eastern end of the structure has column-free spans of 6m, but this increases substantially to 18m-long clear spans, either side of the core at the western end.

“Because the steelwork is left exposed as a feature element, the cellular beams have bespoke ‘wishbone’ connections to the core and exoskeleton,” says Severfield Senior Project Manager Andy Luter.

‘They taper down from 650mm-deep sections to 350mm in order to minimise the penetration through the cladding as well as providing aesthetically pleasing steelwork.”

Architectural flourishes of bright orange are a feature adorning a number of areas within the building. The eastern elevation of the structure features orange-painted steel columns for the lower floors, highlighting the main entrance, while the ‘wishbone’ connections have all been retrofitted with an orange aluminium shroud that sits outside of the cladding, providing another stand-out feature.

Forming the floors of the building, the Fabsec cellular beams support precast panels, all of which have been installed by Severfield along with the steelwork. They have a highly architectural polished finish to their undersides as this part will be left exposed in the final scheme, while on top, a concrete topping is applied to form the floor.

Prior to the topping being applied the panels would ordinarily need to be propped as they would not be stable. However, on this scheme, most of the temporary props have been dispensed with as the panels have a steel torsional restraint which provides rigidity during the temporary state.

The restraint is a steel beam fixed to the underside of each panel, which is removed once the floor has been cast. Either end of the panel has a steel plate that connects to the adjoining panel, and these are cast-in and hidden from view once the floor is complete.

Severfield’s programme involved erecting three floors of steelwork before using the same tower cranes to install the concrete floor panels, by lifting them carefully down through the steel members.

The site’s two tower cranes are positioned in voids either side of the main central core and the two outer cores. These areas, which measure up to 8m-wide, will be infilled by Severfield during a return visit once the cranes are no longer needed and dismantled.

“Coordination has been key to the success of this project,” explains Laing O’Rourke Project Manager Craig Stokes. “Severfield has had to work closely with our offsite precast panel production to install the steel restraints prior to them being delivered to site.”

Steelwork starts at ground level and is founded on a concrete substructure encompassing a two-level basement. This has been formed by a combination of raft foundations, a secant wall up to 25m-deep and a concrete capping beam.

“The secant wall and the raft have to work in conjunction as in one corner of the building the proximity of the Bakerloo Underground Line meant no deep piles could be installed,” explains Mr Peet.

The Brunel Building is due to be completed during 2019. 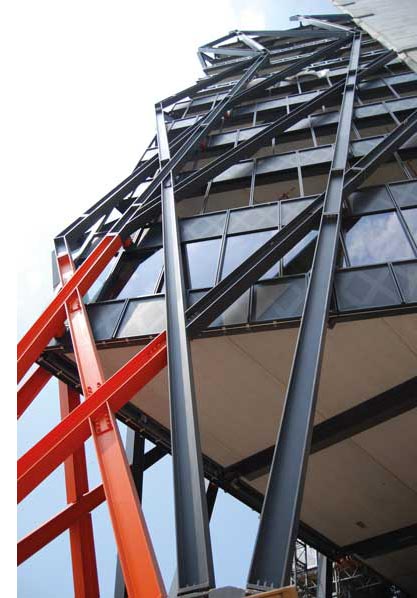 The Brunel Building adopts an exoskeleton. Richard Henderson of the SCI discusses the structure.

Exoskeletons are present in various creatures to support and protect the animal’s body. Examples are such insects as grasshoppers and crustaceans such as the lobster. Humans have an endoskeleton as do most buildings. Exceptions are described by Kathleen Villaluz [1] and include the Centre Pompidou (Paris) and the Hotel Arts (Barcelona). Placing the structure of the building externally allows large open spaces in the interior and using it to resist lateral loads maximises the lever-arm in the structure and therefore minimises the uplift forces due to overturning. A penalty is paid for this in the necessary penetrations through the building façade to allow the connections of the horizontal structure to the exoskeleton. Other building forms which employ the structure at the perimeter to resist lateral loads are the framed tube pioneered by Fazlur Khan in the 1960s (eg the Willis Tower, Chicago) and the braced tube (eg 30 St Mary Axe – colloquially, the Gherkin). In these buildings, although the lateral load resisting structure is on the perimeter, allowing the same generous open spaces in the interior, it is enclosed within the façade.

The exoskeleton of the Brunel Building is an architectural feature which supports vertical loads but does not resist lateral loads, thus not fully exploiting the available structure. The lateral stability of the building is provided by three substantial concrete cores. The absence of stiffeners in the connection details between the less-steeply inclined elements and the steeper ones in the exposed frame confirms that the forces in the former elements are not significant.