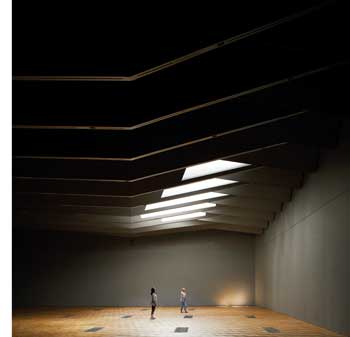 Known as the Exhibition Road Quarter, the steel-framed project consists of a new 1,100m² temporary exhibition space – The Sainsbury Gallery – and 1,500m² of art handling and conservation space all sitting underneath a new courtyard, entrance hall, 30-seat café and shop.

The large column-free subterranean spaces are formed by a series of steel roof trusses that also support a new courtyard public domain.

There are 13 triangular trusses which are orientated to point downwards towards the gallery floor so that from below the ceiling will appear as a series of peaks and troughs.

The 3m wide × 3m deep trusses measure up to 20m in length. In addition to supporting the roof and courtyard above, the trusses’ other main role is to prop the secant retaining walls at high level.

They span in a north-south direction between a series of fin-walls, which abut the secant piled wall adjacent to the existing Aston Webb building, and a large 40m long primary truss that bisects the gallery roof in an east-west direction.

On the opposite side of the primary truss a further space, including a mezzanine floor, is formed by a steel framework incorporating spans of up to 10m.