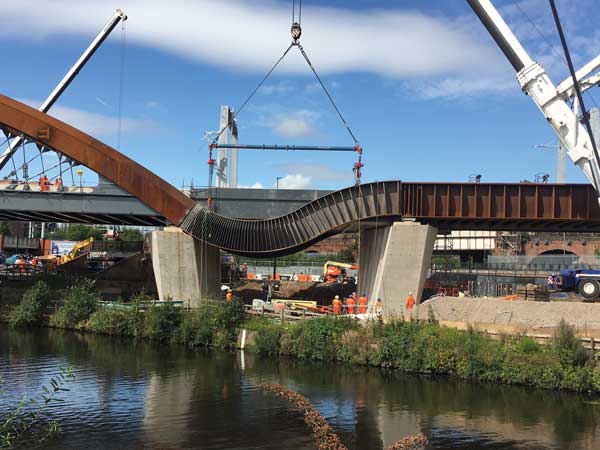 One of the final steel elements of Manchester’s Ordsall Chord, which will improve connectivity across the north of England, has been lifted into place.

A Programme Manager for Network Rail said: “The installation of the cascades completes the final and unique steel ribbon effect which runs along the outside of the bridge.

“We are a step closer to providing the infrastructure for more frequent trains and better connections, not only within the city but the north of England.”

BDP Transport Architect Peter Jenkins said: “The overall concept for the bridges is that of a continual, flowing ribbon which incorporates individual structures into a single over-arching identity.

“This latest piece of steelwork connects the River Irwell and Trinity Way bridges with a twisting, sinuous form which smoothly brings the concept of the structure to fruition.

“The process began with pen and paper concepts which were explored through structural analysis and developed into complex three-dimensional modelling.”

The cascades, along with a further 1,300t of steelwork for the project’s other bridges was fabricated and supplied by Severfield.