It is regrettable that the nineteenth century momentum for exploiting the aesthetic value of structural steelwork has to some extent declined. This is partly due to the need to reduce fire risks and maintenance costs and to technological developments in alternative materials. The early use of cast iron, and later wrought iron, produced some of the finest examples of clear structural thought combined with architectural quality. Subsequently these materials were superseded by or used in conjunction with steel and, from the mid-nineteenth century onwards, classic examples of unified steelwork and architecture emerge; notably Eiffel’s tower and the Machine Hall built for the Paris International Exhibition. 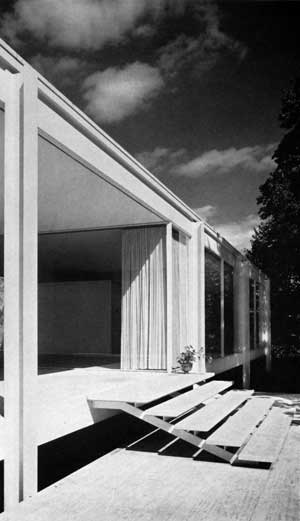 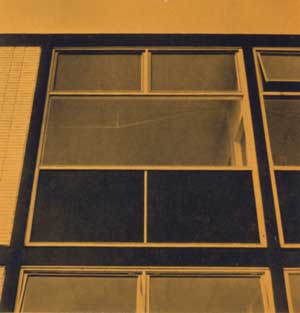 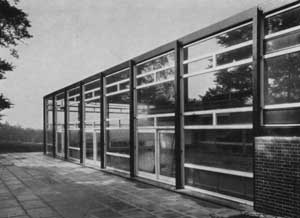 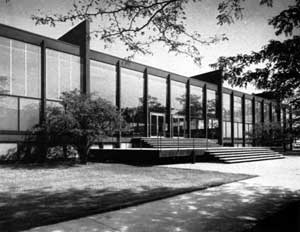 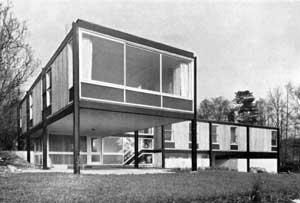 Since the turn of the century, however, apart from special purpose buildings and major long-span structures, the steel frame has tended to become more often concealed. This is inevitable with some buildings for the reasons already stated but it often seems to be forgotten that many types of building need not necessarily conceal their structural form.

It would perhaps be useful here to clarify the term ‘fair face steelwork’. The objective is to show that steelwork, when performing a purely structural function, may additionally be designed to make a major contribution to the architecture. It follows that exposed steelwork used as decoration in mullions, rails, or cladding does not fit this context.

Possibly the best known living exponent of fair face steelwork is Mies van der Rohe. The Farnsworth House is a very sophisticated example whereas the work at the Illinois Institute of Technology is more relevant to these arguments. It will be found that British examples of fair face steelwork in the purest sense are rare, although the post-war schools programme produced good light steel structures. Regrettably, however, many architects seem to have carefully designed out the structural frame. In many instances additional members, frames, mullion covers or casings have been needlessly added to conceal the structure, the paradox being that these components were often used to express the building architecturally.

In accepting the reasoning of the preceding paragraphs it is logical to consider any difficulties that may emerge in practice. A decision to design a framed building which integrates the qualities of the structure with the architecture makes essential early discussion with a sympathetic engineer or steel fabricator who understands the objective. The design process will be found to be more than simply assembling suitable sections – it will require meticulous care in three dimensional thought. In addition a greater precision of execution than normally demanded will be vital. Furthermore, the use of welding may be considered either from the point of view of weathering or assembly. It will be found, however, that economical bolted structures can be designed which, in themselves, present an opportunity for detailing which ultimately makes a worthwhile architecture. It is also essential to consider the choice of structural section most carefully. For instance, in horizontal members the existing tapered flanges make a useful weathering contribution. The welding of continuous angle drips, stops and waterbars presents no difficulty and may be economically achieved. The crucial point at the design stage, however, is to explore, three-dimensionally, all the junctions and weathering surfaces so as to translate crisply the basic design into reality.

Waterproofing or sealing site assembly joints may be simply accomplished with the use of lead shims placed between joints at the assembly stage. The use of fibre washers at bolted connections may also be considered advantageous. These design techniques demand most careful attention to eliminate maintenance problems. It is essential that all surfaces be adequately cleaned, preferably by shot-blasting. The use of a first-class paint is important, preceded by applications of zinc-rich paint or other self-protective media. The best treatment, however, consists of a sprayed zinc coating not less than 0.003 in. thick followed by a normal painting specification. Damage to the protective coating on site must be guarded against. Although experience shows that some damage is inevitable during erection. This may, however, be easily rectified by touching up on site with zinc-rich paint. Great attention must be paid to the termination of the external frame at ground level where it enters either plinths or casings, and here prevention of standing water is essential.

Apart from the architectural satisfaction that may be derived from fair face steelwork, the designer has a built in discipline and a design tool which may add considerably to the mobility of the surrounding cladding design. It is to be hoped that this form of skeletal design will commend itself more generally for appropriate buildings. The examples shown in the accompanying text are from recent buildings in the United Kingdom, together with Mies Van der Rohe’s American examples: Farnsworth House and Crown Hall, Illinois Institute of Technology, Chicago.