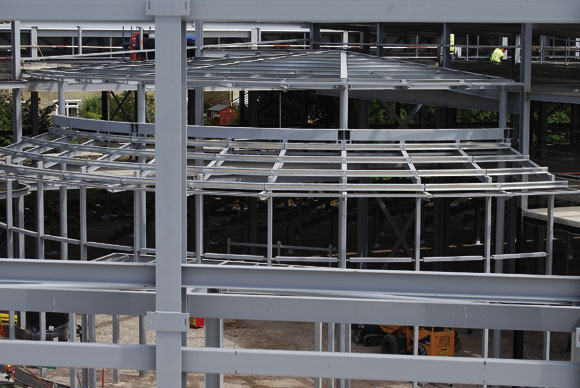 The curved entrance hall of the five screen cinema complex

The Oxfordshire market town of Witney is being transformed as a new retail and leisure development takes shape on a three hectare site formerly occupied by a car park and a local football ground.

Witney‘s local authority currently estimates that around 80% of local residents travel outside the district to do their shopping. Although not a large town, there is enough available space for development and the aim of the Marriotts Close project is to enhance the commercial vitality and viability of Witney town centre.

Another important consideration for the scheme is to preserve and enhance the historical character of the town centre. This has been largely achieved by restricting the new structure’s heights (five levels maximum) in keeping with the surrounding area and by designing the elevations to resemble individual structures.

Using various masonry and cladding materials will help break up long elevations and will lend the scheme a mock-Georgian feel. Also, by constructing three separate buildings the complex is open to the elements and resembles a traditional street.

The two retail blocks consist of a two-storey composite steelwork podium over which two floors of timber framed residential units will be built. 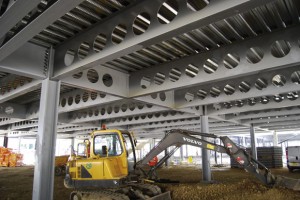 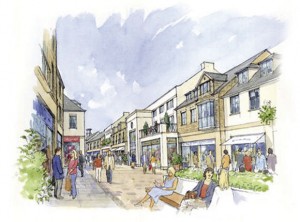 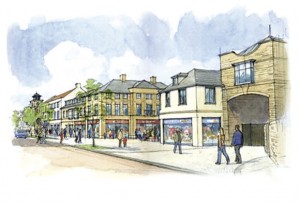 Another artist impression of the completed project streetscape

The need to reduce the weight on piled foundations was one of the reasons why steel was the choice for the main framing material, explains Dave Hurst, Associate Director of BWB Partnership. “Steelwork is obviously robust enough to support the timber framed residential blocks, while the scheme’s two anchor stores required long internal spans which is easiest with steel beams.”

The main retail and leisure section will require 1,100t of structural steelwork which Caunton Engineering is fabricating, supplying and erecting over a six month programme.

“The steelwork erection hasn’t been a continuous programme,” explains Caunton’s Contracts Manager Gareth Skelton. “We’ve actually erected one structure at a time and then returned to site once the ground was piled and ready for the next building.”

The two level cinema complex was the first structure to be erected on the project. The building houses five screens, all of a different size, while the second floor houses the plant areas and projector rooms.

“The cinema has a curved entrance area and this involved installing a lot of small sections,” says Mr Skelton. “Other than this the main challenge was to accommodate the necessary spans for the screens.”

The largest span in the cinema complex is 22m and the smallest is 8m. Metsec lightweight lattice trusses have been used throughout and these are all 1.5m deep.

As the cinema is situated at the back of the project and bounds nearby residential properties the need to keep this structure to a minimum height was essential.

“Structurally the biggest challenge was to keep the height of the cinema down while fitting five screens inside,” explains Mr Hurst.

Retail unit A is the largest building on the site with a total retail floorspace of 371m² over two levels. Marks & Spencer has taken the majority of this unit and the client’s wish to maximise floor to ceiling heights lead to cellular beams being used throughout the structure. Two levels of Fabsec beams with spans of up to 10m have been erected, totalling approximately 150t.

Unit A wraps around the new car park and forms one side of the project’s main entrance with retail unit B directly opposite. The cinema complex is situated at the end of the main thoroughfare, directly in front of the development’s entrance.

Retail unit B has a floorspace of 278m² and also consists of a two level steelwork podium with two floors of timber framed residential properties on top. Debenhams has taken the majority of this unit.

Stability for the three structures is derived from a combination of bracing and portal frames. “Because of the nature of the project we could only place bracing in certain areas, such as between cinema screens and shop walls,” says Mr Hurst. “In other areas we had to make use of portalised frames.”

Steelwork erection was completed on site at the end of August and the entire project is scheduled for completion by early 2009.