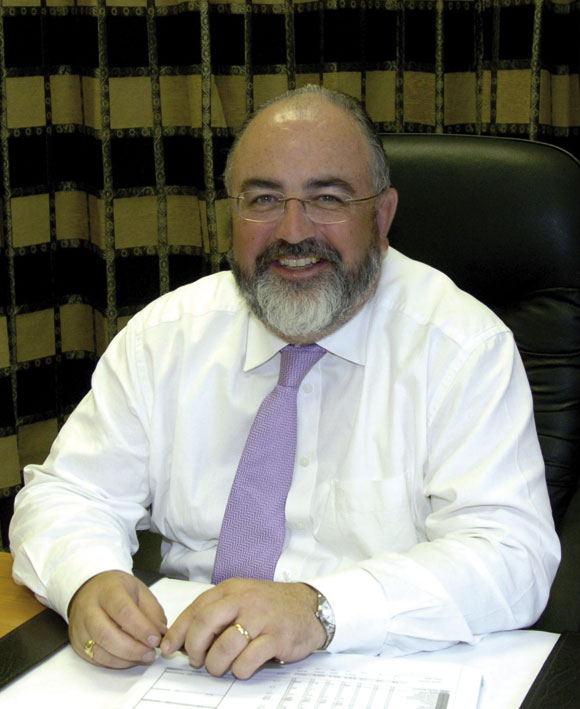 Andrew Mannion says the BCSA will provide a huge boost to the Irish steel construction sector.

A Wednesday evening in February and the Dublin football crowd is already streaming towards Croke Park for the night’s glamourous match against  Brazil. Since the completion of its redevelopment this 85,000 seat stadium, which now towers above all else in this inner city area, has become a city landmark. 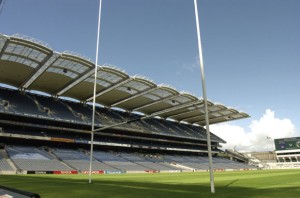 “This project was the turning point in AMSE’s history,” explains Andrew Mannion as he drives us past the stadium. “It was a major coup to get this large prestigious job and it made people sit up and take notice of us.”

Andrew Mannion is proud and justifiably so of the work AMSE successfully undertook on this project, fabricating and erecting one of the largest and most complex roof structures in Ireland with a span reaching a mighty 44m.

Up to this point in the company’s history it had concentrated on small to mid-sized projects which also contained a certain amount of complexity. From this point forward the scale and focus of the firm radically altered. “We’ve always prided ourselves on our design expertise and our ability to do complex projects, but we can now handle the larger jobs as well.”

Andrew is driving me through the evening rush hour traffic taking me from our interview rendez- vous, that afternoon at a city centre hotel, to a pres- entation at the Dublin Institute of Technology (DIT).

Once our interview had run its course he suggested I attend the presentation and on the way he would show me Croke Park. At the DIT he presented a new steel beam testing device to the college’s structural engineering department. The machine can test steel members with loads of up to 100t, the biggest piece of equipment of its kind in Ireland, and was fabricated by AMSE and then donated to the Institute.

Andrew graduated with a Diploma in Structural Engineering from the DIT in 1978 and says the donation is a good way of putting something back and helping the future generation of Irish engineers. 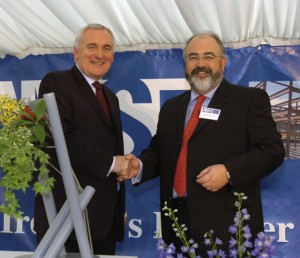 The last fifteen years or so have seen the emergence of the ‘Celtic Tiger’ economical boom, which has led to a huge upswing in construction activity. The upturn is based on high-tech and knowledge based industries with structural engineering at the sharp end.

After graduation he started his working career by spending three years at Collen Construction, in a position with responsibility for design, in both reinforced concrete and structural steel.

Becoming more interested in the design aspects of steel construction, his next job – from 1981 to 1984 – at Patrick Kelly & Co. involved technical as well as commercial duties. “Working here I picked up commercial skills which helped with setting up and running AMSE later in my career.”

Patrick Kelly was a subsidiary of Abbey plc and in 1984 the UK-based company decided to divest itself of all of its Irish assets. “They put all of their resources into housebuilding, which was good for the South East of England, but not for me,” he says wryly. “As I was left without a job.”

Thoughts turned to emigration but he says this ultimately wasn’t an option for family reasons. However, he swiftly found at new job with a small engineering works based in Athlone, which is pretty much slap bang in the middle of the island. A location which has more than grown on him.

After gaining even more valuable experience of all engineering functions including design and execution, moving to Athlone also proved to be rather fortuitous. In 1988 Andrew, purchased a burnt-out factory in the town. 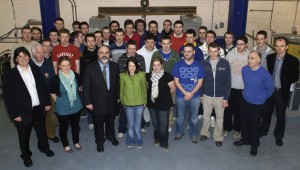 Andrew Mannion surrounded by staff and students of the DIT during the presentation and donation of a steel testing machine.

To cut a long story short Andrew went it alone and started his own steel fabrication company. After refurbishing the factory, installing equipment and hiring staff, Andrew Mannion Engineering began operations in 1988.

Andrew is Dublin born and bred but has now lived and worked in the Athlone area for more than 20 years. “It is a great location and being so central means we are ideally placed to deliver steel and work anywhere in Ireland,” he explains.

From an early stage he says the company wanted to offer the industry an alternative to large steel construction companies. “With my engineering expertise we decided to go for the small difficult jobs.”

The 1980s had not been kind to the Irish steel construction industry, and during the decade’s recession many fabricators had gone bust. Andrew Mannion Engineering entered the market just as things started to look up. Again some fortuitous timing was involved, but Andrew says he has simply just taken opportunities as they have presented themselves.

“Nothing has been too pre-planned, I’ve always had broad and achievable career aspirations and these have been achieved,” he adds.

The company’s phoenix-like rise from the factory ashes was well timed and the firm grew generically through the 1990s completing more than 1,300 projects, right across the board, by the end of the decade.

Since completing the Croke Park project AMSE has gone from strength to strength and Andrew says its design department is unrivalled in Ireland.

As the firm was now at the forefront of the Irish steel construction industry Andrew’s thoughts turned to how he could improve the local sector. “I initially became aware of the BCSA by seeing and  using the NSSS Black Book.”

He says the BCSA gives excellent technical advice and assistance and joining could only help the Irish construction market.

“There has never been so much steel construction activity in Ireland, we’ve experienced
10% to 15% growth per annum in the last 10 years,”  says Andrew. “This growth has been right across the board and I encouraged other Irish steelwork contractors to join the BCSA as a way of helping the sector mature, because of all this activity.”

A total of nine Irish steelwork contractors, which represented the nation’s leading steel firms, were initially offered a year’s BCSA trial membership. Once this was completed the entire block joined to form the Ireland Region.

Andrew concludes that through seminars and publications more local consultants will be educated and informed about the advantages of steel construction. “The parameters of cost compared to concrete may be slightly different here from the UK, but steel is still the right material for many many projects.”