Taxis in the frame 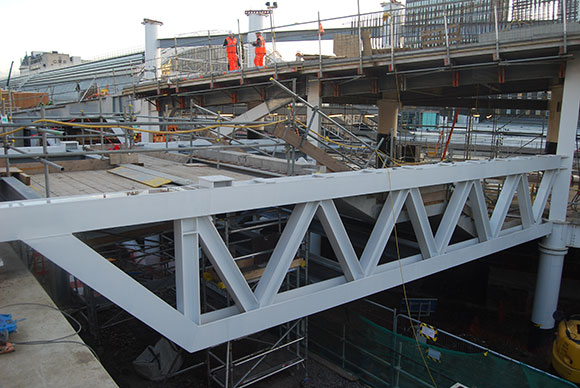 Steelwork is playing a significant role in the works currently being undertaken at Paddington Station, a project which is creating the space for the forthcoming Crossrail scheme. Martin Cooper reports.

Main client: Crossrail
Architect: Weston Williamson
Main contractor: Carillion
Structural engineer: Mott MacDonald
Steelwork contractor: Rowecord Engineering
Steel tonnage: 1,100t
Arriving or departing from London’s Paddington Station by train passengers will have noticed the steelwork frame taking shape alongside the Hammersmith & City Underground lines to the north of the historic terminus. These works may not initially look very substantial, but they are in fact the precursor for the Crossrail project and vital to its forthcoming construction programme. 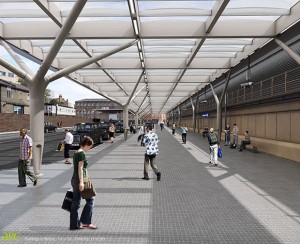 Known as the Paddington Integrated Project (PIP), the job will deliver a new Hammersmith & City line station and entrance, improved access into the mainline terminus, and importantly a brand new taxi facility and ramp from Bishops Bridge Road. The new taxi area to the east of the existing station will have access to the terminus via lifts and escalators, but most importantly its completion will allow taxis to relocate from their current pick-up area on Departures Road.

This is vital as the current taxi facility’s area has been earmarked for the new Crossrail station, which will run alongside the western facade of Paddington Station.

“The main Crossrail works can’t start until the taxi area has been moved, so it is important that we complete our project on schedule,” says Andy Swift, Carillion Project Manager for the PIP. “As soon as the taxis have moved excavation work will start on the new Crossrail station.”

When it opens in 2018, Crossrail will run 118km from Maidenhead and Heathrow in the west, through new twin-bore 21km-long tunnels under central London to Shenfield and Abbey Wood in the east.

It is the largest expansion of the south east’s rail network in fifty years and probably the decade’s biggest construction job in the capital. Paddington will be a major interchange between the new Crossrail lines, Network Rail and London Underground services, so there are a number of stakeholders and much riding on construction keeping to a deadline.

As the PIP scheme is a vital cog in the overall Paddington programme, it is a collaboration between Crossrail, London Underground, Network Rail and Transport for London. The works have been designed to create an enhanced interchange, but delivering it has many challenges. 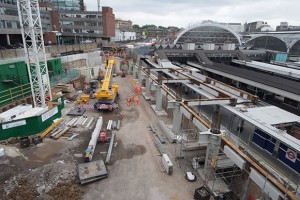 The new steel framed structure, which comprises of a new north entrance, a double-storey concourse situated above the Hammersmith & City lines, and a taxi ramp, which connects to Bishops Bridge Road at one end and the new taxi pick-up area at the other (see story below), is wedged into a tight triangular site bounded by Paddington Station, the Grand Union Canal and an array of roads, offices and residential blocks.

As a lot of the steelwork is being erected above ‘live’ railway lines much of the work has had to be done during three hour windows between 1am and 4am, as well as the occasional weekend and Bank Holiday closure.

Having such a short period in which to erect its steel, contractor Rowecord Engineering says this job has taken longer than a project requiring 1,100t would normally. But the timescale is not the only challenge they face as Operations Director Ian Hoppe explains: “As there’s no storage space most of our deliveries are made at night and then erected almost immediately. Night time work also means there are onerous noise restrictions in place which means tasks such as welding and cutting are left until day time.”

Rowecord’s steel package has included an assortment of sections and sizes, as the job requires a raft of differing members. The concourse and entrance building are formed with large concrete filled tubular columns, trusses have been installed across the rail lines and above the taxi ramp, complicated tree columns have been designed for the platform and taxi area’s roof and new steelwork has been connected to old existing steelwork in some areas.

Interestingly, the structure is the first phase of this development, plans are afoot to build a 17-storey commercial block on top. This ‘over-site’ development was always in the plans and so the steelwork has been designed to sustain the proposed offices. The offices will be built above the taxi ramp and the North Entrance (excluding the concourse), in short the portion which is not directly above railway lines. 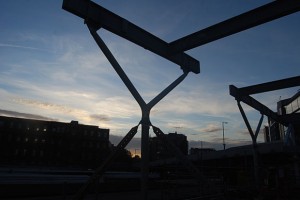 To facilitate the future commercial development, the steel frame has a demountable roof in places, which can be unbolted, something that is easily done with structural steelwork, in readiness for the second phase of steelwork to be added.

“We are using significantly larger member sizes than we’d otherwise need because of the proposed offices on top of the structure,” explains Chris Levy, Mott MacDonald Project Engineer. “The supporting tubular columns have been concrete filled because of the extra loads they will support and for fire protection.”

Fitting the steel frame into its wedge-shaped footprint and because of the three differing elements within the structure, it gets its stability from a number of sources. It has transversal moment frames, longitudinal cross bracing and a steel framed lift core.

The confined nature of the site has also meant steelwork has been delivered piece-small, so it could be lifted into place via a tower crane. “Early in the works, when there was a little more space we were able to get a mobile crane on site,” adds Mr Swift. “But as the job has progressed the footprint has been taken up by the steel frame.”

The new taxi deck is due to be ready this Spring, while the new entrance and concourse is scheduled to open later this year. 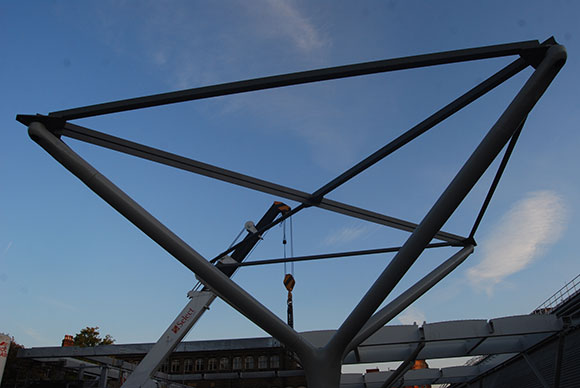 Key to the project

Relocating the taxi pick-up area from Paddington Station’s western side to a new facility will enable the new Crossrail station to proceed as planned. The current taxi concourse at Eastbourne Terrace and Departures Road will be excavated to form a 230m-long underground station box about 23m below the surface. This work can only commence when the new taxi deck on the eastern side is ready.

Taxis will enter the new area from Bishops Bridge Road via a new ramp, which is integrated within the new North Entrance and station concourse structure. They will then proceed to a new taxi deck adjacent to the station and above platform 12. This steel deck was constructed in the 1930s as a mail and parcel zone, and the original steelwork has survived in good condition. Openings have been cut into it for lifts and stairs, and in these areas new steelwork frames have been welded to the old riveted metalwork.

A series of 22 steel tree columns, with two and four branches, will support the taxi deck’s roof. These columns have complicated castings, designed by Rowecord, and are being brought to site in sections before being welded up and erected. They are welded and connected to the deck’s original steelwork and immediately propped for stability. Only when the glazed roof’s connecting secondary steel has been installed are the trees able to be de-propped.