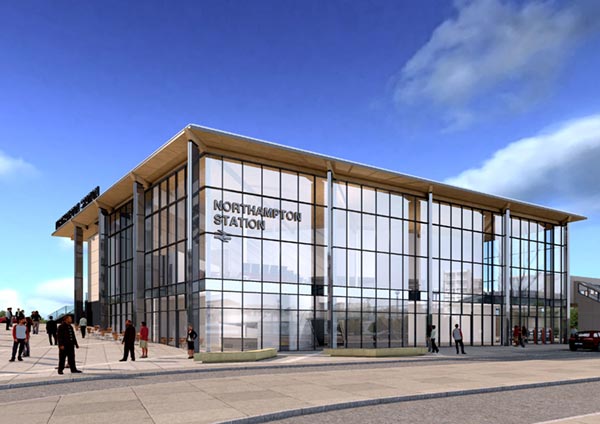 The new station will be a cornerstone for future regeneration

To help achieve its aspirations the Northampton Waterside Enterprise Zone, which encompasses more than 20 sites along the River Nene, has been set up. It aims to regenerate a range of brownfield areas, industrial estates and expanding sports stadium sites throughout the town.

One of the Zone’s key projects is a new £20M railway station built adjacent to the old station.

The new 2,500m² building opened in August and  is twice the size of the old station, offering more capacity and improved facilities.

Commenting on the station, Councillor David Mackintosh, Leader of Northampton Borough Council, said: “At last we have a railway station worthy of the town. As a key gateway to the Enterprise Zone, this will be a facility we can be proud of and will present a fitting welcome for visitors.” 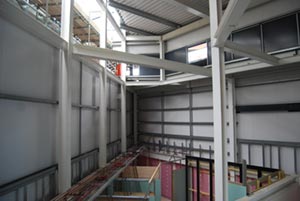 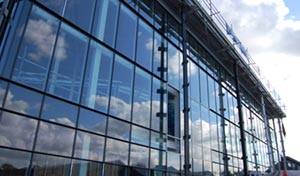 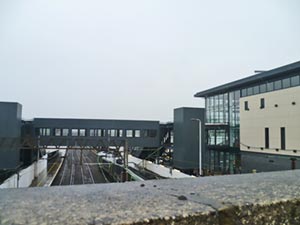 The new footbridge was the first steel to be erected 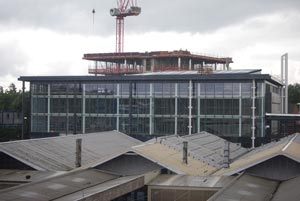 The old station buildings, in the foreground, are now being demolished

Having completed the new station, main contractor Buckingham Group Contracting is now demolishing the old station building, which will then allow this land to be used for a new taxi rank and drop off zone.

Buckingham Group started on site in March 2013 and initially had to temporarily relocate the existing station’s taxi rank, which cleared the space for the new building to be constructed.

Soon after work started a three-month archaeological dig commenced as the site is of historical importance (see box) and this was the first time such research had ever been able to be undertaken.

Once the archaeologists had finished, 12m-long CFA piles were installed. The existing footbridge over the station’s platforms was then demolished and a temporary structure, complete with lifts, installed.

The first steel erection to be completed on the scheme was the replacement footbridge on the same footprint as the old structure.

Brought to site in two 9m-long pre-assembled sections, the entire footbridge, along with its two support towers and stairs, was installed by a 500t capacity mobile crane during a two-day rail possession during the Christmas holidays.

Meanwhile, Billington Structures had commenced the erection of the new three level station building using a single 50t capacity mobile crane for all of its lifting duties.

“The project was always going to be a steel framed structure for efficiency,” says Rob Hazell, Jacobs Project Engineer. “The main challenge was fitting the station into its footprint which is bounded by railway lines and a main road on two elevations. This resulted in the building’s rhomboid shape and the irregular grid pattern of the steelwork.”

Long clear spans for the entrance and concourse areas were also an important consideration and another reason for using steel.

The ground floor of the building accommodates the main entrance from the drop off point and taxi rank, back-of-house facilities, ticket machines, retail zones all arranged around a 15m wide foyer.

Lifts and a main staircase give access up to the first floor, which contains another entrance from the adjacent road bridge, the main ticket office, more retail outlets, and access to all five platforms via the new footbridge and gateline.

Above this, a second floor covers only a quarter of the building’s overall footprint accommodating staff rooms and offices.

“The design for the station and bridge is steel-framed for its speed of construction,” says Andy Latham, Buckingham Group Project Manager. “The bridge was brought to site in prefabricated sections, while the main building was erected quickly as no sections needed to be longer than 15m which allowed a fast programme.”

Externally the station features a 16m-high totem that signposts the station, as well as a 2m wide canopy that extends around all four elevations. Three of the façades feature full height glazing, with the exception of the elevation along the main road which is clad with granite tiles.

“The glazed façades are unrestrained with stability are derived from the frame’s braced bays,” adds Mr Hazell. “In other areas the steelwork is designed as a sway frame.”

The station project, including all remaining demolition work and associated landscaping is due to be completed by February 2015.

The site of the new station building was once Northampton Castle. Before falling into disrepair in the Tudor period, this Norman Castle had been one of England’s most strategic as it was the first major castle a day’s ride north of London.

In 1861 the Castle and the surrounding land was sold to the L&NW Railway Company, who levelled what was left of the stone-built fortified walls, in order to construct the first Northampton station.

Early last year an extensive archaeological dig was undertaken and a number of significant finds, including Saxon broaches, medieval pottery and Victorian tiles from the first station were unearthed.

Andy Chapman from Northampton Archaeology says: “This was a rare chance to learn about the Castle and the findings have helped to paint a picture of how people lived and worked over 1,000 years ago.”