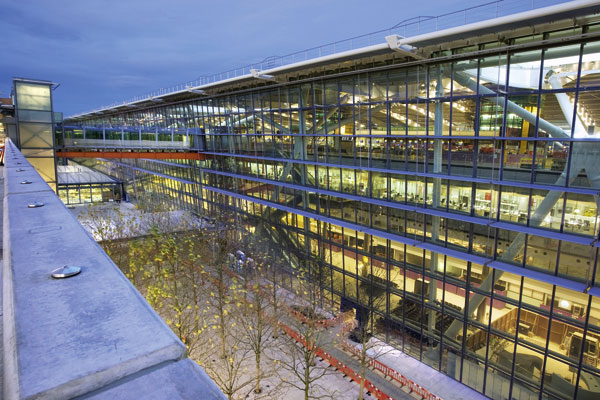 Terminal 5 will handle approximately 30 million passengers per annum and makes a significant statement on the world travel scene.

The design of Heathrow Terminal 5 was a direct reaction to BAA’s desire to create a building that would be an aviation landmark and could adapt over time to the ever-changing requirements of the industry. The building does not force itself onto the local community, it sits low in its surroundings and only brief glimpses are possible from outside the airport. .

The structure’s single span roof provides a coherent building envelope while remaining independent of the building’s internal superstructure. The roof soars 156m from the east side of the building to the west creating two separate ‘canyons’ each of which responds to the structure’s functions.

It is supported by 22 pairs of 914mm diameter steel legs that reach down to apron level in dramatic full-height ‘canyons’ just inside the facades. The roof arch is formed from steel box girders at 18m centres: 800mm wide and up to 3.8m deep. 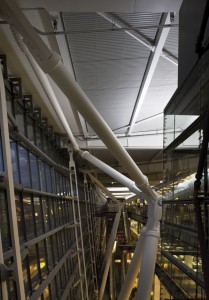 These are tied at high level by pairs of 115mm diameter prestressed steel cables, while 914mm diameter steel arms reach up from the tops of the legs to support the rafters, and solid steel tie-down straps from the rafter ends complete the 3D hybrid portal frame structure.

The roof, as it is independent from the building’s superstructure, provides for a fully flexible and adaptable internal space. The scale of the roof’s structural components clearly pointed to the use of steel as a way of creating the simple, independent building enclosure. Building movements and deflections for this type of span suggested that only steel construction would be suited.

Efficiency of design, fabrication and steel erection was aided by Watson Steel Structures providing large pre-fabricated units, up to 55t each that were bolted together at low level to form the central section of the roof.

The central arched section of each phase of the roof build was assembled, clad and prestressed at ground level and was then strand jacked 30m vertically into position and bolted to the abutment steel.

Once each phase was complete the temporary works frames that had been used to assemble the abutments were rolled north by 54m ready for the next phase. Prior to the work commencing on site a full sized trial erection was conducted to refine the fabrication and increase efficiency.

All aspects of the roof were planned and designed to maximise safety and minimise site risk. As much work as possible was carried out off site or at low level, including the steel nodes which are made from pieces of steel plate that were flame cut to shape and slotted together. This avoided site welding and allowed a speedy fit up on site.