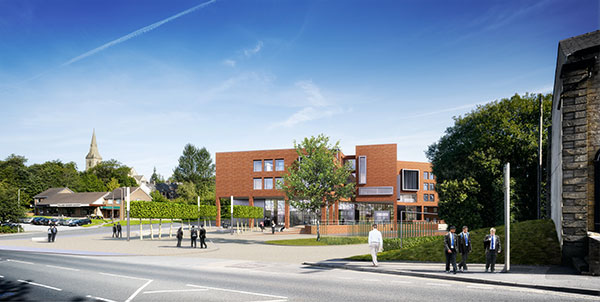 Artist's impression of Waterhead Academy, the largest of the three academies currently being built in Oldham

As part of the Academies framework, three new steel framed schools are taking shape in Oldham. Here NSC reports on the progress of each.

At its peak in the early part of the 20th Century Oldham was the most productive cotton spinning town in the world, with its 350 mills churning out more product than many western European nations.

The town also led the way in the design and manufacture of spinning and weaving machinery, but it was so dependent on the cotton sector that when the former began its inextricable decline, this industry took a downswing as well. Oldham’s last mill ceased operation in 1998, and today although many of these buildings remain, they have been converted to other uses.

In the meantime, like many former industrial towns, Oldham has had to reinvent itself, and ever since the negative publicity it received following the 2001 riots it has been trying to highlight some of its positive characteristics.

This is where three new schools fall into the equation, as one will have a massive impact on the local community by aiding the integration of various communities.

Two of the schools are on former mill sites and on a design perspective, all of the projects are making use of structural steelwork for their main frames, a decision made for a number of reasons, but primarily for the speed with which it can be erected.

“On all of the jobs getting the frames up quickly and then weather tight was important,” says Martin Griggs, GCM Consulting Project Engineer. “Once that’s achieved and the composite floors are in, the fit-out can begin and the external skin can be installed.”

The schools are all different and steel has helped overcome unique challenges on each project.

Client: Oldham Council
Architect: Aedas
Main contractor: Willmott Dixon
Structural engineer: GCM Consulting
Steelwork contractor: James Killelea
Steel tonnage: 1,000t
Project value: £26.3M
Waterhead Academy is the largest of the three academies Willmott Dixon is currently building in Oldham. What is significant about this school is that it will replace two existing  schools, one where the pupils are 98% white, the other 98% Asian, and thereby bringing the town’s disparate young communities together under one roof.

Building the academy has thrown up a few challenges as Willmott Dixon Project Director Mike Lane explains: “It’s a tight former mill site and within its confines we’ve had to support an adjacent highway, grout three disused mineshafts and avoid building near a culvert which runs across the plot.”

Meanwhile, the six-storey school, which is sponsored by Oldham College, will have a 12,800m² footprint and unusually a 150 space car park located beneath the building in an undercroft.

“Using a steel frame has had a number of advantages for this job,” says Mr Lane. “By putting the car park underneath we’ve not had to change the structure’s design, it’s basically just been jacked-up on steel columns to accommodate the undercroft.”

Mr Griggs agrees and says: “By avoiding a basement structure and forming an undercroft with the steel frame was cheaper as no tanking was required for waterproofing.”

As with most schools Warerhead’s design has had to incorporate a number of differing uses and classroom sizes, consequently in many areas of the structure there is very little repetition.

“Steel certainly helped with this complicated design as it has a number of different shaped and sized grids,” adds Mr Lane.

The car park is based on a 7m x 15m grid, a standard pattern for car parks, but above this grid patterns change and many columns do not ‘match up’ between the undercroft and the main school building. Transfer structures (deeper beams) are located throughout the structure to accommodate these column variations.

A feature of the school structure is that it has eight open roof terrace areas, located at various levels. All of these require further large transfer structures to be erected along with the main steelwork. Stability for the structure is predominantly derived from cross bracing and steel lift cores.

Waterhead is scheduled to open in November 2012.

Iconic structure for an oasis 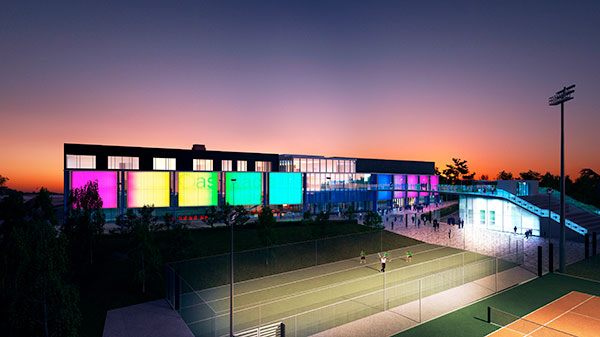 An LED facade will illuminate the structure 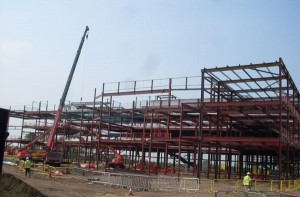 Other similarities with the Waterhead project include three on-site mineshafts which had to be grouted during the early works stage and the fact that the building is also a large steel frame. James Killelea is the steelwork contractor for this job as well, erecting 750t of steel during a 20 week programme that completed in late May 2011.

Consisting of 13,500m² of floor space, this academy is a large three-storey rectangular structure divided in half by a 800m² atrium. The brief for this academy called for an iconic building, one which architect Aedas duly delivered with an eye-catching main facade visible from the town below. This elevation includes ten LED-lit lightboxes, approximately 8m², programmable so they can change colour, adding a touch of originality to the project.

Using steel for this project’s structural frame has brought a number of benefits, including the much needed speed of construction.

“Erecting and designing this iconic structure would have been much more difficult with another material,” says Mr Lane. “Steel’s speed of erection allowed us to get the roof on and make the structure watertight in good time.” 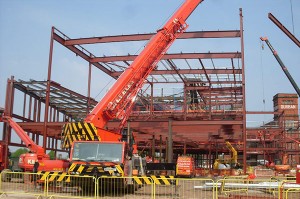 GCM Consulting designed this academy in two halves, with each wing (either side of the atrium) braced for stability and structurally independent.

‘There are a number of long spans in the project, a feature easier and more cost effective to achieve with steel,” adds Mr Griggs.

An unusual element to the Oasis job has been provided by a public thoroughfare which cuts right across the site. This right of way has had to remain open for most of the construction process, but its location has impinged on the Academy’s design.

The main structure is situated on one side of the path, while the school’s sports facilities are on the other.

“To avoid pupils having to exit the school and cross a public path, we’ve erected a steel footbridge which connects the school building with the sports pavilion,” explains Mr Lane. 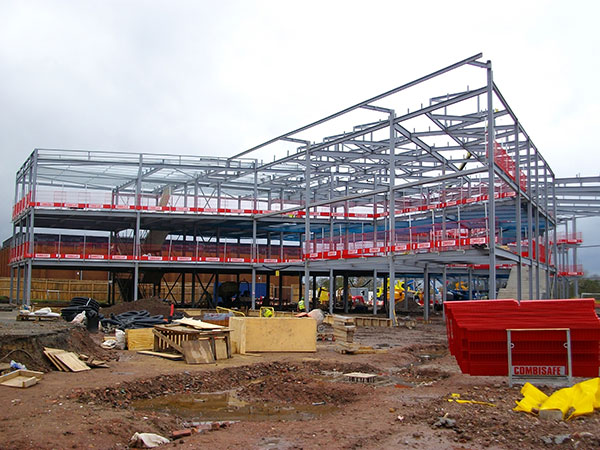 Steelwork was completed ahead of schedule

Client: Oldham Council
Architect: Aedas
Main contractor: Willmott Dixon
Structural engineer: GCM Consulting
Steelwork contractor: EvadX
Steel tonnage: 350t
Project value: £16M
The third of the academies being built by the team led by Willmott Dixon is the Oldham North Academy. This project got underway in July 2011 and is the smallest of the jobs, with the main frame requiring 350t of steel.

EvadX is the steelwork contractor working on this school and it completed its programme in just 7½ weeks; which was ahead of schedule according to Willmott Dixon. 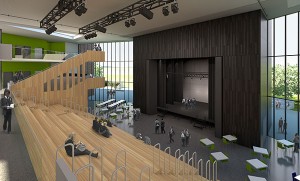 Impression of the school's Agora Theatre

It is being built on the playing fields of another local school, Our Lady’s High School. This school will be moving to new premises shortly, but in the meantime –  with construction taking place adjacent to a functioning school and one which is not getting the new buildings – the situation requires a great deal of diplomacy.

In places the construction site is only 10m from the occupied school premises and steel erection and tasks such as the cutting of metal decking have had to be done with utmost consideration to scholars.

The new school comprises of a central block housing a large auditorium with seating for up to 500, and two attached three-storey teaching block wings. Overall the shape of the 8,800m² structure is roughly triangular, and again steel is said to have been essential as there are a number of long span areas (auditorium) and differing classroom sizes and grid patterns. The academy is due to be completed in March 2013.